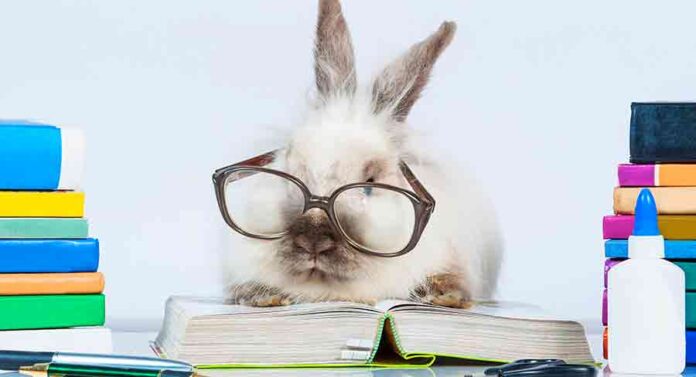 Are rabbits smart? Rabbits are surprisingly intelligent little animals! They can be taught tricks, to use a litter tray, and to recognize their name, similar to dogs and cats. However, this intelligence comes with some high care needs, including an increased need for mental stimulation. And, intelligence will still vary from one individual rabbit to another. So, your new pet bunny may be quicker or slower to learn tricks than your last one! Let’s take a closer look at the question “are rabbits smart?” and how their intelligence is expressed.

Since they are smaller than dogs and often cats, many people assume that rabbits will be less intelligent. In fact, some studies have tried to examine this comparison. One such study compared cats, rabbits and rats using tasks in a maze to study spatial working memory. The study concluded that cats performed “significantly more effectively” than both rabbits and rats, but stressed the limitations in measuring and comparing animal intelligence across different species.

Moving away from studies, owner experience is another way to assess bunny intelligence. Domestic rabbit owners will often be the first to tell you just how clever these little animals are – and with good reason! Many dedicated owners can teach their rabbits some brilliant little tricks, and even house train them.

Are Rabbits Smarter than Dogs?

It’s hard to compare intelligence across different animal species. But, rabbits can be taught many things that dogs can. For instance, many pet rabbits can learn their name, and can learn fun tricks. In fact, rabbits can be so talented at these tricks that there are official rabbit agility events for our pet bunnies to compete in! Like dog agility and show jumping in horses, rabbits complete a course full of different obstacles, such as going through tunnels, up and down ramps, and over hurdles.

Rabbits can also interact and show emotion just like dogs, although the body language they use to do so is slightly different. Many owners report that rabbits can be rather cunning and devious pets, using their intelligence to get their own way no matter what their owners say and do! So, for many people, rabbits are just as clever as dogs!

Can You Train a Rabbit to Use a Litter Tray?

House rabbits are increasingly popular pets. These are bunnies that live in your home with you, either with free rein, or in a dedicated, rabbit-safe part of the house. Many owners will successfully toilet train their house rabbit to minimize mess. To do so, they may restrict their rabbit’s space at first, until they are reliably using the litter tray. Then, they will slowly increase the rabbit’s living space. Most rabbits, once they know how to use a litter tray, will carry on doing so, although unneutered males may mark your house with urine spraying!

Can You Train a Rabbit to do Tricks?

As well as more practical things like house training, rabbit owners have successfully trained their pet bunnies to do fun tricks. This could be teaching a bunny to high-five, to spin in a circle, or even to come when they’re called! Like dogs and cats, most bunnies respond very well to positive reward training. This type of training is focused around rewards like tasty treats. It involves shaping your rabbit’s behavior and then proofing it against distractions, until you have a reliable cue and behavior pattern!

Bunnies can come to understand some human words. So, think carefully when choosing a cue for your bunny tricks. Choose something that isn’t too long and complex – short snappy commands work well!

All Rabbits Are Different

It’s important to remember that the question “are rabbits smart” is quite vague, and covers bunnies with all different personalities. Of course, each domestic rabbit will be slightly different to the next. So, some may be faster to learn tricks than others, and some may be quicker to house train. Even rabbits from the same breed can vary in their intelligence and general personalities!

Rabbits are also often known for being quite stubborn and wilful little animals. So, if you’re trying to teach your rabbit to do something it doesn’t want to do, or even if it isn’t in the mood to do it today, you may find your bunny refusing! Remember how we’ve already mentioned that rabbits can be quite cunning? Don’t be surprised if you see your rabbit using it’s clever mind to get around whatever restrictions and rules you try to lay down! Once a rabbit sets their mind on something, they often won’t stop until they get their way!

This can make training quite difficult. But, stick with positive reward methods, and work at your bunny’s pace. This is the best way to get the eventual results you’re looking for. Forcing your rabbit and pushing them to do something when they’re not in the mood will only increase that stubborn streak!

The Downside of Rabbit Intelligence

Of course it’s a great thing that our bunnies are so clever. It opens plenty of opportunities for bonding and fun games together. But, the downside of such clever little brains is that rabbits need a surprising amount of mental stimulation. In fact, one owner survey suggested that rabbits are often given inadequate care because owners underestimate the intelligence of their bunnies.

Domestic rabbits need plenty of mental stimulation, whether this is from training, games, or even interactive toys. But, they also need social stimulation. If you don’t have another rabbit at home, you’ll need to dedicate a lot more time to this. Social and mental enrichment will help to keep your bunny happy and healthy. Without enough, they can become stressed, depressed, and physically unwell. So, it’s important to be aware of these needs before committing to a pet rabbit. They can be a lot more work than people expect.

Are Rabbits Smart? A Summary

Do you have a rabbit at home who has learnt tricks? We would love to hear your own thoughts and experiences about bunny intelligence. What’s the best thing you’ve managed to teach your rabbit? Do you have any tips on how to keep a clever bunny happy and busy? Let us know in the comments!