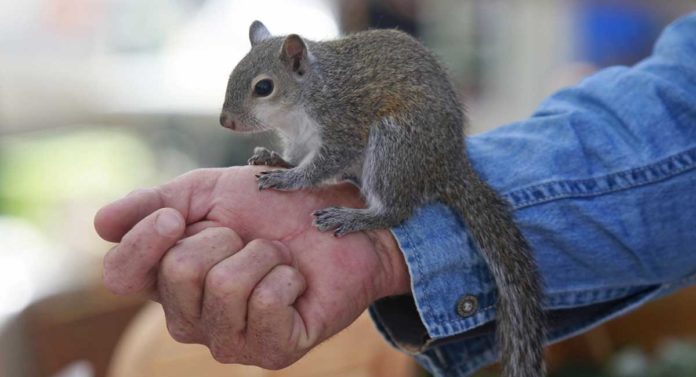 Can you keep a squirrel as a pet? Should you? Find out in the guide below!

Squirrels are adorable little critters that can be found scampering up and down trees all over the United States – and indeed, much of the world.

But can squirrels be pets? Do they make for good companion animals? The answer might surprise you…

Can You Keep a Squirrel as a Pet?

First and foremost, is it even possible to have a squirrel pet?

In most areas, no. In the majority of the United States, and in many areas around the world, keeping a pet squirrel is illegal.

This is because squirrels are considered wildlife, and in most cases it is illegal to keep wild animals as pets.

Laws do vary, so you’ll want to check with authorities in your area. The US Fish and Wildlife Service is a good resource, as are local wildlife rehab centers in your area.

We’ve answered can you keep a squirrel as a pet, but should you?

Even in areas where it is legal to keep a pet squirrel, we do not recommend it.

Squirrels are wild animals. They are not very compatible with domestic life.

Squirrels tend to be messy and destructive, spreading food scraps, feces, and urine throughout your home. They like to keep their living space clean – but they do not care much about your living space, and will throw everything out of their cage onto your floor!

Squirrels also have very sharp claws (used to penetrate bark while climbing) that can result in nasty scratches. They can bite frequently, and have sharp teeth.

What to Do if You Find an Injured or Abandoned Squirrel?

If you are wondering can you keep a squirrel as a pet because you found an injured or orphaned squirrel, this section is for you.

First and foremost, squirrel-rehab.org is a great resource. You can also send a blank email to [email protected] to get emergency care instructions.

The only time when it might make sense to keep a pet squirrel is if the animal is injured or disabled enough that it would not survive in the wild.

If you come across a seriously injured squirrel, or a very young squirrel whose parents are clearly deceased, you should contact an animal rescue in your area.

See this page for a list of squirrel rehab facilities. You can also check with the wildlife rehabilitation directory.

Local animal shelters or wildlife rehab programs may be able to take the squirrel in. If not, you may consider nursing the squirrel back to health.

Ideally, the squirrel should be released when it is healthy, but in some cases it may not be able to survive on its own.

Yes, squirrels bite frequently. They do not have the bite inhibition reflex that domesticated animals – like dogs – possess.

This basically means that while a dog has the instinct to bite sometimes, they also have an ingrained trait that says, “Maybe I shouldn’t bite this person.” Squirrels do not possess this trait, as they are wild animals.

Pet squirrels who have been around humans a lot will often stop biting. However, they’ll still chew on household items if given the chance.

Are Squirrels Good With Kids?

Squirrels are wild animals, and will often be unable to distinguish between a real threat and a simple overreach by a human. Since kids are often unintentionally rough with animals, the squirrel may become aggressive.

And it’s not just the child who may be in danger. The squirrel’s small size means that a child could easily harm or even kill it unintentionally.

We do not recommend keeping a pet squirrel in a household with children (or in any household, for that matter).

No, squirrels are diurnal, meaning they are primarily active during the day.

Squirrels eat a fairly specialized diet. While we may think of them only eating nuts, they actually eat fungi, seeds, fruits, nuts, small insects, caterpillars and more.

In the wild, squirrels forage for themselves, and will also eat food scraps from humans. In captivity, it is up to the owner to feed the squirrel a balanced diet.

You’ll need to get a very large pet squirrel cage so that the animal has plenty of room to move around. You’ll also need to ensure your squirrel has several hours per day outside of the cage to move around.

Treating health concerns can also be tricky, as most vets have little to no training in taking care of squirrels.

If you end up in the situation of owning a pet squirrel that can’t be released, you should call around to vets and animal rehab facilities in your area – before something goes wrong.

That way, if your squirrel has a health problem, you can immediately know who to call.

The lifespan of a squirrel can vary significantly. In the wild, healthy adults may reach an average age of around 6 years – although in some cases, they have been recorded as having lived 12 years.

In captivity, the longest squirrel lifespan on record was 20 years. However, 10-12 years is more typical.

How to Get a Pet Squirrel

If you’re wondering where to get a pet squirrel, that depends on where you live.

In some countries, squirrels are legal to keep as pets and you may be able to find them at pet stores. You can search Google in your local area to find out where to buy a pet squirrel.

In most of the United States, keeping a squirrel as a pet is illegal, so the answer to “Where can I buy a pet squirrel?” is moot. You will not be able to buy pet squirrels from any reputable pet shop.

In certain cases, you may be able to rescue an injured squirrel from an animal shelter or wildlife rehabilitation program. However, typically these programs only release squirrels to trained and dedicated wildlife handlers.

Do squirrels make good pets? No, not usually.

Can you keep a squirrel as a pet? Only in very specific cases, such as when the animal is seriously injured and would not be able to survive on its own.

And even in the case of the squirrel being injured, it would probably be better off in the hands of a trained animal rehab expert.

Squirrels are wild animals and are happiest and healthiest in the wild.

So in the end, we do not recommend keeping squirrels as pets.

A lot of people ask, can you keep a squirrel as a pet – but really, the question ought to be “should you.” And the answer to that is a definite no.