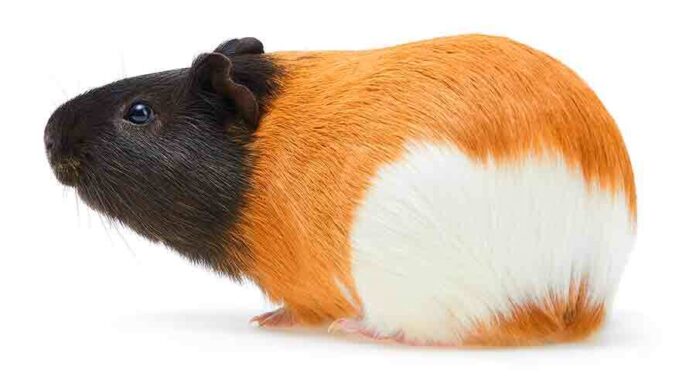 Do guinea pigs have tails? Have you ever been playing with your guinea pig, only to realise they don’t seem to have a tail? Guinea pigs don’t have tails, but they do have tailbones (caudal vertebrae). None of these vertebrae will protrude to form a visible tail. If your guinea pig appears to have a long tail, it’s likely that their fur is simply falling to give this appearance. So, you don’t need to worry if you can’t find your guinea pig’s tail, because they aren’t meant to have one!

Guinea pigs are rodents – so it’s natural to assume that they have tails. After all, rats and mice have pretty long tails, and they’re rodents too! But, guinea pigs fall into the Caviidae family of rodents. And, most of the rodents in this family have similarly stocky bodies with no tails, or with vestigial tails.

Wild cavies, like domestic guinea pigs, don’t have tails. But, if you take a closer look at guinea pig skeleton anatomy, you’ll notice that they do have tailbones (caudal vertebrae). Some cavies might look like they have tails – usually those with longer fur, like the Peruvian guinea pig breed. But, this is usually just an illusion of their long fur. It won’t be a real tail, like the ones rats and mice have!

Why Don’t Guinea Pigs Have Tails?

So what’s this about? Why don’t guinea pigs have tails in the wild or when kept as domestic pets? As we mentioned earlier, some guinea pigs and other members of the Caviidae family have vestigial tails. This simply means that their tails have been lost or become functionless over a long period of time, due to evolution.

So, the ancestors of our domestic guinea pigs would likely have had much longer, more noticeable tails. In the wild, these long tails may have been easier for predators to grab hold of when hunting. So, cavies with shorter tails would have been more likely to survive and pass on their genes. Both wild cavies and domestic guinea pigs have no true need for tails. In fact, both are thriving without them, as are many other members of the Caviidae family.

Can Guinea Pigs Have Long Tails?

Our piggies don’t have visible tails. But, as we now know, they have tailbones. In fact, guinea pigs have 7 caudal vertebrae – which sounds like a lot! But, bear in mind that rabbits, who have very short fluffy tails, have 15 caudal vertebrae. And rats have somewhere between 31 and 36! So, in comparison, our guinea pig pets still have quite few. These vertebrae will also curve inwards, rather than jutting out to form a proper tail.

However, this doesn’t mean that guinea pigs can’t appear to have tails. In fact, many guinea pigs have long tufts of fur on their rear that can look quite a lot like a tail. This is more common in guinea pig breeds with long fur, like the Peruvian guinea pig. But, when you feel their “tail”, you’ll see it really is just fur.

Since guinea pigs don’t have tails, you don’t need to worry about giving their tail any special care. They may have some long fur in this area that sticks out and looks like a tail. But, you can easily look after this with regular grooming and cleaning to ensure it doesn’t get dirty.

Instead, it’s a great idea to focus on the health of your guinea pig in general, to ensure they develop into the healthiest possible cavy. So, make sure they’re getting enough exercise and mental stimulation. Guinea pigs are very social animals, so can become stressed and unhappy if they are kept on their own. And, make sure they are getting a well balanced diet, to encourage healthy growth and development of their muscles and bones.

Do Guinea Pigs Have Tails? A Summary