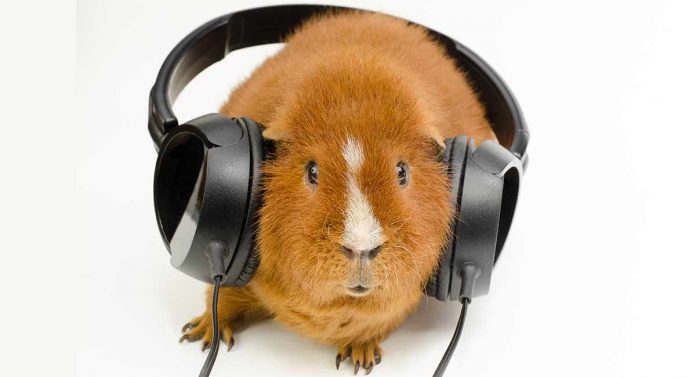 All around the Internet, guinea pig owners are asking, “Do guinea pigs like music?”

It is not at all uncommon for humans to love music, and sometimes we have a tendency to listen to it very loudly! Some of us might even play music ourselves.

Do these human tendencies run the risk of harming our furry friends, or do guinea pigs enjoy music just like we do?

What if you love having music vibrating through the house? Should you re-think your stereo setting because of your guinea pigs?

Or should you even go as far to re-home your pets because of how important music is to you?

We’ll answer all your question about guinea pig music in this article. We will discuss the evidence behind guinea pigs liking music and explore if it can be harmful.

Because they live with humans, every guinea pig is bound to listen to music at some point or the other. But do guinea pigs like music?

Truthfully, there has not been any in-depth, scientific research done on this matter.

However, it is likely that the answer to “Do guinea pigs like music?” lies in how they communicate.

Just like most animals, guinea pigs communicate through a variety of verbal and non-verbal cues. Verbal communication sounds include whistling, purring, and chirping.

It is likely that guinea pigs interpret music through their innate understanding of these sounds.

In other words, if a song contains a lot of high-pitched singing or whistling, it is likely that your guinea pig would interpret it as being excited. This interpretation might make them excited themselves and more active.

On the other hand, if the instrumental part of a song resembles chattering, your guinea pig might think that a very large nearby animal is angry. This thinking might cause them to become angry or fearful.

Guinea pigs likely interpret music differently depending on what it sounds like.

Because of this difference in interpretation, some music might be relaxing guinea pig music while other songs might cause stress and fear.

It depends on the specific guinea pig’s personality and taste. Just like people, some guinea pigs might be more sensitive to the specific type of music than others.

It is important to observe your own pet to figure out their own genre of soothing music for guinea pigs.

There are countless YouTube videos out there that claim to contain calming music for guinea pigs.

However, as we’ve previously discussed, what music your guinea pig likes depends a lot on their specific situation and personality.

Still, your guinea pig might find some music calming, which can be helpful to soothe your pet during stressful situations.

To figure out what music your guinea pig finds calming, it is important to test out various genres beforehand.

You might wish to start with music that is advertised to be calming to guinea pigs.

But, do not limit yourself to this music only. Try classical music and softer music as well.

It is probably best to avoid louder and more aggressive music, however. This type of music can cause stress and fearfulness in your guinea pig. 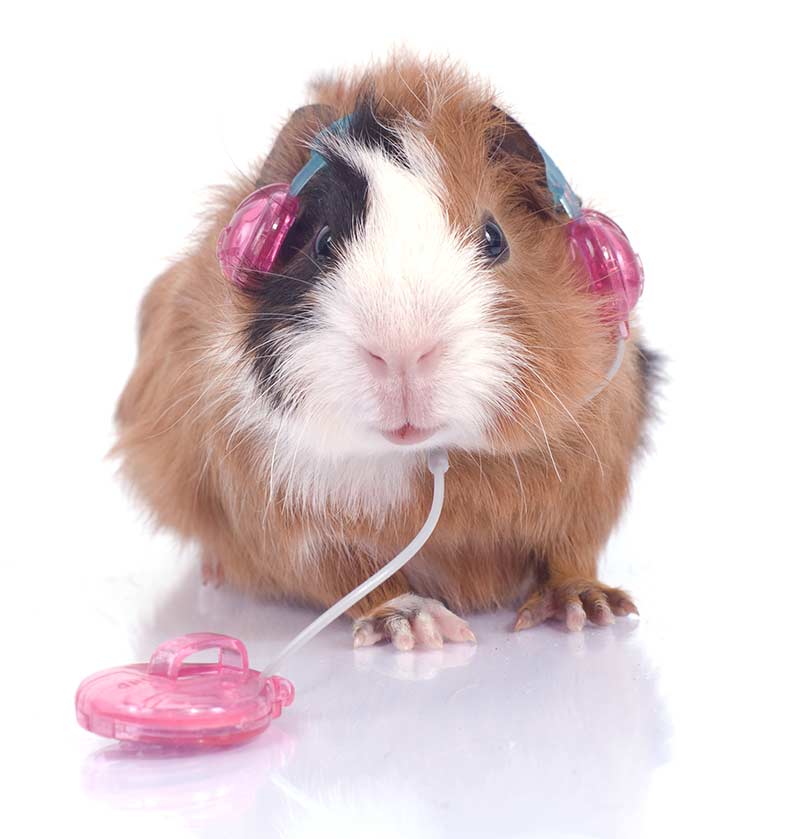 On your quest to discover the answer to “Do guinea pigs like music?”, you might be wondering if music could be harmful to guinea pigs.

One such study found that the inner ear of a guinea pig can be damaged when listening to particularly loud noises. This means that loud music can damage your guinea pig’s hearing.

However, a different study found that this inner ear damage is naturally reversible – at least partially.

Therefore, having your music up too loud once or twice is probably not going to cause lasting damage to your guinea pig’s hearing.

On top of this, another study found that guinea pigs protect themselves from further damage after their inner ear has been damaged by loud noises.

Because of this, it is likely that loud music probably will not damage your guinea pig’s hearing significantly.

Does this mean that it is okay to listen to your music however loud you want with your guinea pig?

On top of this, guinea pigs have sensitive hearing and might become stressed or uneasy when around loud noises.

This stress can cause increased susceptibility to diseases and parasites.

High levels of stress can also cause a guinea pig to be unable to process vitamin C correctly. This can cause all sorts of nutritional and physical problems.

As you can see, the answer to “Do guinea pigs like music?” is somewhat more complicated than some might first think.

Some pet owners swear that their guinea pigs love certain genres or songs. But, there is not currently any scientific evidence showing that guinea pigs like music.

Some guinea pigs might enjoy certain songs or rhythms because they remind them of friendly guinea pig noises.

Observing your guinea pig’s behavior can help you decide if they enjoy the music or not.

Remember though, no matter what you listen to, you should never listen to music very loudly with your guinea pig. This can cause inner ear damage over a long period and can cause stress.

If you need some ideas about what sorts of music to listen to with your furry friend, this video will lead you to other videos of guinea pigs listening to music, music and more music.

What do you think? Do guinea pigs like music? Do yours? Let us know in the comments below!