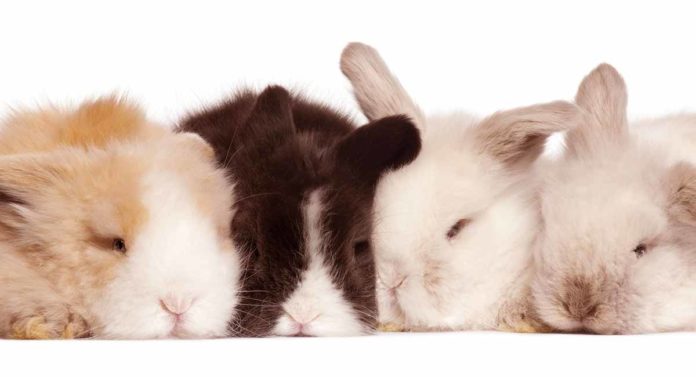 Rabbits do not hibernate, because they have adapted to find enough food and stay warm throughout the winter and remain active.

However their adaptations aren’t perfect, so pet rabbit owners still need to take special care of their rabbits in the winter months.

With cold weather looming, are you wondering if rabbits hibernate in the winter?

And if not, where do they go when it’s cold outside?

In this article, we’re going to look at what hibernation is. Why do some animals hibernate?

Then we’ll answer the question “do rabbits hibernate?” in more detail, examine why they don’t.

But first, let’s learn more about the act of hibernation and why animals do it.

Hibernation is a state of prolonged inactivity, coupled with all the chemical reactions inside an animal’s body slowing right down.

It is a survival response to the changing of seasons and changes in the availability of resources such as food.

Some hibernating animals do move around, depending on temperature.

But they don’t engage in important life processes such as feeding or mating.

The Purpose Of Hibernation

Fat deposits they accumulated before the cold weather set in can last throughout winter if they keep their activity and metabolism to a minimum.

The ability to hibernate varies among species and even individual animals.

Wild hamsters hibernate, for example. Yet wild mice, rats, and guinea pig species do not.

Many reptiles and amphibians hibernate because they are cold-blooded, and low temperatures might otherwise kill them.

Some famous “hibernators” don’t actually go into true hibernation at all.

Bears for example, go into a deep normal sleep following only a slight temperature reduction. This torpor allows them to continue to care for cubs or react to danger, and it isn’t really hibernating.

True hibernation generally refers to a deep dormant state from which it’s hard to wake an animal.

So now you want to know – do rabbits hibernate?

The answer is no. Rabbits are not among the animal species that hibernate.

Why rabbits don’t have this adaptation is difficult to say.

Scientists believe hibernating began with a long-extinct ancestor of many modern mammal species.

Some of their descendants have kept up the tradition, whilst others have moved towards remaining active all year round.

Hibernation is a survival adaption for animals that can’t find enough resources to survive the winter otherwise.

But it comes with risks – hibernating animals are vulnerable to predation, running out of fat supplies, and succumbing to hypothermia.

Rabbits are somewhat adapted to find enough food and stay warm in winter, so they can stay active.

However, you may see less of them during the winter months.

They still conserve energy and avoid being spotted by predators in the leafless undergrowth by hunkering down in their burrows for much of the day.

How Do Rabbits Survive the Winter?

The harsh reality is that many rabbits don’t survive the winter.

In fact, cold weather is a significant control of rabbit populations.

Rabbits have relatively inefficient digestive systems. And in the winter they have a harder time finding the forage they need to keep themselves healthy.

In cold environments they dig under the snow for food, or eat tree bark, twigs, and other available, woody plant material.

They also practice coprophagy, or eating their own feces, more often during this time of year, as they can get extra nutrients from their droppings.

Additionally, with food being scarce for predators of rabbits as well, they are hunted more often by birds of prey, cats, and other animals.

Yet, with all the brush cover gone, it’s harder for bunnies to hide.

Some bunnies do have coats that change color and become thicker to blend with wintry landscapes and help them survive.

Snowshoe hares are among the breeds that turn white in winter to better camouflage themselves.

Cottontail rabbits, often found in eastern, midwestern and south-central U.S. states, have an average lifespan in the wild of about 1.5 years.

Researchers have found that only about 30 percent of wild rabbits survive over the winter, whether they live in urban or more rural environments.

Weather and the lack of food during winter contributes to their high mortality.

Yet Cottontails are among of the most commonly found mammals in the country, despite their death rate of up to 80 percent per year (predation, car collisions, and habitat loss all contribute to this rate too).

They remain so numerous because the females have short pregnancies and can conceive again within hours of giving birth.

But not all rabbits are so lucky.

Almost two dozen lagomorph species, which include rabbits, are vulnerable or endangered, according to the International Union for Conservation of Nature’s (IUCN) Red List.

What About Domestic Rabbits?

Because rabbits don’t hibernate, don’t expect your pet bunny pal to slow down during the winter months.

In fact, rabbits like the cold and may have more energy and playfulness in the winter! All that fur makes for good insulation.

Rabbits are more in danger of heat exhaustion than cold-related illness.

In the summer you will want to make sure they have access to cool places and plenty of water.

Caring For Your Rabbit In Winter

If you keep bunnies outside you’ll still want to bring them indoors during very cold weather.

They like 40-50 degree Fahrenheit temperatures and can even survive zero degree temperatures as long as their habitat is dry with no wind and there’s plenty of insulating fiber around.

Still, prolonged exposure to that kind of weather can be dangerous, so take them inside it if gets too cold out.

Do Rabbits Hibernate? A Conclusion

Rabbits do not hibernate.

Perhaps as a result, a majority of them do not survive the scarcity of food that comes with winter.

This is sad, but it is part of nature. To console yourself, we recommend hugging your bunny and keeping her indoors this winter!

House Rabbit Society (2017). Keep your rabbit cool in the summer.