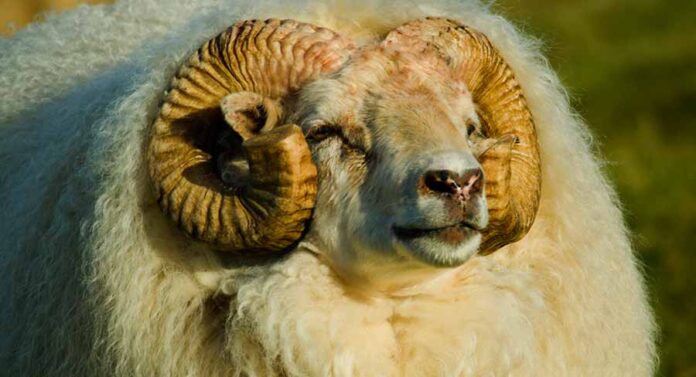 When we think of sheep, most of us think of domesticated sheep raised for food and clothing. However, did you know there are over 1,000 different breeds of sheep throughout the world? Sheep range from domesticated farm sheep to the wild sheep many of us have seen roaming the mountains regions of Northern America.

If you live and work in a city or town, you probably only ever see sheep occasionally and from a distance. Fluffy dots on the hillside, with white cotton bodies and bobbing heads. It would be easy to assume from a distance that sheep don’t have horns, but some do!

Sheep are four-legged mammals that often have thick, wooly coats. Not all sheep are domesticated, but the sheep we commonly think of when asking do sheep have horns are the domesticated sheep in the genus Ovis.

Different sheep species can range in size, weight, and appearance. They often stand around 46 inches in height and can weigh between 80 and 400 pounds depending on the species. Most sheep have a decent lifespan of between 10 and 12 years both in the wild and in captivity.

Due to their behaviors and many common misconceptions, it’s often thought that sheep are unintelligent. The truth is actually quite the opposite! In fact, sheep are highly intelligent animals and can solve problems and build emotional bonds with one another. They are even capable of communicating different emotions to one another using unique vocalizations. Who knew!? Another interesting fact about sheep is that while many of them have horns, not all of them do. So, why do some sheep have horns while others don’t?

Do Sheep Have Horns?

Many sheep do have hollow horns that grow in a curling motion out of the top of their head. For most species of sheep, it is typically the male that grows horns, though some female sheep in other groups or breeds can also grow horns.

Sheep horns are made of the same material as our fingernails are made of, and sheep use their horns as tools to help them eat or even fight if they need to. Male sheep often grow longer horns than females and, depending on the species, some sheep can grow horns that are over three feet in length.

Although a sheep’s horns can continue to grow throughout the sheep’s lifetime, they typically don’t appear until later in the first year of a sheep’s life. Once they emerge, sheep horns will grow rapidly between the first and third year of a young sheep’s adolescence.

Of course, not all sheep grow horns. But why do some sheep have horns while others do not? The factors that determine whether or not a sheep will develop horns include genetics, gender and breed.

Sheep breeds with horns include:

If you have dogs, you have likely heard of lamb horns. These chews are not bone and, as we mentioned above, are instead made of the same thing as our fingernails are. This substance is called Keratin.

Though these horns are called lamb horns, they are not necessarily from lambs. As we mentioned above, lambs (AKA immature sheep), don’t develop horns until they reach early adulthood. This typically takes place in the first year of their life. Sheep typically take about six months to mature fully, and sheep under the age of six months are considered lambs. During this time, they will likely not have fully developed horns.

Long horn sheep, also known as bighorn sheep, are some of the most popular wild sheep found throughout the United States. Some of the traits that make these sheep so famous are their unique horns. Bighorn sheep are common throughout North America and typically live in our mountainous regions where they are known for scaling steep rock faces and cliffs.

Large, muscular, and agile, big horned sheep are not the average domesticated wooly sheep you may be familiar with. In fact, they are much larger than domesticated sheep and full-grown males often weigh closer to 300 pounds.

When asking do sheep have horns, we should note that both female and male big horned sheep have horns. Males can have much larger horns that grow in a half-circle shape. Because these horns continue to grow throughout the male’s life, the horns can continue to curl around his head.

Female horns tend to be smaller than male horns, though different species of sheep can grow larger horns. Genetics can also play a large role in the ewe horn size, as we have mentioned. Like all sheep horns, ewe horns are hollow and made of keratin.

Some sheep have horns, but not all of them. There are over 1,000 different species of sheep throughout the world and not all sheep are capable of growing horns. On the flip side, some sheep not only do grow horns, but they can grow multiple horns on their head.

Horns are not the same thing as antlers. In fact, antlers are made of bone while horns are made of keratin. Animals that grow antlers include moose, caribou, elk and deer. Antlers are also an extension of an animal’s head, which makes it even more interesting that antlers are commonly shed throughout the year.

Horns, on the other hand, are not shed and can continue to grow for the entirety of the animal’s life. Along with sheep, other animals that can grow horns include bison, Rhinoceros, Antelope and more.

What do you think about sheep and their horns? Did you realize their horns were made of the same material as our fingernails or that sheep horns are hollow? Why not share your thoughts with us on sheep horns in the comment section below. 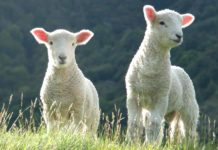 ABOUT US
News, tips and advice on caring for your pets. From best selling author Pippa Mattinson and her team
Contact us: enqu[email protected]
FOLLOW US
© Red Cat Media Ltd 2018