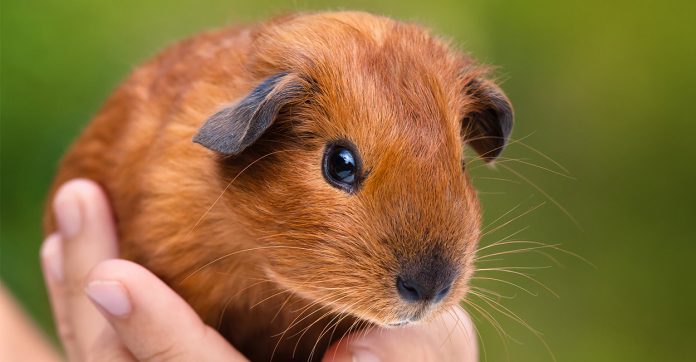 Oh how cute guinea pigs are! From hairless to short haired guinea pig breeds to long or curly-haired ones, there is endless wonderful variety to enjoy in the big wide world of cavies!

Some breeders spend their whole life perfecting their breeding lineage for just one type of short haired guinea pig! This is because these compact, intelligent and affectionate pets each have their own genetic history that unfolds yet again in fresh ways each time a new baby pig is born.

When you understand the basics of how guinea pig DNA works, just looking at your guinea pig can be like reading their personal history book!

This is exactly what we are going to delve into in this article. We will learn all about short haired guinea pig breeds and why their hair looks the way that it does!

Before we dive in, let’s get a quick working knowledge of some common terms. DNA, of course, stands for deoxyribonucleic acid.

DNA is what is inside chromosomes, and chromosomes make up genes. And genes are what make you!

The specific genes you have combine together to form your “genotype,” which is just a fancy way of saying “the DNA in an individual.” So, for instance, you have your own genotype, which is the unique collection of DNA you inherited from your parents.

Genes inside your guinea pig’s genotype come in two types: dominant and recessive. The dominant ones are more commonly seen because only one parent pig has to pass it along in order for it to show up (“express”) in a baby guinea pig.

Recessive genes are less commonly seen because both parent pigs have to pass it along in order for a baby guinea pig to be born expressing that gene.

The official name for which genes express in any given baby guinea pig is called the “phenotype.”

So let’s say you have brown hair and green eyes and a calm personality. These are the genes out of your genotype that have come forward as your phenotype to create your unique self!

Your guinea pig also has a phenotype. Perhaps your short haired guinea pig has red-brown smooth fur and brown eyes and is very chill.

This is his phenotype – out of all the genes in his genotype, these are the ones that have come forward to express as him!

A quick summary of the genetics

So here it is in a nutshell:

Got it? Awesome! So now let’s dig deeper and take a look at the genetics of short haired guinea pig breeds!

To take a specific look at how guinea pig genes express through fur color, you might really enjoy reading through this informative article.

At this point you may be wondering, what genotype would a heterozygous, short haired guinea pig have?

This takes us down one level in the discussion of genotype and dominant and recessive genes. Each guinea pig gets two copies of each gene it receives from its parent pigs. Each gene can express in different ways.

The same gene with a different expression is called an “allele” (sometimes, it is also called a “factor”).

So let’s say we have a gene for guinea pig hair length.

Here are a few very simple examples (genetics can get a LOT more complex, but unless you plan to breed piggies, you may not want or need to know all the complexities).

This is how short haired guinea pigs can end up having long haired babies!

So now let’s return to the question we asked at the start of this section: what genotype would a heterozygous short haired guinea pig have?

In summary, the hair type your guinea pig inherits pretty much hinges on what alleles she gets from her parents when she is born as follows:

Finally, it is also vital to remember that genetics itself is a field of study where there is always more to learn and discover. This is why new improvements in even very established guinea pig breeds can happen at any time – exciting!

So now, with DNA out of the way, let’s take a look at different short haired guinea pigs, their similarities and differences!

These short haired guinea pig breeds are each the same in their genotype in one important way – they all have short hair. But, they are also quite different in other aspects of their breed genotype.

One important difference is that some breeds are “self” (solid color smooth hair) and others are “non-self” (colors, patterns, points) guinea pigs. 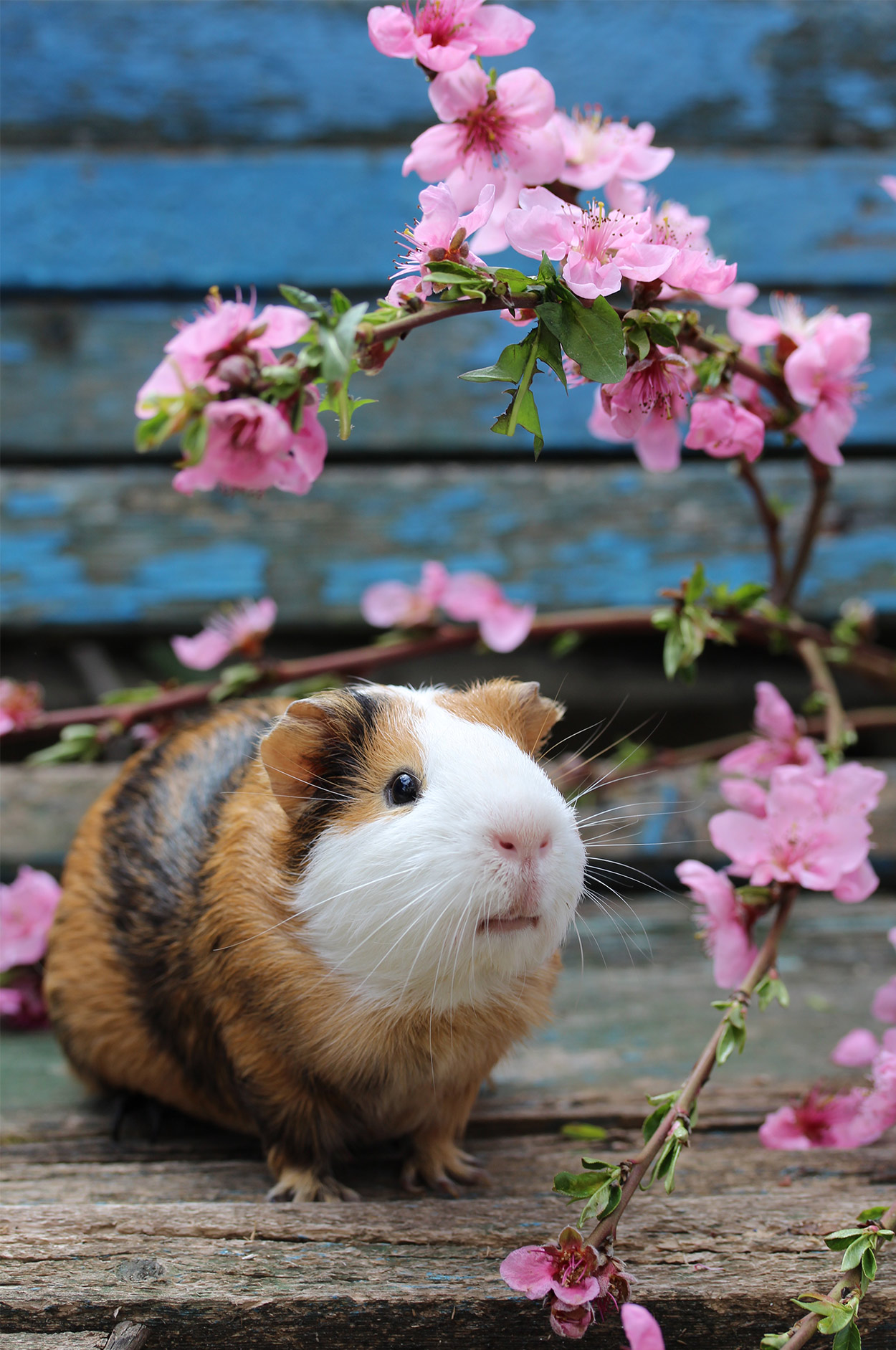 The American short hair guinea pig is one of the most common and popular of all guinea pig breeds. It is sometimes called the English short hair.

Sometimes in shows you will see these guinea pigs called by their coat coloration with the designation “short hair” following, such as “self chocolate short hair.”

This piggie has short, smooth, soft fur that is easy to care for. The fur can be matte or satin. This breed may shed less than other guinea pig breeds, which can be very nice!

It also has a lovely, calm, agreeable personality that makes it a perfect pet choice for first-time guinea pig owners.

The American crested is also sometimes called the English crested or the White crested guinea pig. Technically, however, these are three separate short hair breeds.

The distinguishing difference in these breeds is the presence of the forehead crest, which can be a single contrasting color from the rest of the coat or pure white.

These are striking guinea pigs that look both cute and somehow elegant too.

The Abyssinian guinea pig is said to be the breed that most closely resembles now-extinct wild cavies! The “Aby,” as it is nicknamed, is distinguished by its rosettes (whorls) of fur and is one of the most ancient breeds.

However, this is still considered to be a short hair breed! There may be as many as 10 evenly-spaced rosettes set against a bi-color or tri-color fur pattern.

The Abyssinian guinea pig can have short matte or satin fur. But the rosettes mean more meticulous and frequent grooming to keep your piggie’s fur smooth and free from tangles.

These pigs have lots of energy and need plenty of daily exercise and play to stay happy and healthy.

The Teddy guinea pig is often said to be the “teddy bear” of the guinea pig breeds world because of its short, fuzzy fur. It doesn’t mat, but still needs lots of brushing for healthy fur and skin.

These guinea pigs also have a really cute upturned nose that is sometimes called the “Roman nose.” Their ears droop downwards and can build up wax, so you will need to carefully clean their ears every so often.

The Teddy guinea pig is said to have come from a cross between the American and Abyssinian guinea pigs, with a rogue recessive gene that causes a kinky coat.

The short, rough coat of the Rex guinea pig is quite fuzzy. The coat grows to an even length of around one-half inch so they look quite cuddly (and feel so too!).

The Rex’s hair is very thick, so it needs lots of brushing. This pig’s nails need frequent trimming, since they can grow quite fast compared to other guinea pig breeds’ nails.

The Rex and Teddy guinea pig breeds look a lot alike. However, the Rex coat is coarse and the whiskers are curly, while the Teddy bear’s whiskers are straight.

The Himalayan guinea pig is nicknamed the “Siamese cat” of guinea pigs. This is due to its short, mostly white, smooth coat at birth.

The coat color can change over time, however. This guinea pig has distinctive dark red eyes but is not albino.

One really interesting feature of this guinea pig breed is that their accent colors (“points”) can be different depending on the ambient temperature of their surroundings as they grow up!

This relatively rare short haired guinea pig has one distinguishing feature: its nearly one-inch (25mm) long “ridge” of long fur along its back, from which it gets its name.

If so, we hope you have found this information helpful to select your lucky guinea pig!