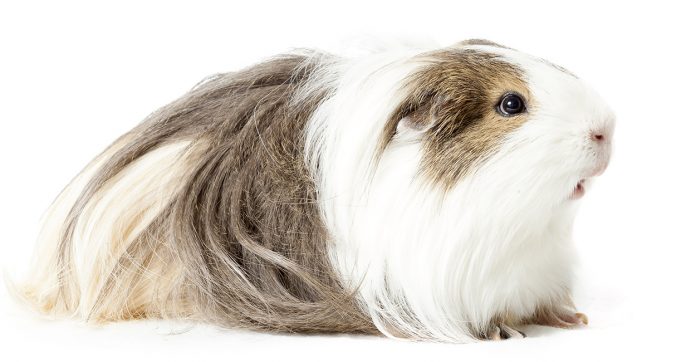 Today we are going to take a look at the gorgeous world of Silkie Guinea Pigs!

You’ve made the first step toward owning a pet—deciding what kind you want.

A guinea pig is the best fit for your lifestyle, but now you must make the decision on what kind of guinea pig you want.

Is a Silkie Guinea Pig a good fit for you?

What are Silkie Guinea Pigs?

Guinea pigs, despite their name, are not from Guinea nor are they pigs. They are from the cavy family and are commonly called cavies in the guinea pig community.

Guinea pigs and their history of domestication traces back thousands of years to South America.

It wasn’t until around 300 years ago that guinea pigs made a splash in Europe, quickly becoming a household pet.

The Silkie variety was first seen in the 1930s when it was discovered in Peruvian Guinea Pig litters. Despite the Silkies’ discovery, it wasn’t recognized as a distinct and separate breed until the 1980s.

The Silkie variety, like the Peruvian and the Coronet varieties, is long haired. However, the Silkie is distinct because their hair flows from front to back rather than along the spine.

Guinea pigs are one of the larger pet rodents. They range from 1-3 pounds and can get anywhere from 8-16 inches long.

Breeds of guinea pig that have long hair, like the Silkie, tend to look slightly bigger than a short haired breed. This is because of the voluminous and luscious hair that covers their bodies.

Though they are smaller pets, they are full of personality and spunk – sure to keep you on your toes!

There is a huge variety of colors that the Silkie comes in, from white, black, red, brown, and gray. With 10 different combinations and variations of these colors, each Silkie Guinea Pig has a unique coat.

The most basic is called Self, which is when only one color is present. The other combinations of colors are Dutch, Brindle, Tortoiseshell, Tortoiseshell and White, Roan, Agouti, Dalmatian, and Himalayan.

One of the appeals of the Silkie Guinea Pig is how soft, lovely, and shiny their hair is. To keep their hair beautiful and healthy, constant maintenance is required.

This means brushing your Silkie daily, if not twice a day. Constantly brushing will help prevent potential health issues such as mats and hair blockages.

Grooming frequently also allows an owner to watch for any skin conditions that may surface.

Guinea pigs do not usually need baths. Baths should only be performed if their coat has urine or feces on it.

Brushing a Silkie is best done with a fine-toothed comb and a brush. A gentle bristled or baby brush are the best choices.

Gently run the comb through the hair following the direction of growth. Make sure you comb all the Silkie’s hair!

In order to comb all of the hair, portion it out in sections, or pass over a single section multiple times.

When using a brush, make sure to brush lightly to avoid scraping the guinea pig’s skin.

Be sure to treat your Silkie after brushing and combing! A small piece of their favorite fresh vegetables like broccoli, cucumber, or carrot will positively reinforce the experience.

Fruit is also a good option but should only be fed once a week as a treat.

Like many animals, personalities vary from animal to animal.

Silkie Guinea Pigs are the gentlest of the breeds. They come off as shy and a bit timid. It takes time to build a bond with them.

Utilizing a favorite snack, like a carrot or other vegetables, speeds up the socializing process. Gradually they will begin to come out of their shell and associate treats with interactions.

They will look forward to your company!

Once this trust is established, a bond forms. This bond is one that will last a lifetime.

Finding a good routine of brushing is crucial to maintaining the health of a Silkie. Longer haired animals need constant grooming to avoid potential health problems.

Beyond the addition of taking care of their long hair, Silkie Guinea Pigs require the same things that other breeds require.

A large open-air cage that is at least 30 inches by 36 inches without mesh or wire flooring is ideal for one guinea pig.

As guinea pigs like to hide, safe hideaway spaces need to be provided. Plastic igloos, wooden cubes, and fabric styles are available at most pet stores.

Hay and pellets must always be available, along with fresh water. Vegetables should be fed daily, especially leafy greens like romaine and red leaf lettuce. Fruit is okay as a weekly treat.

Guinea pigs can’t produce their own vitamin C, so it needs to be supplemented in their diet. It is best to incorporate vitamin C using leafy greens and vegetables, but vitamin C supplements are available for guinea pigs at pet stores.

The lack of Vitamin C in guinea pigs can lead to scurvy, which can cause additional health issues such as joint problems, skin and coat issues, and ulcers and bleeding.

Other common health problems in guinea pigs can range from diarrhea to urinary problems and parasites.

Guinea pigs can develop pneumonia quickly, especially when they are stressed, and it can become a significant problem.

Diarrhea can be fatal in guinea pigs if not properly treated. Also, guinea pigs are susceptible to bladder, kidney, and ureter stones, which can cause lethal blockages.

Because their teeth grow all their life, guinea pigs need things to gnaw. If teeth grow too big, they can cause injury and infection.

They can also get bacterial and fungal infections, and may develop skin and mammary tumors.

You’ll need to watch for signs of obesity from overfeeding. Guinea pigs can develop additional problems when overweight. 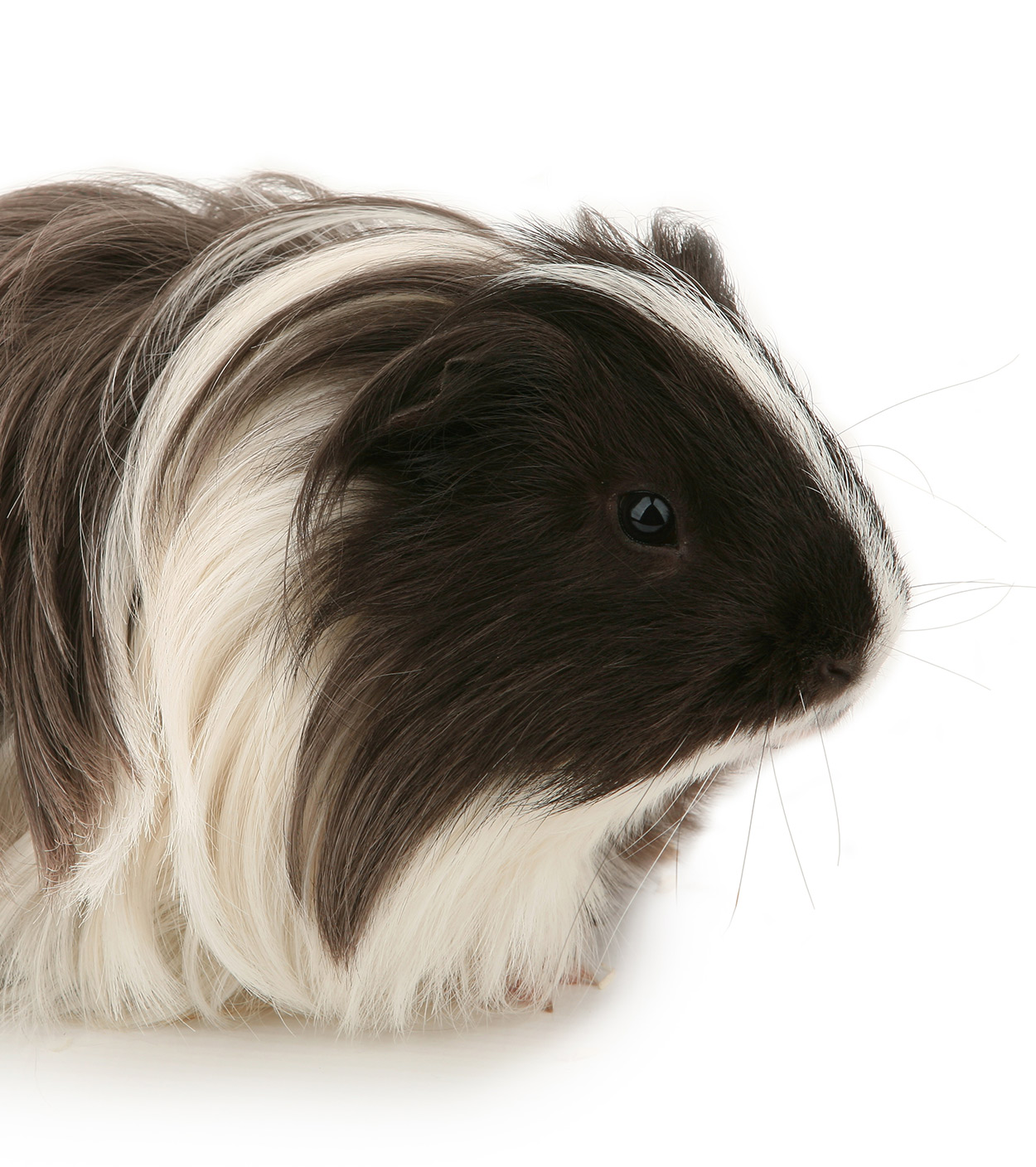 The Importance of Vigilance

As guinea pigs are prey animals they are very good at hiding illness. By spending time daily with your Silkie Guinea Pig, you can detect and prevent any condition that arises.

If you suspect your Silkie Guinea Pig is coming down with any illness, take them to your veterinarian right away.

The sooner you take your guinea pig to your veterinarian, the chance of effectively treating the illness greatly increases.

Before you get a Silkie Guinea Pig companion, make sure you have a local veterinarian who treats guinea pigs.

Sometimes veterinarians label small animals and other uncommon pets as “exotics.” If you are unsure if they treat guinea pigs, call and ask.

Since Silkies have an abundance of hair, keeping them cool during hotter months is crucial.

They need plenty of water and access to cool areas in their habitat.

Cool areas are areas where there are cooling pads, frozen water bottles, plenty of air circulation, or air conditioning.

A thick plastic water bottle is a great option for a quick, reusable ice pack. Remove any stickers or packaging on the bottle, fill with water leaving an inch of space at the top, freeze it and voila!

Place this homemade ice pack outside their cage to provide a cool space. It can also be placed inside the cage, but only with vigilant supervision.

A safe spot for a frozen water bottle is on top of guinea pig shelters, such as an igloo or wooden hideaway.

If placed on a wooden structure, place a paper towel between the water bottle and the surface of the wooden house to prevent water damage from condensation.

Special small animal cooling rocks can be found at your local pet store. These are great options, as they are safe and effective!

Like most other small pets, their lifespans are shorter than dogs or cats. The average lifespan of a guinea pig is 3-5 years, but they can live up to 8!

This may seem like a short amount of time when compared to the lifespan of a person, but it is one of the longer lifespans for smaller rodents.

Other rodents like mice and rats only life between 2-4 years. Guinea pigs and rabbits share similar lifespans.

Adoption as an Option

Finding a Silkie Guinea Pig can be tricky. They are relatively rare and cannot usually be found at pet stores.

Begin your search at your local humane society or similar adoption agencies.  Sometimes a Silkie pops up when you least expect them!

If you are unable to find any Silkies up for adoption at shelters, there are websites that people post local adoptions on.

After you have exhausted these options and are still desperate for a Silkie Guinea Pig, you can start looking up breeders.

Locating a breeder is simultaneously the hardest and most important part of the journey to get a Silkie.

Reach out to local guinea pig associations and ask recommendations on breeders.

Do thorough research online about the various breeders that specialize in the Silkie breed. Try to locate any certifications, licenses, and registrations on their websites.

Breeders with these specifications should advertise it on their website. If they do not, calling or emailing are your next options.

Reputable breeders should be open to discussing what qualifications they have and be comfortable answering your questions.

If they happen to be in your area, or you have the money to spend to travel, see if they will let you tour the facility. This way you can see the conditions for yourself.

Factors to Think About When Considering a Silkie

There are a few things to keep in mind before you make the final decision on your Silkie.

Is this guinea pig for you or for your child? Because of the high maintenance nature of a Silkie’s luscious coat, this breed should be a pet for adults only.

Before buying any pet, always consider the financial requirements as well. Can you afford to feed, house, and medically care for a Silkie?

Do you have the time to dedicate to a Silkie Guinea Pig? Managing your time is crucial to both the health and happiness of a Silkie.

Making sure you have enough time to play, interact, groom, clean, feed, and cuddle your Silkie is of the utmost importance!

An hour a day is the sweet spot. This allows maximum bonding to happen while you take care of the various needs of your piggy.

Are Silkie Guinea Pigs the Right Choice for Me?

If you have fallen in love with the beautiful Silkie Guinea Pig, you are not alone! Many people are proud parents of this long-haired breed.

After considering the amount of maintenance that goes into grooming a Silkie, you may feel that this breed is not a good fit for you. That is totally fine!

There are lots of other shorter haired breeds that require less grooming and may be a perfect match for you!

Do you love the Silkie Guinea Pig? Tell us all about your Silkie in the comments!