What do wild dogs eat and can we use their diets to improve our pet canines’ nutrition? Wild dogs eat an exclusively carnivorous, meat based diet, including large animals like elk all the way down to rodents and even insects. But our pet dogs’ ancestors also scavenged for human food scraps, including vegetables and fruit. As caring pet owners, we love to treat our dogs like members of the family. Besides pampering them with comfy beds, fancy toys, and even cute clothing, many dog owners feed their pups like family too. Whether we buy our dogs gourmet dog food and yummy treats or spend time preparing them a natural homemade diet, many of today’s pet dogs eat nothing but the best nutrition. Today we take a look at how far our pet dog’s food has come from the wild dog diet, and whether now is the time to start switching back to a more natural approach.

What do wild dogs eat? In this article we’ll look at the canine diet and how all kinds of dogs find food and eat in the wild. We’ll start with the ancestors of modern domestic dogs and the relatives of dogs like wolves and coyotes. We’ll also look at what other wild canines like the African wild dog and the Australian dingo eat. And let’s not forget about all the stray and street dogs that live near people in cities and towns all over the world. We’ll look at what they eat too.

What is a dog’s natural diet? This sounds like an easy question but there is some debate about whether dogs are carnivores, omnivores, or a combination of both. Carnivores are meat eaters while omnivores eat meat and other kinds of food like fruits and vegetables.

Domestic dogs, whether they are pets or strays, have become very well adapted to a diet that is closely associated with humans and their food. Our pet dogs like to snack on people food and research has found that stray and street dogs often do more scavenging than hunting.

Scientists believe that both humans and dogs have developed more flexible diets as both species have adapted to changes in our food over time, such as after the development of agriculture when we began to eat farmed plants and animals.

Our dogs’ wild relatives tend to be more carnivorous than omnivorous, but even meat-eating hunters like wolves can be what scientists call opportunistic carnivores, meaning that they will eat other foods depending on the circumstances.

What about our dogs’ wild ancestors? Let’s look at what the ancestors of modern dogs ate before, during, and shortly after they began to live with us and become the domesticated pets we know today.

What Did Our Dogs’ Ancestors Eat in the Wild?

DNA evidence shows that early dogs descended from one or more now-extinct species of Eurasian wolf sometime between 15,000 and 30,000 years ago. This timeline is broad because the domestication of dogs was a gradual, slow process that probably began when wolves started to follow our ancestors around and eat their scraps, like the discarded remains of animals we hunted and butchered.

It’s likely that wolves began to associate humans with food in different geographic areas and different time periods, with no single domestication “event.” When wolves began to scavenge our ancestors’ food, it was primarily wild game meat. At the earliest stages of the dog-human relationship, humans were hunters and gatherers. We didn’t start farming until around 10,000 years ago.

During the early domestication process, dogs continued to share our meat scraps and leftovers. Analysis of the bones of early dogs show that they ate reindeer, for example. Other common prey animals at the time included deer, antelope, and horses. As domestication progressed, dogs began to accompany us on hunts and help us with other tasks like pulling sleds and guarding. The earliest dog “breeds” were working dogs.

When we became farmers, we trained them to herd livestock. As agriculture expanded our diet to include domesticated animals and farm crops, our dogs’ diets expanded too. Experts believe they still mostly ate our scraps, but now they included grains and cereals in addition to meat. Dogs began to adapt to our omnivorous diet and their bodies became better at processing the kinds of foods that we eat, including starches like bread, porridge, and root vegetables.

What Do Wild Dogs Eat Today?

Domestic dogs belong to the canid family, which includes wolves, coyotes, foxes, and jackals. All the wild relatives of our dogs are classified as carnivores, but they can be opportunistic omnivores in some circumstances.

Canids in the wild can eat all sorts of things if food is scarce. For example, coyotes will eat fruit, flowers, insects, and lizards in addition to small game like rabbits and mice. Our dogs’ wild relatives prefer to eat meat. Even urban coyotes with access to human food would rather hunt small prey like rodents than scavenge through our garbage.

Genetically, our dogs’ closest relative is the wolf. The wolf is a carnivore that hunts large prey animals like deer, caribou, elk, and mountain goats and sheep. They will also eat smaller game like rabbits and beavers.

What Do African Wild Dogs Eat?

They might look like our dogs and have the word dog in their name, but they are only distantly related to domestic dogs. They are carnivores like the other canids and eat a variety of large and small game.

What Do Dingos Eat?

The Australian dingo is a wild dog that is descended from domestic dog ancestors that traveled with humans to Australia from Asia around 4,000 years ago. They are true wild dogs and can interbreed with domestic dogs. New Guinea has dingo-like wild dogs as well.

In the wild, dingoes prefer to hunt mammals such as kangaroos, wallabies, wombats, and rabbits. They will also eat smaller prey like insects, birds, reptiles, and rodents. They can eat plants and fruits when food is scarce.

What Do Stray Dogs Eat?

Free-roaming domestic dogs that have no owners live all over the world in a variety of environments. In urban areas they are often called street dogs and in rural areas they may be known as feral dogs. The term “pariah dog” generally refers to naturally evolved street dogs in India.

Some street dogs are abandoned pets while others have been born on the streets for generations. Stray dogs that live near humans are opportunistic omnivores that search for all kinds of food. Fruit, vegetables, bugs, roadkill, and food scraps from the garbage are all on the menu. Of course, they can also hunt and eat small animals, alone or in packs.
Wild dogs that live in rural areas tend to hunt more and scavenge less than urban street dogs. Like coyotes, they hunt a range of large and small animals (including farm animals), but they will also eat fruit and vegetables and scavenge as well.

What Do Wild Dogs Eat Compared With Pet Dogs’ Diets

As you can see, there’s a reason dogs are often called opportunistic omnivores! While meat is the preferred diet of dogs and their canid relatives, they can and do eat other kinds of food when the opportunity presents itself.

Domestic dogs, because of their long association with humans and their food, have developed the ability to eat a more varied diet than their wild relatives. A domestic dog in the wild can hunt prey animals as well as scavenge for other types of non-meat food, like its cousin the coyote.

The modern dog’s ancestors were smart and adaptable. They learned a long time ago that being near humans was a good way to find a reliable source of food. Today’s pet dogs have our love and protection as well as that steady food supply, sometimes too steady in the case of overweight dogs!

Your dog’s diet should mostly consist of quality animal protein, but you can certainly mix it up with some healthy non-meat treats like yogurt, peanut butter, carrots, blueberries, and sweet potato every now and then. 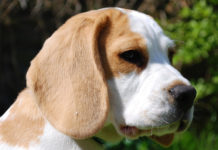