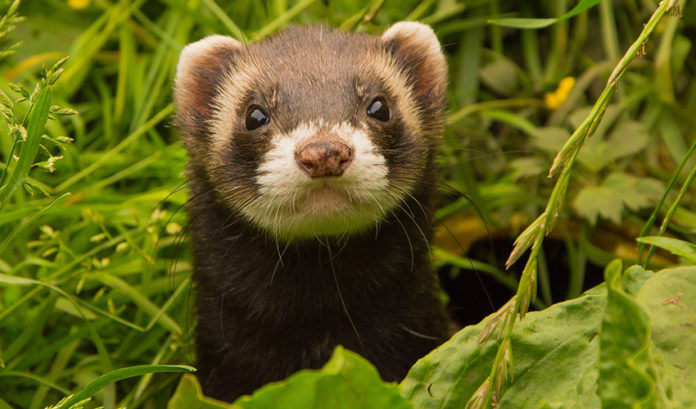 Where do ferrets come from? We investigate the fascinating history of ferrets and give you a window into the wild ferret’s past.

Have you ever wondered where ferrets came from?

These playful, curious, fearless hunters have only been popularized as pets in the last forty years or so, but they have lived and worked alongside humans for thousands of years.

This means that your ferret is descended from a long line of domestic ferrets, capable of performing many important jobs, with a history as rich and complex as those of domestic cats and dogs – and almost as long.

What is a ferret?

Ferrets are small, carnivorous mammals that typically weigh between one and four pounds at maturity. Male ferrets are larger than female ferrets, and ferret fur is sable, brown, black, white, or mixed in color.

Domestic ferrets are believed to be descended from either the Eastern European polecat or the steppe polecat, and could even be a hybrid of both. In fact, domestic ferrets can interbreed with both species to produce fertile offspring.

Domestic ferrets are not believed to be descended from black-footed ferrets, as these ferrets were native to the western United States, and the ferret was domesticated elsewhere.

So what makes ferrets different from polecats?

Scientists have several criteria for establishing if a species is officially domesticated or not. Some of those criteria are size, physical changes, coloration, and behavioral changes when compared to their wild relatives. 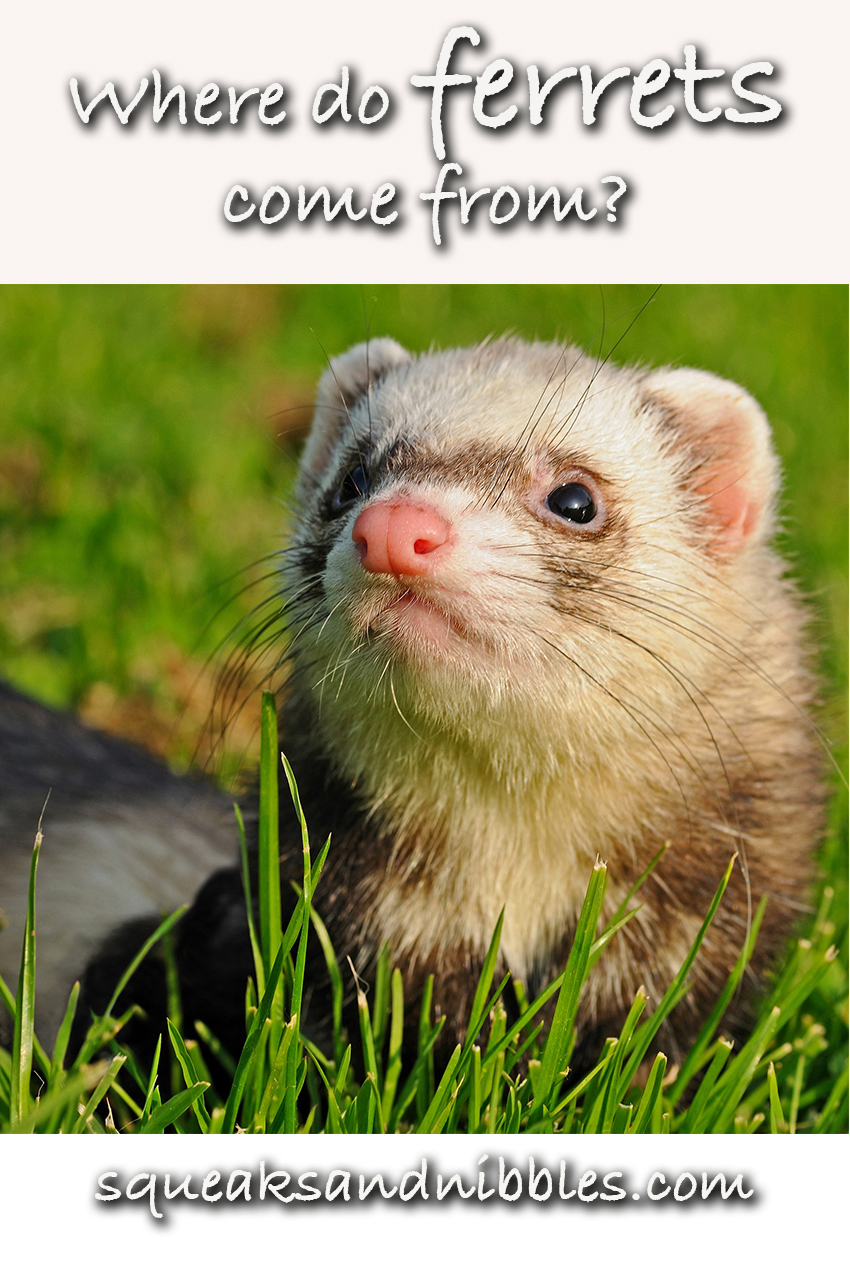 Polecats, like most wild animals, tend to be uniform in size. Ferrets, on the other hand, range widely in size, with females weighing as little as 1 pound and some males weighing up to 8 pounds.

Polecats are also fairly uniform in coloring, whereas ferrets can be sable, black, brown, albino, and many shades in between.

Ferrets have smaller eyes, shorter legs, and differently shaped skulls than polecats. They also have weaker eyesight and hearing, as they no longer depend on these senses for survival.

The most important change for today’s ferret fans are behavioral differences. Polecats are solitary, and ferrets are social, preferring the company of other ferrets and humans. Ferrets are playful, gregarious, friendly, and inquisitive, whereas polecats are wary, territorial, and temperamental.

Ferrets, like many mustelids, have scent glands that can be quite potent. The smell alone would often drive rabbits from their warrens in fear, but luckily for us, pet ferrets are typically de-scented.

All in all, the biological changes that make ferrets unique have made them perfectly suited as human companions.

Scientifically known as Mustela putorius furo, ferrets are members of the Mustelid order, along with weasels, badgers, otters, martens, mink, stoats, and wolverines. Ferrets are not a part of the Rodentia order, which means ferrets are not rodents.

Their Latin name is actually quite interesting. Mus is a derivative of the Latin word for mouse. Putorius comes from the word putor, which translates to “stench,” and furo is from the word furonem, which means thief. It is possible that word ferret comes from this word.

In plain English, ferrets are mouse-catching, smelly thieves, which any ferret lover can tell you is 100 percent true! 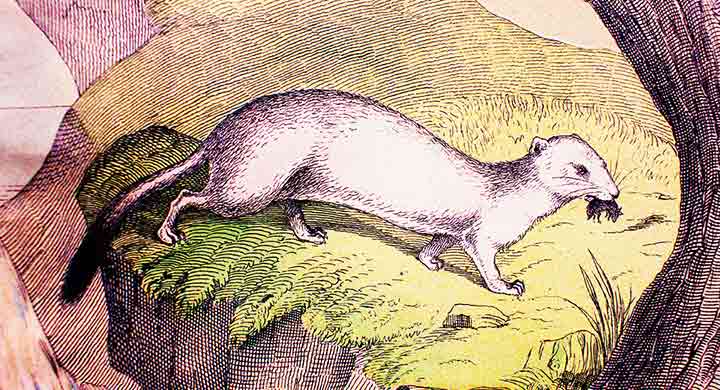 A short history of domestic ferrets

So when did these wild polecats become our partners and friends, and why did we domesticate them?

While the exact date and origin of domestication is unknown, it is estimated that ferrets were domesticated at least 2500 years ago. They are mentioned in classical Greek and Roman texts, and there are some who believe the Egyptians domesticated ferrets, although there is no concrete proof of this.

What we do know is that ferrets were present in the Mediterranean area and possibly elsewhere as early as 450 BC, and that they were used for their impressive hunting skills by both upper and lower classes.

Ferrets are ferocious carnivores, despite their small size, and prey on mice, rats, rabbits, and birds. This made them very appealing to humans as vermin control and, most importantly, as rabbit hunters.

Ferrets are quick and capable hunters that can easily dispatch larger animals like rabbits with their sharp teeth.

Unlike most dogs, ferrets can easily fit into rabbit holes. Ferret hunters muzzled their ferrets to prevent them from harming the rabbits and released them into the rabbit warren. This flushed the terrified rabbits from their holes, where humans waited with traps or dogs.

Paintings of ferrets and depictions of ferret hunting go back to ancient Greece and Rome, and some historians believe that they have been misrepresented as ermine in famous paintings.

Hunters in Medieval times preferred albino ferrets because the white was easy to see against the ground and made recapturing the ferret easier.

Ferrets are still used in Britain, Europe, and Australia to hunt rabbits, although it is illegal in the U.S.

Ferrets were also used to control mice and rat populations on ships. Unlike cats, ferrets could fit into the holes in the ship’s hold, which meant that smaller rodents had nowhere to hide.

In the U.S., ferrets were used as rodent control to protect barns, warehouses, and granaries. There are no established feral populations of ferrets in the U.S.

Modern rodenticides have made ferret hunting largely unnecessary in today’s world, but by this point in history ferrets have firmly weaseled their way into our hearts.

Along with hunting, ferrets have been raised for fur production, biomedical research, and as transporters.

Recently, the fur industry has declined, and most ferrets these days are either raised for pets or biomedical research.

Unfortunately for ferrets, they are one of the only animals known to catch human influenza. Scientists have used them to study influenza, which has influenced both our knowledge of the disease and of ferret health and anatomy.

It also means that you should be careful about handling your pet ferret if you have a cold!

A line is attached to the cable at one end, and the ferret’s harness or collar at the other.  The ferret then travels along the tunnel threading the line behind him, so that his handler can use it to drag the cable through later.

In rural parts of the UK ferrets are still quite commonly used for rabbit control, and often double up as both working animals, and pets for their owner’s children.  In the UK, hunting rabbits with ferrets is known as ‘ferreting and is a popular country pursuit. 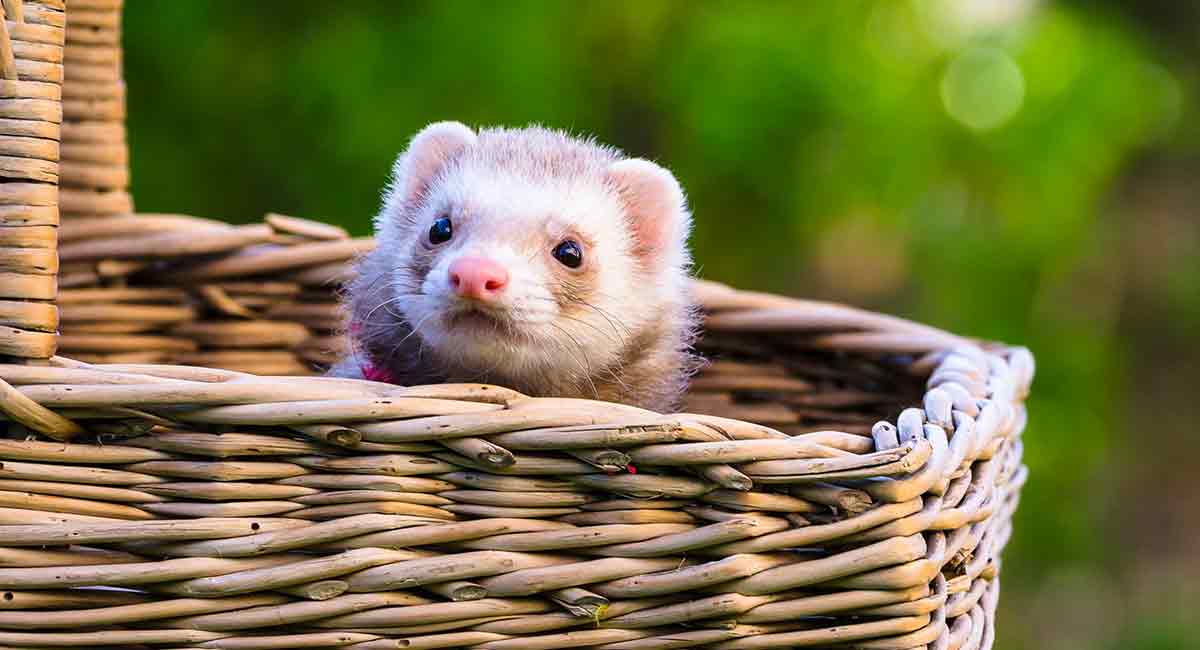 Where do ferrets live?

Rabbits, historically, have been a problematic domestic species. Rabbits have been introduced on almost every continent, and in many cases have had devastating effects on crops and ecology. The solution?

Today, domestic ferrets are found in homes around the world, but they are considered an ecological threat in some parts of the world. In New Zealand, where ferrets have no natural predators, ferrets interbred with polecats turned their teeth to other prey, such as flightless birds.

While there are no feral ferrets in the U.S., the black-footed ferret, a relative, is being reintroduced to the wild after near extinction, thanks to captive breeding programs.

What do wild ferrets eat?

Despite the prevalence of the ferret across the globe there are no genuine wild ferret. However, in rare cases, ferrets that have interbred with polecats can form feral populations, as is the case in New Zealand.

Ferrets are obligate carnivores, like cats, which means meat is their primary source of food. Feral ferrets thrive on rabbits, mice, rats, other small mammals, and birds.

Polecats and feral ferrets have very similar diets, and both thrive on small mammals and birds. Ferrets are not able to successfully digest plant matter, and require meat to survive.

The ferret’s diets is similar to those of cats, which is why many ferret owners feed their ferrets cat food.  Like cats, ferrets have also been responsible for the decline and extinction of bird species in places like New Zealand.

Today, ferrets are kept primarily as pets. Their playful, inquisitive, and adorable personalities make them popular with both children and adults around the world.

Pet ferrets in the U.S. are typically de-scented. This takes away the musky scent, making them simply “mouse-catching thieves,” instead of “mouse-catching, smelly thieves.”   In the UK, most ferrets are not de-scented and are kept in outdoor hutches.

Ferrets live about 8 years, on average, and they spend the majority of their lives asleep. Ferrets sleep 14-18 hours a day, which makes them the envy of many owners.

One of their most entertaining traits as pets is the “weasel war dance.” Far from a display of aggression, the war dance is a bouncing invitation to play that is often accompanied by a ferret noise known as “dooking.”

Today, ferret enthusiasts can compete in shows, where they are judged on color, confirmation, health, and demeanor, and ferrets also compete in fun events like ferret racing. 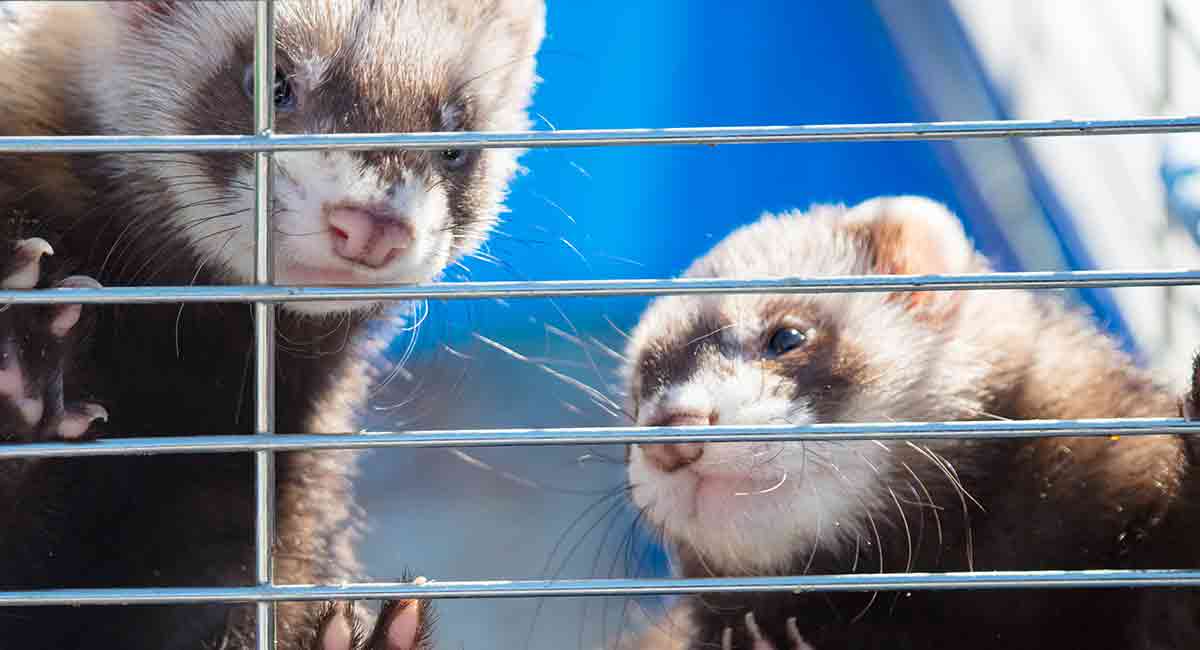 Are ferrets illegal in some places?

Ferrets are illegal in some parts of the world and in parts of the United States. It is illegal to keep ferrets in parts of Australia and New Zealand, and there are ferret restrictions in Brazil and parts of Japan.

In the U.S., ferret regulations have changed over the years, and ferrets are now legal in most states, except California, Hawaii, and Puerto Rico. Certain cities restrict ferret ownership, like Washington D.C. and New York City, and other states and cities require permits to own and breed ferrets.

No matter where you live, you should always look into regulations and restrictions before getting a new pet, and be sure to follow any necessary guidelines.

If you plan to travel out of the country with your pet ferret, you will also need to research any import restrictions or regulations at your destination.

Where do ferrets come from – a summary

Ferrets have been domesticated for thousands of years, and have worked alongside humans as hunters and occasionally companions throughout our history.

They are related to polecats, and are small, carnivorous mammals that, unlike their wild ancestors, live in social groups and thrive on interaction with humans and other ferrets.

Today ferrets are mostly sold as pets, but they are still occasionally used for hunting and in medical research.

You can find out more about ferrets from your veterinarian, or from local ferret organizations. 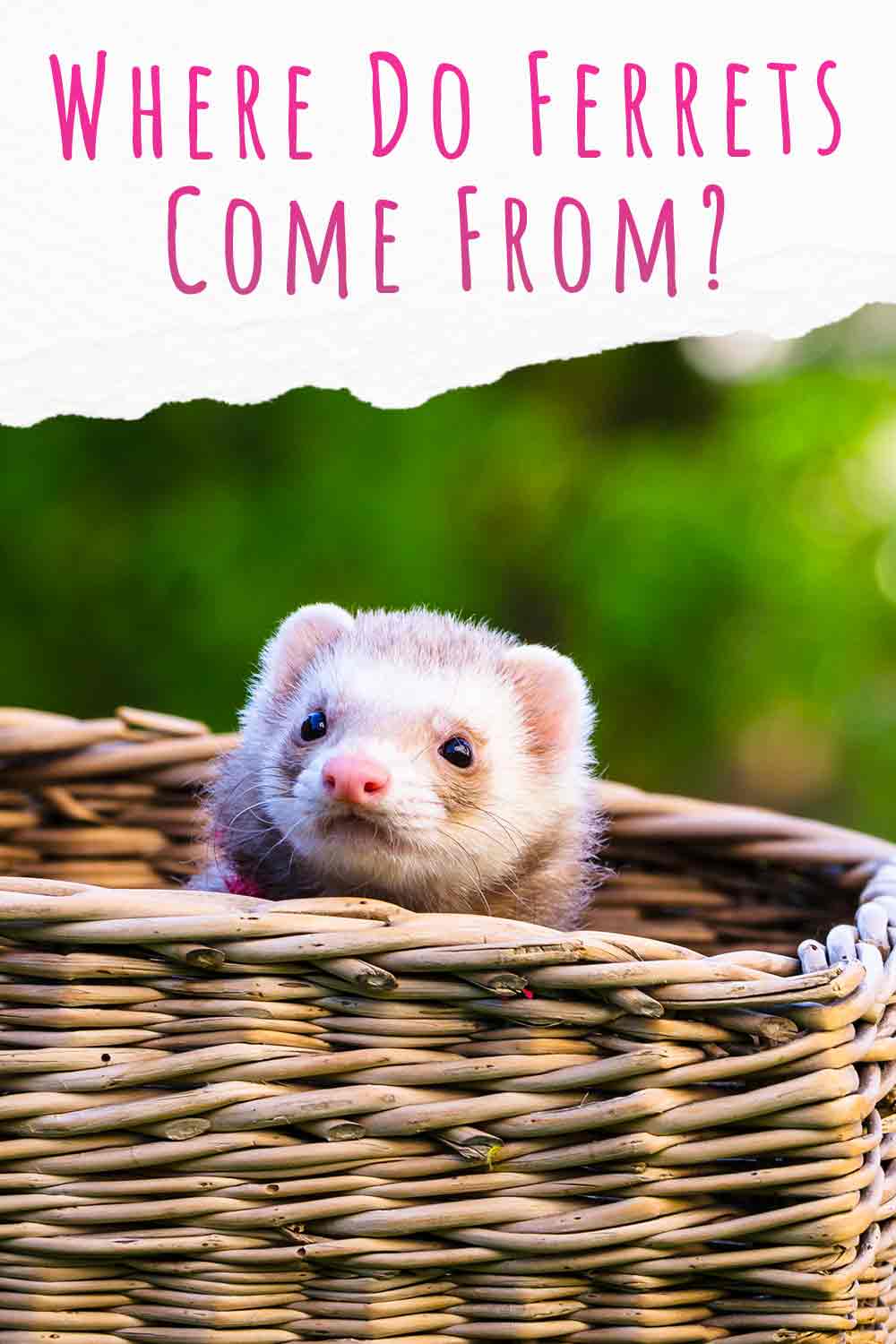