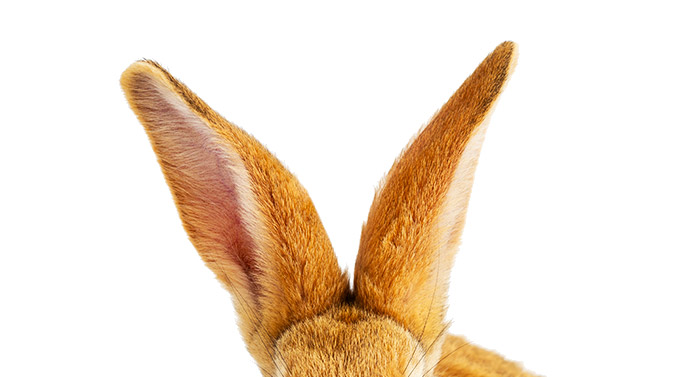 Why do rabbits keep turning their ears? Rabbits have an incredible sense of hearing, which would help them stay safe from predators in the wild.

Of course, most of our domestic rabbits don’t need to listen out for predators. But, this is a natural behavior that even domestic bunnies will do!

If your rabbit keeps turning their ears, it’s likely they are listening to their surroundings. In some cases, twitching ears can also be a sign of irritation and infection.

So, it’s important to look at the situation in which your rabbit keeps turning their ears.

Why Do Rabbits Keep Turning Their Ears?

There are a number of reasons that could explain why your rabbit keeps turning their ears.

Most commonly, rabbits will turn their ears as they listen to their surroundings.

They may do this if they’re feeling nervous about some perceived danger, or they may just be curious!

Sometimes, rabbits will also turn their ears when they’re excited. But, you’ll notice that this is paired with other excited behaviors like jumping and twisting.

The best way to learn why your rabbit is turning their ears so much is to observe the situation in which it is happening.

Are there any patterns? Does your rabbit only do it in a certain place, or are they doing it all the time? Are there any other behaviors that could help you piece together the explanation?

Learning why your rabbit is turning their ears is important, because it can rule out health issues such as infection.

Now, let’s get back to the reasons that rabbits might be turning their ears so much!

Listening to their Surroundings

The main reason that rabbits keep turning their ears when they’re with you is that this helps them to pinpoint distant sounds and keep track of their surroundings.

Most often, this is a way to stay aware of perceived threats.

So, if your rabbit turns his or her ears the most when you take them outside for some tasty grass, this is likely the reason.

You can help to keep your bunny safe from threats by staying near them, or keeping them in an enclosed pen with a mesh lid, so they can still access the grass, but can’t be snatched by a brave cat or bird.

Of course, rabbits aren’t always on the lookout for danger.

Bunny ear signals are a method of communication. And, our rabbits are expressive little animals!

So, turning their ears isn’t always a sign that they’re on the lookout for danger.

Sometimes, rabbits will turn their ears because they’re simply curious about what’s going on around them!

Bunnies are very curious little creatures. If they feel safe with you, they’re likely to be relaxed and calm when turning their ears.

Perhaps they’re just listening to the different sounds in your homes.

As we know, rabbits have a much larger hearing range than humans. So, if your rabbit is turning their ears lots, they may be listening to something that you just can’t hear!

Your rabbit’s other body language is a good way to learn if they’re feeling stressed or relaxed.

If they’re feeling safe but curious, their body will in turn be relaxed, and they may also be sniffing around your home.

On the other hand, if your rabbit is hearing something that sounds like a threat, they may feel quite nervous.

In this situation, their body will usually be stiff and tense.

They may also be unusually aggressive or difficult to handle. Some nervous rabbits will also show behaviors like excessive grooming and a lack of interest in food.

If your rabbit is moving their ears a lot because they feel nervous or scared, it’s a good idea to try and eliminate the perceived threat to help them feel more relaxed.

If you’re outside, perhaps take them in for a while and try going out again later when they feel safer.

Sometimes, rabbits will keep turning their ears as a way to express excitement about something.

This is usually pretty easy to distinguish from nervous or relaxed behaviors.

Your rabbit’s ears may be twitching rather than turning to pinpoint sounds.

Their ears will often be relaxed. Along with ear movements, excited rabbits love to run and jump around, binkying or trying to engage you in some play!

The final, and perhaps most serious reason that your rabbit keeps turning their ears is that they are suffering from an ear infection or irritation of some sort.

This is particularly common in lop eared rabbits – rabbit with floppy, rather than erect, ears.

Ear mites are a common issue in bunnies. Rabbits suffering from an ear mite infection may twitch their ears more than normal and scratch at their ears frequently.

If you suspect that your rabbit has ear mites, or another ear-related health issue, try to gently take a look.

Sometimes, rabbits with ear infections will object to you looking, or you may not know what signs to look for.

If in doubt, always take your rabbit to the vet as a first call. Your veterinarian will know exactly what to look for and the best way to treat it quickly and safely.

Why Do Rabbits Keep Turning Their Ears? A Summary

Rabbit ears are great tools for communication. Most often, when your rabbit is turning their ears a lot, they’re simply listening to something.

But, this could be a sign that they’re feeling unsafe or stressed. In the worst cases, excessive ear movement can be a sign of a parasite infection or health issue.

Does your rabbit love to twist and turn their ears when you’re spending time with them?