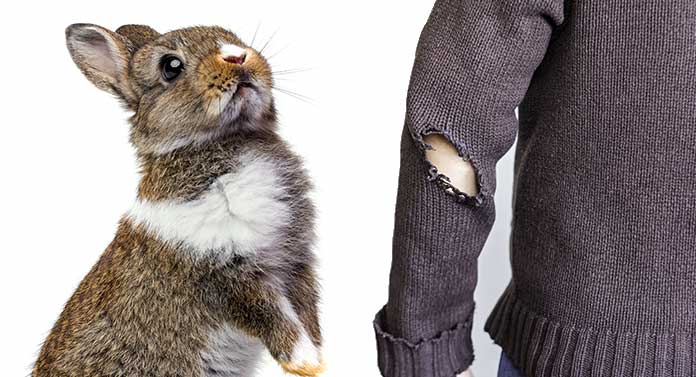 Why do rabbits scratch at my clothes?

Rabbits may dig at you or bunch your clothes because they’re bored, want some attention, are annoyed, frustrated, or perhaps they even need their nails clipped.

Understanding why your rabbit is scratching your clothes is the first step to stopping the behavior and making sure your bunny’s needs are being fulfilled.

Let’s take a closer look at why rabbits dig on you, or at your clothes.

Why Do Rabbits Scratch at my Clothes?

Learning about different rabbit behaviors is important for any bunny owner.

Some rabbits will only scratch at your clothes when you’re wearing something particularly fluffy, and others may seem to dig at you all the time!

Here are some reasons why rabbits scratch at you and your clothes:

Digging is a natural rabbit behavior that can be seen even in wild rabbits. But, as you can see, some reasons for domestic rabbits scratching at your clothes are more serious than others.

Before learning how to prevent this behavior, you need to pinpoint exactly why your rabbit is digging at you. So, we need to look at each common reason in a little more detail.

They Want Attention or to Play With You

Some rabbits may scratch at your clothes because they are bored! Are they getting enough entertainment in the day, or enough social interaction?

One owner questionnaire found that owners had a limited knowledge about rabbit social needs. Bunnies are very social creatures and are happiest when they have company.

If your rabbit lives alone, without a second bunny, you need to fulfil their social needs yourself.

Rabbits need plenty of attention, and they aren’t afraid to dig or scratch at you if it helps them get their way!

They’re Annoyed About Something

Digging is regarded as a potentially negative behavior by most rabbit owners.

So, it’s entirely possible that your rabbit is scratching your clothes or digging at you because they are frustrated by something you’re doing, or upset.

Perhaps you’re in their way, as they’re trying to explore the house, or you’re trying to give them attention when they want to be left alone.

Or, it could be something as small as they don’t like the way you smell today!

As we learnt earlier in the article, digging is a natural rabbit behavior. It’s seen in domestic and wild rabbits alike.

Burrows serve many purposes, one of which is safety from predators. So, if something is making your rabbit feel anxious or scared, they may be digging at you or your clothes to hide and relieve some of this fear.

Other signs of fear include biting, struggling, and kicking.

If you don’t handle your rabbit regularly, they may feel unsafe during the times you do handle them, which can lead to scratching at your clothes.

If there’s a chance your rabbit could be pregnant, or you know for certain that she is pregnant, this could explain why your rabbit scratches at your clothes.

Burrows and nests provide a safe place for them to give birth and look after their kittens. (That’s the name for baby rabbits!)

You might notice your pregnant rabbit digging at other things around your home, not just at you and your clothes.

There’s also a chance that your rabbit is scratching at you and your clothes to release some pent up energy.

Rabbits are energetic pets that need time and space to run about, hop, and play every day.

If your rabbit is digging at you as part of a burst of excitement, they may just be trying to release some pent up energy.

They might also start to run around your house, kick in the air, jump, and more.

They Aren’t Spayed or Neutered

If you haven’t spayed or neutered your rabbit, this could explain why they are scratching at you or digging at things around your house.

Neutering or spaying your rabbit reduces the need for a burrow.

You can speak to your vet if you want to learn more, and are considering spaying or neutering your bunny.

Their Nails are too Long

Another reason why your rabbit may scratch at your clothes is because their nails are too long. Ouch!

Rabbit nails, just like ours, will grow constantly. Digging can be a great way for rabbits to file down their nails naturally, stopping them from getting too long and uncomfortable.

If your rabbits nails are too long, you may need to trim them.

Rabbits love to organise things around them.

Have you heard of the behavior ‘rabbit bunching’? This happens when rabbits try to organise towels, pillows, clothing – whatever is at hand – until things are just right.

So, perhaps your rabbit is scratching at your clothes because you’re wearing a particularly soft and fluffy jumper that isn’t sitting quite right in their minds!

How to Stop a Rabbit Scratching at my Clothes

To prevent this behavior in your rabbit, it’s important that you learn exactly what the cause is. You’ll be able to stop the problem by treating its cause.

Digging and burrowing is a natural behavior for rabbits, that can be fulfilling, fun, and rewarding.

You may just want to redirect the behavior away from your clothes, rather than trying to eradicate it altogether. Give your rabbit plenty of hay or safe bedding to burrow in.

You may also want to give them a selection of old clothes or towels that they can arrange however they want in a little bunching box!

Don’t be afraid to get creative when finding ways to keep your rabbit entertained and fulfilled.

Rabbits can only communicate with us through their behaviors. So, it’s a good idea to learn as much as you can about your bunny and their actions.

Here are some other articles about rabbit behavior that you may find useful.

Why Do Rabbits Scratch at my Clothes? A Summary

As you can see, there are a large number of reasons why your rabbit is digging or scratching at your clothes.

You can choose to deal with the behavior at its cause, keeping your rabbit entertained, feeling safe, and well exercised!

Or, you can try to redirect the behavior away from you by giving your rabbit a dedicated place to dig.

Does your rabbit like to dig at your clothes? We would love to hear about your bunnies in the comments!