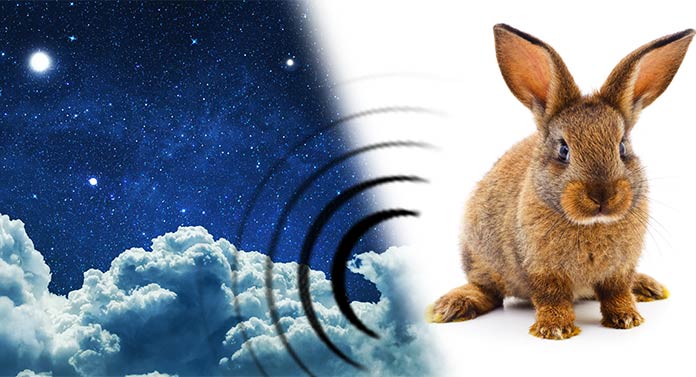 It isn’t always a serious issue, but it can be a sign that your bunny is unhappy or stressed.

You should go to your rabbit to remove the thing that’s upsetting them. But, remember that it can be rewarding to get some attention if your rabbit is just bored.

Why Do Rabbits Thump at Night?

Whether you’re a new rabbit owner, or an experienced owner who has never seen this behavior before, thumping at night can be stressful.

It can stop you from getting a full night’s sleep, and can be a sign that your rabbit is unhappy about something.

The three most common causes are:

Rabbits won’t necessarily sleep at the same times as us. They are unlikely to thump in their sleep.

It’s a good idea to find the cause of your rabbit’s thumping so you can help them, especially if they are thumping out of fear.

When Do Rabbits Sleep?

Most rabbits are seen as crepuscular. This means that rabbits are awake and active primarily during hours of twilight and dawn.

However, studies have shown that activity levels in rabbits can vary depending on location, the presence of predators, and even availability of food.

So, it’s entirely possible that pet rabbits will become more active in the day if that’s when you’re around to feed them.

Every rabbit is slightly different. So some rabbits may sleep a lot late at night, whilst you’re also asleep. But, others may wake for brief periods through those hours, or wake very early in the morning to start playing and eating.

Thumping is a method of communication for rabbits. So, it’s likely that your rabbit is awake if you’re hearing this noise.

Your rabbit is probably thumping in response to something, or as a way to get your attention.

Has something in your rabbit’s environment changed recently that could cause this thumping behavior?

Perhaps you’ve moved their hutch. Maybe you opened a window at night and the curtains are blowing in the breeze.

Or, maybe your rabbit is just hearing something that you aren’t. There’s a million things that could cause a fearful reaction in your rabbit.

Rabbits that are thumping out of fear will usually thump repeatedly until the thing scaring them has gone.

Other signs of fear include:

If you check on your rabbit when they thump at night and notice these signs, they are likely to be scared by something.

Thumping From Anger or Irritation

Another common cause of thumping in rabbits is because of anger or irritation. Again, this would be in reaction to something around them.

Do you keep multiple rabbits? Perhaps one of them is doing something that is frustrating the other!

Maybe something in their environment has moved out of reach, or they can’t find something they previously enjoyed interacting with.

If something has changed in their environment, switch it back and see if the behavior stops.

Rabbits thumping out of annoyance will usually not thump quite as much as if they are scared.

It’s also possible that your rabbit is thumping in the middle of the night because they’re bored and they know you’ll come running to check on you.

And, rabbits are clever little creatures. Once they’ve worked out a way to get your attention, they’ll carry on doing it whenever they want some love!

Encouraging this can make the problem more common. So, try to ensure your rabbit is feeling safe and happy without giving them too much active attention and play.

Otherwise, you might start hearing those late night thumps much more frequently, or whenever your rabbit is bored.

How to Stop a Rabbit Thumping at Night

Thumping at night can be annoying and a cause for concern.

If your rabbit is thumping at night, check that there isn’t anything wrong. If you’ve changed something about their living situation recently, you might want to try changing it back.

This may stop the behavior if this is what was scaring your bunny.

It’s always best to take a look to make sure your rabbit is in no immediate danger.

But, remember that some bunnies will thump at night because of boredom. If your rabbit stops thumping as soon as you come over, it’s entirely possible they’re doing this.

Why Do Rabbits Thump At Night?

So, there are three common reasons why rabbits thump at night. It’s usually not something you need to worry about, but is always worth checking to ensure your bunny is safe.

Has your rabbit started thumping at night? We’d love to hear what’s caused your bunny to start doing so! Let us know in the comments.