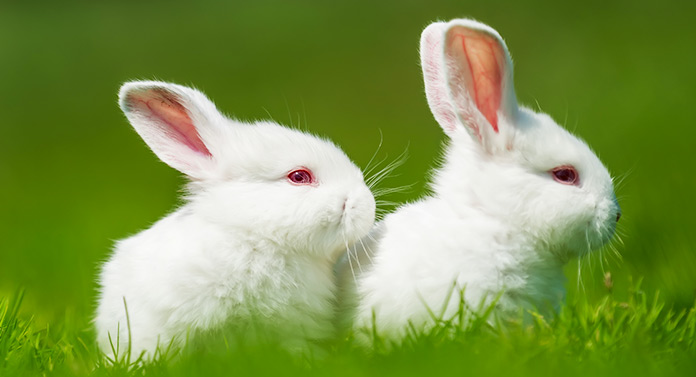 Why do white rabbits have red eyes? The most common cause of red eyes in rabbits is albinism.

Allbino rabbits have no pigment in any part of their body. The color red in their eyes is actually from the color of the blood vessels in their eyes.

Rabbits with red eyes can suffer from worse eyesight than other rabbits, and may be sensitive to light.

Let’s take a closer look at what causes red eyes in white rabbits, and how to care for these bunnies.

Why Do White Rabbits Have Red Eyes?

Most often, the cause of red eyes in white rabbits is albinism.

Many albino rabbits will look completely white, because they are unable to produce any pigment. But there is a form of temperature sensitive albinism that produces darker markings in some albino rabbits, like the Himalayan breed.

In fact, their irises have no pigment at all. The red color is actually the color of the blood vessels in their eyes.

If a non-albino rabbit appears to have red or pink eyes, or a red or pink color around their eyes, it’s possible they have an eye infection.

Do All Albino Rabbits Have Red Eyes?

It might surprise you, but not all albino rabbits have red eyes. Some can actually have blue eyes.

The color of their eyes will depend on what type of genetic albinism they have.

Blue eyed albino rabbits have a tiny bit of pigment in their eyes – just enough to affect the way light is refracted and make them appear blue instead of pink.

(A locus is a specific position in the genetic code, like an address for DNA!)

You can read more about this in our complete guide to albino rabbits. For now, let’s get back to those red eyes.

Can Non-Albino Rabbits Have Red Eyes?

It’s common for albino rabbits to have red eyes.

If your colored, non-albino rabbit has a red tint to its eye, or their eye suddenly becomes red or inflamed, they may be suffering from an eye infection.

You may also notice swelling, pus or crustiness around your rabbits eyes.

Take them to the vet if you’re concerned that they are developing an eye infection.

Do Rabbits With Red Eyes Have Good Eyesight?

Most albino animals, rabbits included, have worse eyesight than their non-albino cousins.

This is potentially one reason why albino animals are preferred for laboratory studies.

If you have a rabbit with red eyes, they will still be able to see you, but may have worse eyesight than a standard-colored rabbit.

On top of this, albino rabbits with red eyes are usually more sensitive to light than rabbits with darker eyes.

So, you may need to adjust your care routine to make sure that your rabbit is comfortable and happy in their house, getting enough food and water, and so on.

Let’s take a closer look at their specialized care needs.

Rabbits with red eyes usually have worse eyesight than those with darker eyes. They will also be more sensitive to light.

All owners will need to take care to look after their rabbits eyes. Make sure your rabbit isn’t playing with sticks or anything that could cause damage to their eyes.

Their hutch should also be free of anything that could damage their eyes. This is particularly important for red-eyed rabbits that have slightly worse eyesight than other bunnies.

And, watch out for any signs of infection or illness. Conjunctivitis is a common problem that affects rabbit eyes.

But, on top of this, you’ll need to make sure your red-eyed rabbit isn’t exposed to very bright lights.

This includes making sure they have somewhere to shelter away from the sun during the day.

The albino gene and the red eyes that accompany it have been selectively bred into a few rabbit breeds, so that they always have this trait.

But, albinism isn’t restricted to these breeds alone. As it’s a recessive genetic mutation, there’s a chance you might see it in any breed.

The three rabbit breeds that commonly have red eyes are the Himalayan, the Californian, and the Florida White.

Himalayan rabbits have completely white bodies, red eyes, and darker extremities. They have a temperature sensitive form of albinism that suppresses pigment production in parts of the body that reach above a certain temperature.

Californian rabbits often get confused with Himalayans. They have the same white bodies, pink eyes and darker extremities, but they are much larger bunnies.

Florida White bunnies have completely white fur and red eyes. These albino rabbits are usually bred for use in laboratories.

Why Do White Rabbits Have Red Eyes? A Summary

Red eyes in white rabbits are always linked to albinism. Although, not all albino rabbits will have red eyes.

Rabbits with red eyes need specialized care. They have worse eyesight than other rabbits and may struggle with light sensitivity.

If your rabbits eyes seem to have a red tint to them, or suddenly develop red coloring around their eyes, they may have an eye infection.

Have you got a white pet rabbit with red eyes?