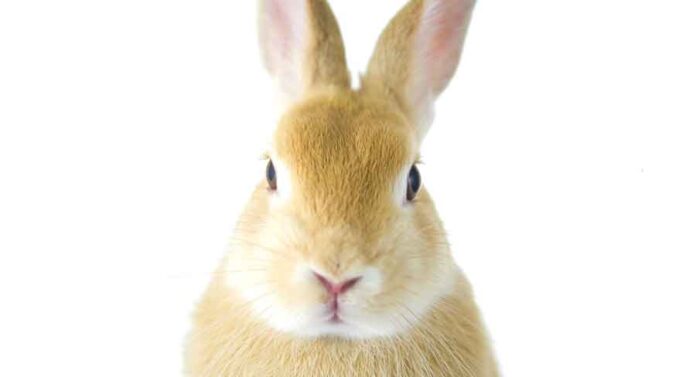 The way your rabbit looks at you can mean several different things depending on the other body language that accompanies it. In “Why Does My Rabbit Stare At Me” we’ll look at the different reasons for rabbits staring, and help you understand what your rabbit is feeling or expecting from you.

Why Does My Rabbit Stare at Me: Five Reasons

Rabbits are popular pets, both as house bunnies and when kept in hutches. But, since they can’t tell us what they’re feeling, we have to rely on the signs they give us through their body language. If your rabbit is staring at you, it can be a little off-putting. Especially when it goes on for a while! So what does it mean? Why does my rabbit stare at me so much?

Well, it could mean a variety of things. And, the best way to learn exactly what your rabbit is trying to communicate is to also look at their other body language. Here are some common reasons that your rabbit might be staring at you, or appearing to stare at you:

So, how are you meant to know which it is? Let’s investigate some other bunny body language that you might also observe whilst your rabbit stares at you.

Here’s a quick guide to some common rabbit body language behaviors your might observe whilst your rabbit is staring at you, and what they can mean.

Is My Rabbit Staring at Me or Sleeping?

It’s a surprise for many to learn that their rabbit might actually be sleeping rather than staring at them. Rabbits have a third eyelid, also known as a nictitating membrane. It will protect and lubricate their eyelid, and helps them get some sleep whilst staying alert to potential predators. Although your rabbit won’t actually be watching when they’re sleeping, they will be able to detect changes in the light around them, and their third eyelid helps them look like they’re awake to any potential predators.

Not all rabbits sleep this way. Some will happily close their eyes entirely. And, it doesn’t mean that your rabbit hates you if they sleep with only their third eyelid closed. Your bunny may just naturally be more cautious.

If your rabbit is sleeping, their body will be very still, their breathing will be deep and slow, their ears will be relaxed, and you might even hear them softly snoring! So, listen and look out for these hints if you think your rabbit might be asleep when it looks like they’re staring at you.

Does it Matter if My Rabbit Stares at Me?

Generally, it isn’t anything to be concerned about if your rabbit is staring at you, as long as they aren’t showing signs of being in pain or being very unhappy. If your rabbit is up on their hind legs, or stomping their feet, you should try and find out what they want. They might be hungry, or they might not be getting enough mental stimulation. So, grab them a snack, like some fresh hay or greens, and spend some time playing with them or petting them to see if this helps.

If it seems like there are no issues with your bunny, you shouldn’t worry about their staring! It could just be that your rabbit is showing you some affection, and feels relaxed around you. They might also simply be trying to understand something you’re doing.

Can My Rabbit See Something I Can’t?

Why does my rabbit stare at me and random things in the room? Can they see something I can’t? Rabbits are prey animals, so it’s natural for them to be on alert, particularly if something new appears, something potentially threatening. Rabbits are very sensitive to changes. And, it can be hard to predict what can make our bunnies feel on edge or nervous. For instance, even an open window with a curtain swaying in the breeze, or a very quiet sound can make our rabbits wary.

If something in your bunny’s immediate environment has changed, and suddenly they start staring at you a lot, the two may be linked. You may be able to change the new thing back, like closing the window, or removing an air freshener that’s giving off a new smell. But, at other times, this might not be possible. So, work with your bunny to make them feel safe and happy in their environment. Move at their pace, and make sure new things are accompanied with lots of treats and positivity!

Why Does My Rabbit Stare at Me? A Summary

So, there’s a lot that could be going through your bunny’s little mind if they’re staring at you! Sometimes, they might be trying to communicate something to you, but at other times, they could simply be relaxing! Sometimes, it can mean that something has caught your rabbit’s attention, or that they are staring at you because they want something, like some food. At other times, it can simply be because your rabbit feels safe around you, or even that they are sleeping! All rabbits are different, but by observing their other behaviors, you will be able to understand why your rabbit is staring at you.

Have you noticed your rabbit staring at you more recently? Let us know about your pet bunnies in the comments!