Leopard geckos are popular pets. These reptiles come in a huge range of colors and patterns, which differ depending on the morph you choose.

What is an Albino Leopard Gecko?

Albinism is the inability for a leopard gecko to create normal amounts of pigment. Albinism can look different in different animals. In mammals, albinism will often express as a lack of any color, so animals are completely white. In reptiles, albinism affects melanin, which is responsible for brown and black coloring. So, albino reptiles often have yellow and orange coloring. But, the specific appearance of an albino leopard gecko will depend on the morph that you choose.

Leopard geckos are small reptiles. They are also commonly known as spotted geckos, because their coloring usually expresses as dark spots over a lighter background. As adults, these geckos can range from around 6 to 11 inches in length.

They have four legs, scaled bodies, and a thick tail. As we’ve already mentioned, coloring on these reptiles can vary depending on the morph you choose. There are three main albino leopard gecko morphs. Let’s take a closer look at each of those, so you know what you can expect from each variety.

Tremper albinos were the first albino leopard gecko morph. They were discovered by a man named Ron Tremper in the 1990s. These albinos are the most common of the three available morphs. So, you’re likely to come across tremper leopard geckos in your search for an albino morph.

The appearance and specific coloring of tremper leopard geckos can vary. But, as a general rule, their scales will range from light brown, to yellow, to orange, to pink. They will have silver eyes with red veins.

The rainwater albino morph was discovered in the 1990s, after the tremper morph. This morph was founded by Tim Rainwater, after whom it was named. As albinos, they won’t be able to produce melanin. But, despite their inability to produce normal pigment, rainwater albinos are usually very colorful reptiles.

Bell albinos were discovered and named after Mark Bell. This morph is the most recent of the three in this guide.

They will have light pink eyes, which is the easiest way to distinguish them from the other morphs. Bell albinos will often have shades of lavender and yellow, with brown spots on their scales.

As a general rule, albino morphs need the same care as any other type of leopard gecko. Leopard geckos are popular, in part, because they’re easy to care for. But, this doesn’t mean they’re right for all homes. And, their care needs are still quite complex if you’re new to keeping reptiles.

Leopard geckos need plenty of space, particularly if you are housing multiple geckos together. Two male albinos shouldn’t be housed together, as they may fight. But, multiple females, or one male with females should be fine. Their enclosure needs to be well ventilated, so tanks designed for fish are usually not suitable.

Their enclosure needs a gecko-safe substrate, such as shredded kitchen paper. Read up on the pros and cons of your substrate choice, as some can be dangerous if ingested. These reptiles will love lying on ventral heat sources, like a heat mat under the tank. But, this should not take up more than half of the floor space, so they can cool off when they need to. Temperatures in the day should range between 79 and 86 degrees Fahrenheit. At night, it will be slightly lower, but should not drop below 68 degrees.

Albino morphs will have the same dietary needs as other leopard geckos. Leopard geckos are insectivorous. This means their diet consists entirely of insects! Some popular insects for leopard geckos include: mealworms, crickets, silkworms, and locusts. Many veterinarians will also recommend calcium and multivitamin supplements, which often come in powder form.

Albino leopard gecko morphs will shed their skin just like regular pigmented morphs. Young leopard geckos can shed as often as every 10 days. But, adults usually shed every 6 to 8 weeks. If your gecko is having trouble shedding some final bits of skin, usually around the toes and eyes, you can assist by soaking the skin and gently teasing it away with a damp cotton bud. Geckos will usually eat their old skin.

There is quite a lot of debate over whether albino leopard gecko morphs are more sensitive to light than other morphs. But, no matter what morph you have, most leopard geckos do not like extreme bright lights. They are crepuscular reptiles. This means they are most active at dawn and dusk, and tend to avoid direct sunlight. They do not bask in the sun, but instead use ventral heat sources, like rocks that have soaked up the sun.

Albino leopard geckos are potentially prone to the same health issues as other geckos. This includes:

Some albino leopard geckos may be blind, but not all albino morphs are guaranteed to be blind. If you’re bringing home a blind gecko, or your gecko develops sight problems, they will have different care needs to a regular sighted gecko. You may need to hand-feed their food, as they will struggle to hunt and catch live prey around their enclosure.

You should also keep things in the same place, even if you have to move it during spot cleaning sessions. Moving your blind gecko’s enclosure around a lot can lead to confusion and increased stress.

How Much Do Albino Leopard Geckos Cost?

Out of the three albino morphs we looked at earlier in this guide, bell leopard geckos tend to cost the most. Tremper albinos are usually the cheapest and easiest to find.

Albino leopard geckos aren’t necessarily rare. But, it will depend on the specific morph and coloration you’re looking for. Albino morphs can get purchased quite quickly because of their unusual coloring. And, as we said earlier, some morphs are more common than others. The tremper albino is the most common of the three albino morphs in this guide.

So, if you’re happy with any of the albino morphs, you’ll likely have no problem finding a reptile to bring home. But, if your heart is set on the bell or rainwater morphs, particularly one with striking coloring or an unusual pattern, your search might take a little longer.

Is An Albino Morph Right For Me?

Leopard geckos are interesting reptiles and can make great pets in the right home. Compared to some other reptiles, their care needs are relatively easy. But, they can still be a challenge for a novice reptile owner.

Albino leopard geckos need plenty of space and an enriching environment. They’ll shed just like regular leopard geckos, and will have the same insectivorous diet. If you think you’re able to care for a leopard gecko, but want something a little bit different, an albino morph could be the right choice for you! 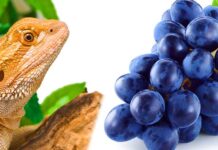 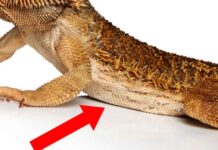 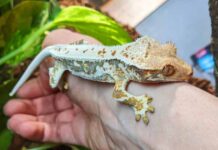 Do Crested Geckos Need UVB to Survive and Thrive?