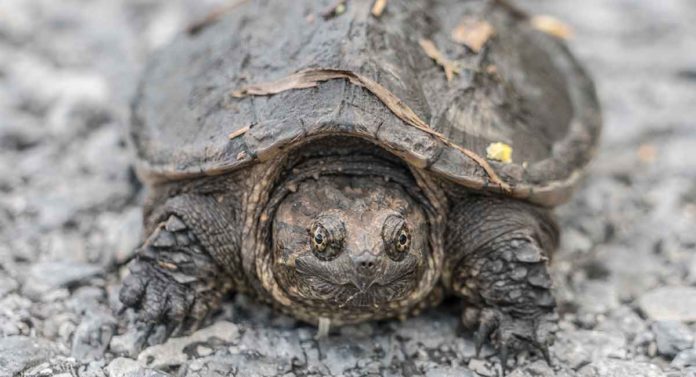 From tiny beginnings, these can go on to live for a century, and reach 80 pounds in weight!

Snapping turtles can be kept as pets. But to protect the wild population, it’s not as straightforward as simply bringing home a baby snapping turtle from the pet store.

Where Does The Baby Snapping Turtle Come From?

The common species comprises several sub-species which are wide-spread across North America from Nova Scotia, New Brunswick and Southern Quebec.

West, they reach all the way to southeastern Alberta, south through the Rocky Mountains and New Mexico, along the Gulf Coast and down to Southern Florida.

The alligator baby snapping turtles exist in a much more restricted zone within the common’s range in the south to southeast United States.

Despite their IUCN rating and the extensive range of the common snapping turtle, a recent study showed that their populations may be at very real risk due to lack of young individuals and extensive nest predation, even in protected areas.

One 2004 study from Texas indicates that the trade in turtle species is increasing and that snapping turtles are currently used as food, pets and for zoos and aquariums. Some of these are wild-caught, potentially impacting wild populations.

In 1948 a farmer in Indiana is reported to have seen a giant alligator snapping turtle. It was the size of a dining room table and estimated to weigh 500 pounds!

Numerous, sometimes life-threatening, attempts to catch the giant creature failed (including an attempt to drain the lake where it lived). So, the creature remained at large.

By some accounts these turtles can live over 100 years. Therefore, the creature may still be out there…

Snapping turtles are among the largest freshwater turtles in North America!

Let’s see how the two species compare in terms of appearance.

Adult common snappers typically weigh up to 85 pounds in captivity. Though in the wild they are most often around 30-40 pounds.

The carapaces are typically oval shaped, widest at the back, and grow to around 14-15 inches in length in adults.

Baby snapping turtle hatchling shells are almost round, may have lines along them and are just about 1-inch-long and 1-inch-wide with a tail of about 1-1.5 inches long.

Upper shell color can be tan, brown, olive or black. Whereas the under shell (plastron) is yellow or tan, except in hatchlings, where it is black.

Their skin is gray to black or yellow to tan and is usually without patterns. But it can have occasional white flecks.

Common snapper heads are large and cannot be retracted into their shells. They are pointed at the front and have a hook at the tip. Their eyes are high on the sides of their heads and can both be easily seen from directly above.

It can be tricky to tell the sexes apart as baby snapping turtles, but adult males tend to be larger than females. Also the cloacal (rear end) opening of the male is further from the base of the tail than in the female.

Alligator snapping turtles can be much larger than their common cousins, with shells over 30 inches in length and weighing in at around 250 pounds!

Their shells are much bumpier and more serrated than the common species. In addition, their eyes are positioned lower on the sides of their heads.

The plastron is gray-brown. In these types of baby snapping turtles and young turtles it may be mottled with white patches.

Their skin is dark brown to gray but may be lighter on their undersides. Babies look much like adults, but hatchlings have shells of around 1.5 inches long and 1.5 inches wide.

Males and females are easily distinguished by size in this species, with males being almost twice the size and weight of females!

Baby snapping turtles, as their name suggests, can be aggressive and bite. As adults their powerful jaws can cut through flesh and can even remove a finger or toe! The common species average bite force is 209 Newtons (over 45 pounds of force!).

Although typically sluggish, highly developed muscles allow them to strike rapidly with their heads, when so inclined.

Alligator baby snapping turtles are less proactive. But no less aggressive than the common variety. In the wild they prefer to lure their prey to them and then to snap their jaws shut when they are close enough.

Once closed though, their jaws can lock and are difficult to pry apart. Their average bite force is 158 Newtons (over 35 pounds of force). But there are stories of alligator snapping turtles snapping a boom handle in two, so you won’t want to take any risks!

Both males and females of both species like to travel. Female snapping turtles in the wild will migrate to a nesting site annually, sometimes moving an average of 6.5 miles, roundtrip. This makes them liable to become irritable or “antsy” once a year during their breeding season.

Their aggressive tendencies mean it’s best to keep these baby snapping turtles separate from other pets, even as babies. They may not like to be held by you either, so you’ll need to handle with care.

Though every animal is unique, this animal’s potential for aggression means it may make sense to admire them from afar.

Turtles are vulnerable to many diseases, many of which are related to nutritional deficiency and/or unclean living conditions. Here’s a list of some common ailments and some information on turtle care:

Eye infections/abscesses have been linked to vitamin A deficiency. If left untreated, these can take away a turtle’s sight and the bereft turtle may then stop eating and starve.

Lack of vitamin A can cause discoloration of the shell as well as lethargy/disinterest in eating.

Turtles can commonly get respiratory tract infections. Sometimes due to being too cold, or a lack of hygiene in their environment.

Symptoms can include wheezing, nasal discharge, sneezing, coughing and lack of appetite. Treatment can include antibiotics and vitamins.

Baby snapping turtles can carry the bacterium Salmonella without symptoms. But they can still pass it on to humans and make us very sick.

Handwashing is critical to prevent illness, which may be worst among the very young and very old. The FDA has some further recommendations regarding avoiding Salmonella from your pet turtle.

Baby snapping turtle care can be complicated. As they require plenty of clean water to swim in, places to hide and land to climb on to.

They must also have the temperature and light controlled for their optimal health.

They should also have a spot to “sun themselves” and bask, which should be near 90 degrees Fahrenheit.

Light should generally be on a 12-hour light/12-hour dark cycle and a quality UVB bulb is recommended to help them get adequate vitamin D, as well as metabolize adequate calcium.

Baby snapping turtles will require feeding twice a day until they are six months old. After this they can be fed once every other day.

While snapping turtles are omnivorous and will eat almost anything, it’s particularly important to make sure they get enough vitamin A, vitamin D, calcium and phosphorus in their diet.

Some sources say that alligator snapping turtles can live even longer (perhaps over 100).

Owning one is therefore a major life-time commitment and should be considered very carefully.

Age at maturity varies depending on where the turtles are from and their sub-species. Some females from Michigan taking 12 years to mature, while others in Florida are mature at age 4.

Shell size seems to be a better indicator of maturity than age.

Because of the risk of Salmonella exposure, we don’t recommend turtles at all to a family with children under the age of five.

There’s also the long-term care involved in making sure your baby snapping turtle grows up into a healthy adult.

Because snappers are a large species, they will eventually take up a lot of space and their care requirements can be complicated and time-consuming.

Add to that their life expectancy of up to 40 or more years, and you can see why bringing a baby snapping turtle into your family needs plenty of contemplation!

If you’ve got a deep love for snappers and the time, energy and experience to care for them, they can make for great pets. If not, look elsewhere.

Rescuing your next turtle is always preferable to acquiring them from the wild or an irresponsible breeder who does the same.

Check out this link for a list of places to rescue turtles in the US.

And this one for a similar list in Canada, the UK and other countries:

Snapping turtle eggs or babies must never be taken from the wild.

It is always best to get your snapping turtle from a shelter or reputable breeder who can prove they do not source animals from the wild.

In the United States it is illegal to sell a turtle with a carapace length of less than 4 inches.

This is to protect vulnerable wild baby snapping turtles from being snatched and illegally sold into the pet trade.

So, the youngest baby snapping turtle you will be able to bring home might not seem a baby age by human standards.

Very young turtles may be given as a gift, once you have built a relationship with a breeder.

You might also want to consider these other popular species of turtle, all native to North America:

If size is an issue, the Razor-backed musk, Mud and Box turtles are all small species whose shells won’t ever get larger than 5 or 6 inches!

Is A Baby Snapping Turtle Right For Me?

Baby snapping turtles are tiny! Just an inch or two in size. But they grow to be some of the largest freshwater turtles in North America and can be well over a foot or two by the time they stop growing.

Baby snapping turtles are also very aggressive and can do some real damage if they get their snapper on you or on one of your other pets. This means they’re probably not going to be the best pet to snuggle up with.

Snapping turtles are long lived and require some fairly complex care and living arrangements. This makes them a no-no for someone without the time and energy to meet their needs.

Their longevity also makes their wild populations’ viability difficult to estimate, and their nests remain extremely vulnerable to predation, making it essential that their babies are never removed from the wild.

The United States does not allow the sale of any turtles with carapaces under 4 inches, so very young baby snapping turtles have to be gifted by friends or the result of home breeding.

Baby snapping turtles won’t suit a family with young kids at all and should be carefully monitored around all kids. Wash their hands well after handling them to prevent the spread of Salmonella.

If you love everything about the different types of turtles out there, we’ve got plenty more reading for you.

Check out some of our other pet guides! 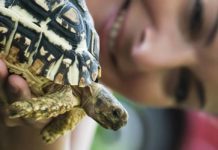 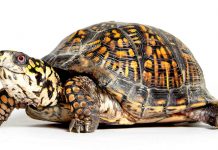 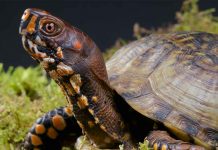