What animals eat corn in the wild, and who consumes it in pet food? You might be surprised that corn is a staple part of a lot of creatures’ diet. For many mammals, birds, insects and even reptiles, munching on corn is a pleasurable pastime. This giant wild grass plant contains lots of starch, carbohydrates and fiber. But although many animals like dogs and cats will eat corn, it doesn’t mean it’s actually healthy or the best choice for them. Even when it comes in a pre-packaged pet food! Today we’ll share which wild and companion animals eat corn, and whether or not it’s actually the right meal for them.

If it seems like an awful lot of animals enjoy eating corn, well, it’s because they do! There’s a reason why farmers keep scarecrows in their cornfields. Corn can be an irresistible treat for wildlife. Corn is also an important component in feed for farm animals. Many domestic pets eat corn too, as an ingredient in commercial food as well as straight off the cob.

Corn is a grass plant. A type of wild grass called teosinte that originally grew in the Americas is the ancestor of modern corn. Selective breeding has led to today’s corn being much larger than the corn that grew thousands of years ago.

What Animals Eat Corn In The Wild?

Many wild birds and mammals will eat corn. Common wild animals that eat corn include:

Corn also has many insect pests. Some of them even have the word corn in their names, like the corn leaf aphid, the corn earworm, and the European corn borer.

What Animals Eat Corn On The Ranch?

Corn is commonly used as feed for many kinds of farm animals. Horses can eat corn, although its high starch content could cause some digestive upset. If fed to horses, it should be just a small part of their total diet. Since corn is a grass, livestock can graze on the leaves and stalks of corn plants. They include:

However, corn kernels are not usually recommended as a main source of food for ruminants like cows, sheep, and goats because it can upset their specialized digestive systems.

You may have heard that cattle are often fed corn on farms and feedlots. This is done to increase their calorie intake and make them grow more quickly. But cows are grass–not grain–eaters by nature. Corn kernels are fine for other farm animals like pigs, chickens, and other fowl to eat as a part of their diet.

Many small mammals that are kept as pets are rodents like guinea pigs, chinchillas, gerbils, hamsters, mice, and rats. Rodents in the wild like to eat corn. While it’s generally safe to feed pet rodents some corn, most veterinary health experts recommend that you only feed them corn as an occasional treat because it is a carbohydrate and can cause your pet to become overweight.

A commercial pellet diet supplemented by some fresh fruits and vegetables is appropriate for most pet rodents. Be sure to talk to your vet about safe and nutritious food choices.

Rabbits are not rodents and should not be fed corn as it can upset their digestive systems. Commercial pellets, hay, and fresh leafy green vegetables are better choices for bunnies.
Most wild birds like to eat corn, and pet birds enjoy eating corn too. You can feed larger birds, like parrots, corn on the cob, as they appreciate the mental stimulation of manipulating it with their feet and beaks.

What Animals Eat Corn In The Reptile Kingdom

Some pet reptiles are carnivores, and their diets should consist of animal protein (like insects). Others are herbivores, and some are omnivores too.

Certain lizards, turtles, and tortoises fall into the herbivore/omnivore categories and can eat corn. Most reptile experts recommend that the bulk of their vegetable intake should be leafy greens, but some corn is safe for them to eat. The most common pet reptiles including bearded dragons, ball pythons and geckos should not eat corn however.

Corn is used as an ingredient in many commercial dog and cat foods. Sometimes it is referred to as an undesirable filler in pet food. While corn is not a necessary component of canine and feline diets, it does contain some key nutrients.

Dogs are omnivores, so they can eat corn and other plant foods along with meat. Veterinary nutritionists say that corn is generally well tolerated by dogs and that it contains vitamins, minerals, fiber, and essential fatty acids.

It’s fine for commercial dog food to contain some corn. You can also feed your dog some cooked kernels as an occasional treat. Avoid feeding your dog corn on the cob, as dogs may swallow pieces of the cob which can get stuck in the gastrointestinal tract.

Cats are carnivores, so corn is not something that they would normally eat. Commercial cat food can contain ground corn as source of carbohydrates.

Some cats may not like the taste of cooked corn, but for those that do, a few pieces of corn are fine for cats to eat as a treat. Some cats also like to eat popcorn. A better treat for cats is a high-quality animal protein, like a little plain cooked chicken or fish.

Lots of creatures will eat corn, but it doesn’t mean it’s the best choice for them. Even when it’s presented in a pre-packaged pet food.

Many animals like the taste of sweet kernels of corn just like us humans. Not all animals should eat it, but for those that do, it can be a treat, fed occasionally as part of a whole, well-balanced diet.

Learn More About What Animals Eat 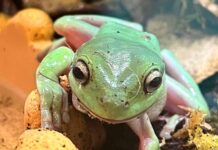