An albino milk snake will have no black pigment in their coloring. I love milk snakes and it’s not surprise that they are becoming an increasingly popular pet choice for reptile lovers. There are a huge range of milk snake varieties available. But one of the most popular albino options is the albino Nelson’s milk snake. The specific markings an albino snake has will vary, but on the whole milk snakes are popular, friendly candidates for new reptile owners. Today i’ll share what makes this orange and white snake so awesome, how to care for one and to decide if it’s the right pet snake for your family.

What is an Albino Milk Snake?

Milk snakes are a nonvenomous species that is becoming an increasingly popular choice for a domestic pet. They are a subspecies of the king snake, but there are around 25 recognised types of milk snake, all of which vary slightly in their color, temperament, and general appearance.

Albinism in snakes and reptiles expresses slightly different to some other animals. Albino snakes are unable to produce normal pigmentation. Rather than having the traditional milk snake coloring of red, yellow, white and black markings, they will often have no black coloring. The exact placement of any remaining coloring will vary. Black, yellow, and white markings can occur in rings or blotches.

The exact appearance of your albino milk snake will vary depending on the subspecies you have. Some varieties of milk snake will reach around 25 inches long when fully grown. But, others can grow considerably longer, to 50, or even as much as 70 inches long.

Color is another feature that will vary depending on the variety of milk snake you choose. Albinism is not restricted to any one subspecies – it is an inability to produce melanin and proper pigment that can affect any milk snake variety. So, the exact coloring and pattern you see on your albino milk snake will depend on how much the albinism affects them.

Albino milk snakes tend to have no black coloration. Instead, you will see white, yellow and red pigment. This could appear in rings around your milksnake’s body, or even in blotches. The specific pattern on their scales will vary.

Temperament is another trait that can vary depending on the specific milk snake variety you choose to bring home. But, in general, milk snakes are known for being calm, gentle, and easy going. Similar to the ever popular corn snake. This is one of the major reasons that they make such popular first-time pets.

Though milk snakes can be quite placid pets, they can become easily stressed and lash out if you do not handle them with proper care, or move at their pace. Most milk snakes will feel very stressed when coming to a new home. So, take your time when acclimatising them to being handled. Move at their pace, and they will feel much more comfortable with you as they grow.

No matter what color your milk snake, they will need plenty of space and a well-thought out enclosure. Milk snakes appreciate having lots of places to hide and shelter. They will also need a heating pad in part of their enclosure, and a cooler part to retreat to if they are too hot.

Milk snakes need constant access to fresh drinking water in a shallow bowl. In the wild, their diet will vary depending on the prey available in their region, but milk snakes are carnivores. In a domestic setting, they will enjoy a varied diet. They will eat small mammals, or even other small reptiles. But, prey size will usually vary depending on their own size and age.

Incorrect care, including diet and housing, can make it more likely that your milk snake will suffer from health issues. Some common health problems for domestic snakes include:

Keep a close eye on your albino milk snake to catch any unusual behavior or signs of injury. If you notice anything abnormal, it’s best to take your snake to the veterinarian to try and catch and treat illnesses as early as possible.

Albino snake varieties generally don’t have more complex needs than other types. But, this doesn’t mean that milk snake care is simple! They require very specific levels of heat and humidity in their enclosure, as well as a large variety of hiding places.

Milk snakes are generally regarded as a good option for a beginner. However, it’s important to note that they may not take to handling straight away. When acclimating your milk snake to handling, work slowly in short, gentle sessions. Move at your snake’s pace, and avoid any abrupt movements or loud noises.

Albino milk snakes will not suit every home. They are not necessarily the most affectionate and inquisitive pets. Some may be quite shy, and they will enjoy hiding and relaxing in their enclosure, rather than interacting with you to play games and bond. If you’re looking for a pet that will interact with you, there are plenty of other alternative options you can consider!

Where Can I Find an Albino Milk Snake?

It’s possible that you’ll be able to find a milk snake breeder near you, in person. In most cases, snake breeders will specialise in certain species, or even certain morphs. So, when looking for an albino milk snake, try searching for the specific subspecies you want. You may also want to broaden your search to include terms like king snake, since milk snakes are a subspecies of the king snake.

Whether you can find a breeder in person or have found one online, it’s important to choose a reputable breeder. Good breeders will provide the best care for their snakes, and will be knowledgeable about the different morphs available. They may also be able to give you good advice on your snake enclosure set up, and the best feeding routine.

How Much is an Albino Milk Snake?

The price of milk snakes varies depending on their coloring, demand, and more. But, on the whole, prices tend to average at around $300. You might want to look around for the best price possible, but remember to prioritise a good breeder over all else.

It’s also worth remembering that the upfront price of your milk snake is not all you must pay. You will need to make sure you have all the appropriate equipment for your milk snake’s care before bringing them home. This includes a large enclosure, and the correct items to fill it, like an appropriate substrate, hiding places, a water bowl, and a heating pad. The total of all of this equipment can add a few hundred extra dollars onto your bill.

Other Pets to Consider

Milk snakes are popular candidates for first time owners and more experienced owners alike. But, they aren’t right for everyone. If you’re still searching for your perfect new pet, check out some of the following guides, too!

Have You Got an Albino Milk Snake at Home?

Albino milk snakes can make interesting pets. Milk snakes in general are growing in popularity, and are praised for their chilled out temperaments. Several mutations of milk snake can have albino coloring. But, unlike some other albino animals, they still have a surprising amount of color on their scales. They’ll have no black pigment, but will still have orange, yellow, and white coloring.

Have you got an albino milk snake at home already? Or are you still looking for one to bring home? 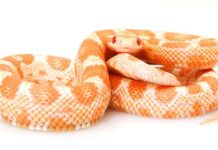 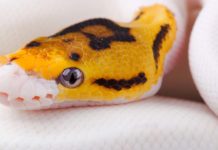 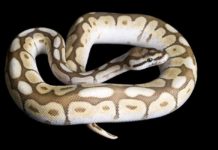 Spider Ball Python – What Should You Know About This Morph?