Can bearded dragons eat beetles as part of a healthy diet? Adult bearded dragons have a diet mostly made up of vegetable matter, but up to half of their diet can consist of insects. There are a huge range of beetles and beetle larvae available to purchase for our pets, but it’s important to ensure you’re only giving your bearded dragon safe beetles. And, that their overall diet is nutritionally balanced to avoid any diet-related health problems.

Today, we take a closer look at some different beetles that can be a safe snack for your bearded dragon.

About the Bearded Dragon Diet

Bearded dragons eat a wide variety of foods, both in captivity and in the wild. In the wild, bearded dragons are opportunistic predators. This means that their diets will vary depending on what’s available in their current location and in the current season. A bearded dragon in one part of the world could have a very different diet to one that lives elsewhere.

There are a huge number of beetle species in the world. And, plenty of those will make a safe snack for your bearded dragon. However, you should research the specific type of beetle you’re offering before letting one loose with your beardie. If a beetle is too large or hard, your bearded dragon may struggle to eat it. And, large beetles could bite or hurt your beardie, leading to stress rather than a full stomach!

In general, it’s recommended to stay away from hard adult beetles and to stick to smaller, softer insects. These will be easier for your bearded dragon to chew and to digest.

Bearded dragons may have different preferences. So, the beetle you choose to give them as a snack can vary depending on what your bearded dragon enjoys. And, many bearded dragons prefer immature beetles, still in their larvae form, since they’re softer and smaller. Both of these traits will make them easier to consume.

Beetles and larvae often have a high protein content. But, no matter whether you’re offering adult beetles or larvae, beetles shouldn’t be your bearded dragon’s only source of nutrition. Only feeding beetles can lead to health problems caused by nutritional imbalances. Let’s take a closer look at some common beetles that people want to offer their bearded dragons.

The name darkling beetle doesn’t actually refer to just one beetle. Instead, it’s the common name for the beetle family Tenebrionidae. This family of beetles contains over 20,000 species of beetle.

Mealworm beetles are a type of darkling beetle. These bugs, when fully grown, will have hard shells that range in color from dark brown to black. They’ll be between 12 to 18 mm long, with a width between 4 and 6 mm.

It’s more common for people to feed their bearded dragons mealworm beetles in their larva form – mealworms! These bugs have softer bodies, which are easier for beardies to break down. But, as we’ve already noted, they have a higher fat content. So, owners should account for this when choosing how many mealworms to offer and how frequently to provide this snack for their bearded dragon.

The same precautions apply to superworm beetles as other darkling beetles, but perhaps more so because of the larger size of this bug. In beetle form, superworm beetles can be hard for bearded dragons to ingest, thanks to their size and harder bodies. As larvae, they are softer and easier to eat, but are still a large snack, and are higher in fats than adults. They shouldn’t form a large part of your bearded dragon’s diet.

Like most beetles, the younger form of Japanese beetles, their larvae, will be easier to eat. They are not currently known to be toxic to bearded dragons, but eating too many of them can cause nutritional imbalances and lead to the associated health problems.

Can Bearded Dragons Eat Beetles from the Garden?

It can be tempting to simply take your bearded dragon into your yard and let them loose on the bugs on your plants. But, there are three major reasons not to do this. Firstly, there’s no guarantee that you will correctly identify the beetles you’re letting your bearded dragon eat. Some beetle species look very similar, so you’re risking letting your beetle eat an unknown type.

Secondly, even if you do correctly identify the beetles in your yard, there’s a chance that the beetles will be covered in traces of pesticides. Even if you don’t use these in your yard, bugs can carry them from other gardens they’ve been in. And, these chemicals can really harm our reptiles.

Finally, there’s no guarantee that your beetle won’t eat other bugs in the garden, which could harm them. Beetles and other insects can be hard to spot and easy to miss when you’re looking through plants. Not only could this put your bearded dragon at risk of eating something toxic, but it will make it impossible to calculate the nutrients your bearded dragon has consumed. This puts your beardie at a higher risk of nutritional imbalances which can lead to some serious health issues.

How Many Beetles Can Bearded Dragons Eat?

The number of beetles that are safe for your bearded dragon to eat will depend on your beardie’s size and weight, as well as the rest of their diet. It will also depend on the type of beetle you’re offering, its form (larva vs adult), and its nutritional content.

Smaller bearded dragons should eat fewer beetles than larger ones. And, beetles should not be a major source of nutrients in your bearded dragon’s diet. Bearded dragons thrive on a varied diet, getting the nutrients they need from lots of sources. The majority of their diet should come from plant matter. But, insects can make up the rest. And, even the insects you offer your beardie should vary.

On top of this, start by feeding one beetle at a time. Only offer another if your bearded dragon eats the first, and remove any uneaten beetles or larvae. Live bugs can bite at your bearded dragon if left uneaten in the tank. This will lead to stress and potential injuries.

Baby bearded dragons will fare better with softer insects, or immature beetle larvae. However, the same rules apply when it comes to balancing nutrients. This is especially important for baby bearded dragons, who still have a lot of growing to do.

Which Insects Are Not Safe for Bearded Dragons?

Beetles can pose problems for bearded dragons. They can be hard to chew and consume. But, they can make a good occasional snack in some instances, as can their larvae. But, some insects can pose a real threat to our bearded dragons’ health. So, make sure you research the specific insect you’re offering your beardie. Here are some insects known for being dangerous to bearded dragons:

Does your bearded dragon like any types of beetle? We’d love to hear about their favorites in the comments! 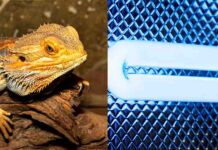 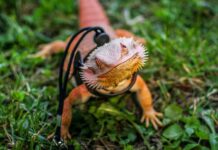 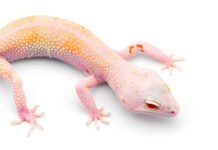