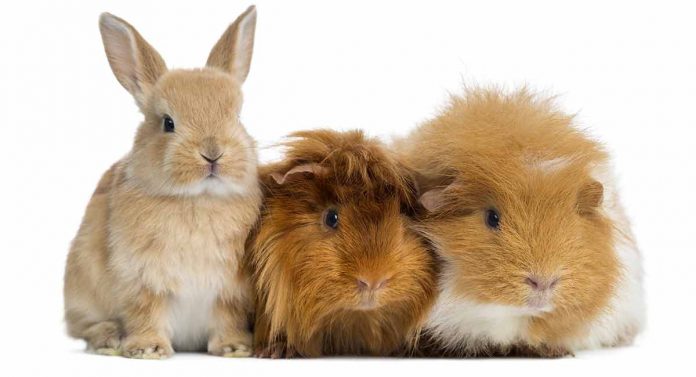 In this informative article, we’ll discuss the needs of both rabbits and guinea pigs and take a close look at their suitability as companions.

We’ll also try to answer many of the questions that are often asked by people who are wondering, “Can rabbits and guinea pigs live together?”

Are rabbits and guinea pigs the same?

No! Although they’re both undoubtedly cute and cuddly, rabbits and guinea pigs are definitely not the same species.

Both creatures can be kept in cages or in a hutch, and they both enjoy access to an outside run during good weather.

Although rabbits and guinea pigs have a similar diet, there are subtle differences in what they can and should eat.

In fact, sharing or swapping diets can be extremely bad for the health of both rabbits and guinea pigs.

Rabbits and guinea pigs can make good pets for children. They are both interesting and fun animals to look after.

Both species can be taught simple tricks too! And unlike a dog, they don’t need supervised exercise.

Can rabbits and guinea pigs live together?

The short answer to this question is “no.”

Rabbits and guinea pigs should never be caged together for a number of very important reasons.

That said, you can usually happily mix breeds within each species. However, do bear in mind that a very large breed of rabbit might be intimidating for a dwarf variety if they are kept together.

So, do rabbits and guinea pigs get along at all?

Unfortunately, although some people do like to keep guinea pigs and rabbits in the same outdoor enclosure, this is not an ideal situation for reasons we’ll look at in more detail later in this article.

Can rabbits and guinea pigs mate?

Rabbits and guinea pigs do not belong to the same species, and therefore they cannot mate.

Historically, before rabbits and guinea pigs were routinely neutered (de-sexed), they were often kept together to provide company for each other, without the risk of a population explosion!

Now that rabbits can be safely neutered by your vet, both sexes of each species can be kept together.

Likewise, guinea pigs can be de-sexed. So you can safely have a few neutered males living with females, without the risk of them mating and producing dozens of babies!

Generally, it’s better to keep female rabbits together, as they tend to be more placid and less aggressive towards each other than two males.

Lady guinea pigs also tend to get on better with one another than a group of males, whether de-sexed or not.

Can rabbits and guinea pigs play together?

It’s not a good idea to place rabbits and guinea pigs in the same enclosure, especially if the space is confined.

Rabbits have very powerful hind legs. They often jump and kick during boisterous play and could easily inflict serious injury on a guinea pig that wasn’t agile enough to get out of the way.

People have reported that their guinea pigs suffered from broken legs and other serious injuries, thanks to a clumsy bunny!

Also, buck rabbits can be rather amorous, and they’re not too fussy who they try to mate with! A hapless guinea pig could find itself on the wrong end of an over-friendly bunny’s attentions.

Although the guinea pig could not get pregnant, it could become stressed or even be injured if a larger rabbit tried to mount it.

Rabbits and guinea pigs communicate in totally different ways. Therefore, bunnies and piggies will not understand each other, potentially leading to confusion and fighting.

After all, just imagine how you would fare if you were placed in a home where no-one spoke your language and everything was different to what you were used to.

You’d get pretty stressed out very quickly, I should think!

One reason that rabbits and guinea pigs can’t live together is the difference in their diets.

Unlike rabbits, guinea pigs are not able to synthesize vitamin C, which must be provided for them in their diet.

Guinea pig pellets contain added vitamin C to address this need. Also, you can feed your piggies a small portion of fresh fruit or veggies each day.

Don’t overdo it though. Guinea pigs can be prone to diarrhea, which can be very serious as it causes dehydration.

Guinea pigs should not be fed rabbit pellets. These are formulated to meet the specific digestive needs of rabbits and don’t contain the extra vitamin C that guinea pigs need.

A rabbits intake of pellets should be limited, whereas guinea pigs can have unlimited access to their own variety of pellet food.

You can see from these observations on diet just how problematic it would be to have rabbits and guinea pigs living together!

Rabbits and guinea pigs should both have access to clean water and to a source of roughage, usually good-quality Timothy grass hay.

Continually munching on hay helps to wear down their teeth, which might otherwise become overgrown and sharp.

Rabbits should be fed high-fiber rabbit pellets in addition to a small portion of fresh green veggies and carrots each day.

Rabbits can make their own vitamin C. Feeding a rabbit guinea pig food can therefore lead to an overdose of vitamin C, which could be harmful to the bunny’s health. 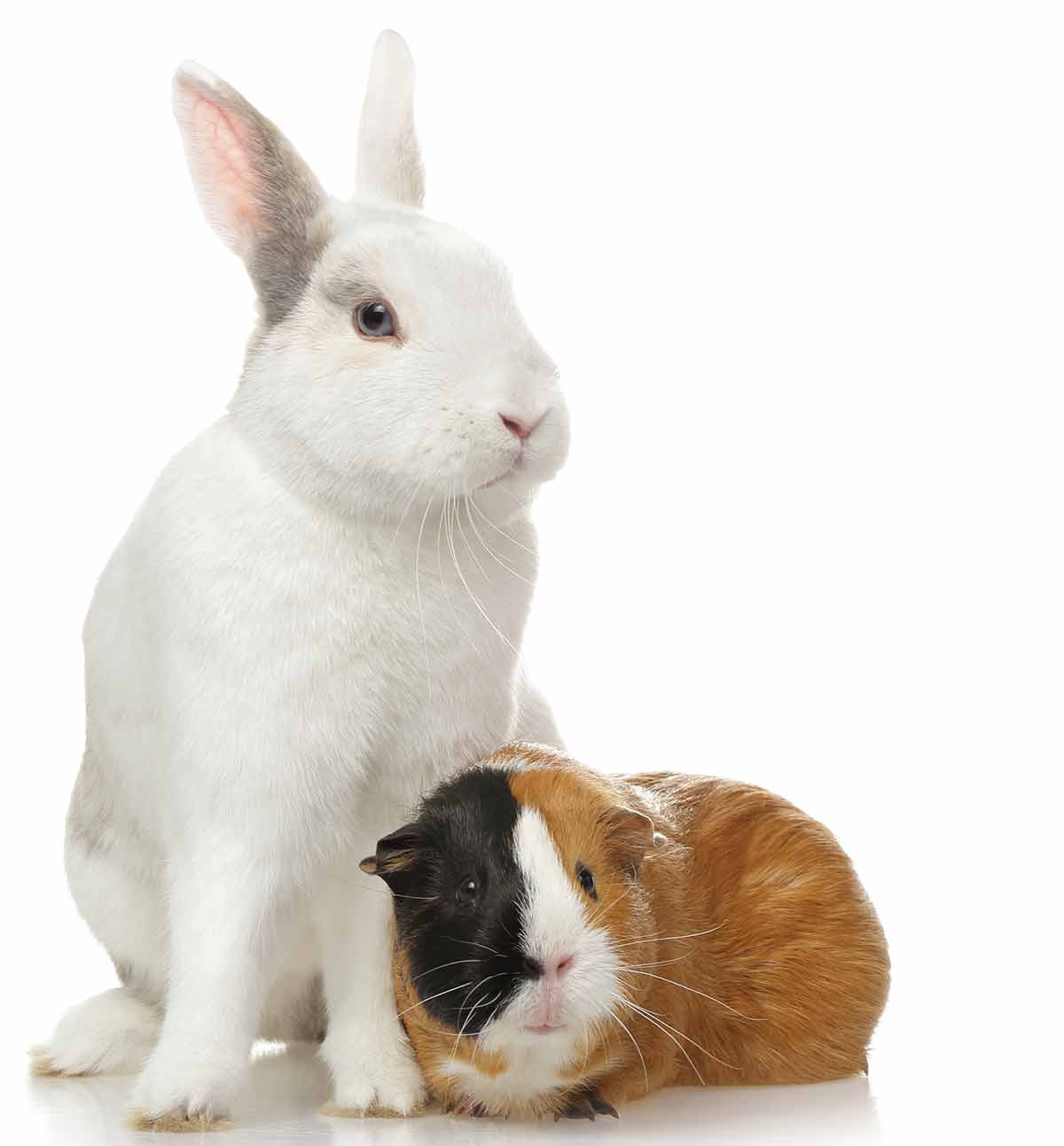 Health risks of keeping rabbits and guinea pigs together

Rabbits carry a bacteria, Bordetella bronchiseptica. This bacteria is a very common cause of respiratory disease in guinea pigs.

Rabbits are generally larger and heavier than guinea pigs. If a rabbit jumps onto a guinea pig’s back, this could damage or break it.

Rabbits have sharp claws too, which could inflict injury on a guinea pig if the rabbit decided to bully it.

Another common bacteria that is often carried by rabbits (and by dogs and cats) is Pasteurella. Although antibiotics can control this disease, it can remain living inside the rabbit’s respiratory tract, making the animal a “carrier.”

A rabbit can live a long and happy life without showing any ill effects from the bacteria in its lungs.

However, a guinea pig that is exposed to the Pasteurella bacteria is highly likely to succumb to the effects and die.

Guinea pigs are very vulnerable to respiratory diseases. Their immune systems are delicate and cannot fight off this pathogen.

You should always keep your guinea pigs well away from rabbits and other family pets for this reason.

The guinea pig and the rabbit living together – social misfits?

Guinea pigs and rabbits are both highly social and should never be kept in isolation. You would therefore think that a guinea pig and rabbit living together would be happy.

However, the two species’ social interaction is very different.

If you observe a pair of rabbits together, you’ll see that they love nothing more than snuggling up close and grooming each other.

Guinea pigs are very different in their behavior. They do not usually like to spend time grooming each other.

Also, guinea pigs are less sociable, spending much less time cuddling up together. They prefer to maintain their own personal space and are not very good at sharing.

You can see that keeping rabbits and guinea pigs together could result in conflict. A rabbit could become extremely lonely, while a guinea pig could end up feeling really hassled!

Remember that rabbits are happiest when cuddling up affectionately with a close friend and developing a bond through mutual grooming.

On the other hand, guinea pigs prefer to mingle with a herd of their own species, but spend much of their time alone, happily occupied with their own interests.

So, can rabbits and guinea pigs live together?

Well, you can see from what we’ve covered in this article that rabbits and guinea pigs should NOT be kept together in the same cage or even in the same enclosure.

Try to keep a rabbit with at least one other companion so that they can form an affectionate bond.

Remember that bucks (male bunnies) should always be neutered to prevent unwanted mating with females and to reduce aggression if they are to be kept with other male rabbits.

Guinea pigs should ideally be kept in small groups. Stick to keeping piggies of the same sex or have males de-sexed to prevent breeding and fighting.

We hope this article has answered all your questions about keeping rabbits and guinea pigs together.

There are lots of different breeds of rabbits and guinea pigs to choose from if you decide to keep one or the other species as pets. Why not check out the other fascinating and informative articles on our site to find out more?