Albino rabbits have white fur and red or blue eyes.

Several domestic bunny breeds carry the gene for albinism. Occasionally albino rabbits are born in the wild, but in most habitats it makes them easy pickings for predators.

In our homes albino rabbits can lead safe and happy lives, but their unique perception of the world and vulnerable eyesight does demand some special consideration.

What is an Albino Rabbit?

A completely albino rabbit is pure white, with no pigment in their fur or skin.

Depending on which genetic type of albinism they have, albino bunnies can have red eyes, or blue eyes.

Neither type is a breed in its own right though. Rather, they are both categories of color.

Even breeds that won’t be accepted into rabbit shows with an albino coat are sometimes found as pet bunnies sporting a snowy white coat.

But where does this crisp coloring come from?

Why Are Albino Rabbits White?

Albinism is caused by genes that stop the rabbit’s body making pigments.

All rabbit colors (other than white) are the result of two types of melanin. Eumelanin, which is black, and pheomelanin, which appears red or yellow.

When rabbits can’t make these melanins, they don’t have any color.

Red-eyed white rabbits (also known as ruby eyed whites) are albino rabbits who don’t even have any pigment in their eyes.

Their irises look pink because without pigment, all we can see is the color of the blood vessels in the eye.

But what about blue-eyed white rabbits?

Are All White Rabbits Albino?

Blue-eyed white rabbits also have a form of albinism.

They don’t produce any pigment in their skin or fur. But the suppression of melanin in their eyes is incomplete.

A little pigment is made in their irises – just enough to change the way light is refracted through them, and make them look blue instead of pink.

The difference is caused by different genes for albinism.

The Genetics Of Albino Bunnies

Red-eyed albinism is caused by genes at the C locus.

A locus is a specific place in a species’ genetic code where genes controlling a particular characteristic are located.

The C locus in rabbits is where the genes for density of pigment are positioned (the C stands for ‘concentration’).

There are five different known genes which rabbits can carry at their C locus.

C – This gene allows for normal, uninhibited pigment production. It is the most dominant of the color concentration genes, and masks the presence of any of the others below.

cch2 – Eliminates pheomelanin and reduces production of eumelanin too.

cch1 – This gene causes a form of temperature controlled albinism, which gives bunnies like the little fella at the top of this article shaded points. Pigment is only produced where the skin temperature is coolest.

c – Complete albinism. No melanins are produced anywhere in the body.

Blue-eyed albino rabbits don’t get their looks from the c gene.

Their white coat and blue eyes are controlled separately, by a gene at a different locus, called the vienna gene.

The vienna gene is slightly simpler to understand – it’s either there or it’s not, and it doesn’t have lots of alternatives which can take the same spot.

But like the c gene, it is recessive to genes for non-albinism.

Let’s see what that means next.

From a genetic point of view, rabbits with either type of albinism are unusual because they rely on rabbits inheriting two copies of the c gene or two copies of the vienna gene – one from each of their parents.

In the wild, albino rabbits are also unusual, because their coat makes them ultra visible to predators in most habitats.

So they’re less likely to survive long enough to reproduce and pass on their coloring to another generation.

However, almost all albino rabbits in the world today are bred and reared in captivity.

Pet rabbits don’t need to worry about predation, and they don’t often make their own breeding choices either.

Which means the availability of albino bunnies as pets has more to do with trends and changes in what people consider desirable.

High profile bunnies like the white rabbit in Alice in Wonderland fuel a steady interest in albino rabbits, so that they’re generally quite easy to find.

But do they make good pets?

At the time of writing, there is no evidence that rabbits’ temperament is intrinsically linked to the color of their fur.

More important factors include their breed, and how they are reared.

Some breeds are naturally more gregarious, or patient with children, more docile, or better problem solvers than others.

Rabbits which are handled regularly as youngsters and have lots of positive experiences with people are more likely to be trusting and confident around humans as adults.

However, melanin does play a role in the normal development of the irises, retinas, eye muscles and optic nerves.

Absence of melanin in albino rabbits can result in abnormal growth of these structures, which causes problems with focussing, depth perception and tracking.

Rabbits with poor vision are understandably more likely to be a skittish and nervous of being approached, compared to their full-sighted brethren.

They might also spend more time moving their head around to scan their surroundings and inspect objects.

In most respects, the health of albino rabbits is exactly the same as that of colored rabbits.

There is evidence that tyrosinase – an enzyme absent in albino animals, which prevents them making melanins – also has functions in the brain, nervous system, kidneys and liver.

But as of 2020, we’re not aware of albino rabbits being more at risk of diseases to these organs.

In normal circumstances, the differences in their eyes doesn’t cause any pain or discomfort either.

However, it does put them at greater risk of damage to their eyesight from UV rays.

So albino bunny parents should take extra care to protect their rabbit’s eyesight when they’re outdoors.

Rabbits love opportunities to hop about outdoors in a secure run.

All rabbits should have places where they can cool off in the shade when they’re doing this.

So consider placing their run under the canopy of a tree, or setting up a parasol to create some shade.

Likewise, no rabbit likes having hands suddenly reach down to them from above.

As a prey species, this is exactly the kind of experience which doesn’t end well for them in the wild.

But if your albino rabbit has compromised depth perception or difficulty focussing, they might be even more skittish about people approaching to pet them from overhead.

So, always make sure you enter their field of vision as early on as possible, by approaching them slowly and sideways on.

If they take a little longer than previous buns you’ve owned to relax in your company, just take it slow and keep the treats coming until they warm up.

Can Albino Rabbits Live Outside?

Yes, just like bunnies of other colors, albino rabbits can live indoors or out, provided your climate is suitable.

To protect their eyes, and also maintain their hutch at a comfortable temperature, don’t put their home somewhere which receives direct sunlight all day long.

And needless to say, make sure their enclosure it secure against predators, and always shut them inside at night.

Albino rabbits lack pigment in their skin, fur and eyes.

Several of our best loved rabbit breeds can have albino coats. Their coloring doesn’t typically affect their personality, but it can make their eyes more sensitive to sun damage.

It can also affect their quality of vision in a way which gives them distinctive mannerisms, or makes them more prone to skittishness.

Albino rabbits require a few extra measures to keep them safe and happy, but we think they’re well worth the effort!

Do you have an albino rabbit? What breed are they? Do you think their color has shaped their personality?

Creel, Inappropriate Use of Albino Animals as Models in Research, Pharmacology Biochemistry & Behavior, 1980. 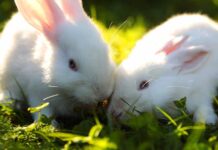 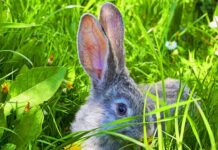 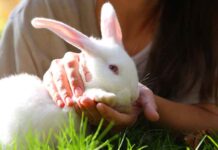