Horses are herbivores and hindgut ruminants. They rely on colonies of good gut bacteria to digest a high fiber, plant-based diet. But what do horses eat to maintain that healthy gut?

In the wild, horses graze on frequent small meals of grasses and other meadow plants. But this differs slightly from horses kept by humans.

Captive horses are usually fed a mixture of forages and concentrates, as well as being turned out to graze on pasture land.

Let’s take a closer look at what horses eat and what nutrients they need.

What Do Horses Eat?

In this article, we will cover:

But first, whether your interest in wild horses or captive horses is greater, the anatomy of their digestive system hasn’t changed since it adapted to a wild diet.

So that’s where we will begin.

What Do Wild Horses Eat?

Wild horses eat plants, which they graze on throughout the day. The exact composition of the diet depends upon where they live, and which plants grow there.

In short, wild horses eat grass, stuff that looks like grass, and stuff that grows next to grass.

But it’s hard to imagine such large animals getting all of the energy they need by grazing on small plants alone, so how do they manage it?

How Do Horses Digest What They Eat?

To get all the calories they need to survive, wild horses graze almost continuously, taking on several kilos of food over the course of lots of small meals per day.

Their digestive tract is equipped with a single-chambered stomach (unlike cows, which enjoy a similar diet but have four chambers in their stomach), a cecum, and a massive 100 feet of intestines!

The cecum is a chamber at the junction of the small and large intestines.

The cecum contains large colonies of good bacteria that help break down the cellulose in plant material, so that the energy and nutrients from it can be absorbed by the large intestine.

This digestive set up is great making the most of a plant based diet, but it has some weaknesses:

These drawbacks have important implications for feeding horses in captivity.

We’ll address these further on.

What Do Captive Horses Eat?

Just like small pets, people feed horses they own a wide variety of diets, based on availability, cost, personal preference of the keeper, and the needs and tastes of their horse.

People involved in feeding horses commonly describe it as more of an art than a science!

Common sources of forage for captive horses include:

Hays are grasses and plants cut near the end of the growing season and dried. Removing water means they keep without spoiling for a long time.

Silage and haylage are semi-dried, tightly-packed plants and grasses. They keep for a long time because packing them tightly in plastic excludes oxygen which bacteria need to grow.

The most commonly served concentrates are oats and commercial grain mixes, frequently supplemented with extra vitamins and minerals.

Some horse nutritionists believe that horses who aren’t working or competing don’t need concentrates if they are receiving a proper balance of good quality pasture and forage.

However, in 2015 a survey of over 6,500 horse owners found that 87% feed their horses concentrates, despite 70% also having access to fresh pasture.

Horses typically thrive on a diet which changes very little, since changes upset the bacterial balance in their digestive tract.

But there are some life stages and lifestyles which need a special diet.

Pregnant and nursing mares need more energy from their diet.

A nursing mare needs enough energy to produce a staggering 3-6 gallons of milk for her foal every day!

It’s more usual to give pregnant and nursing mares larger quantities of their usual forage to meet these energy demands, rather than high-energy supplements.

But lots of proud horse owners still follow a tradition of giving the new mom a bowl of warm, easy to digest porridge right after birth too, to help them recover.

What Do Baby Horses Eat?

Foals rely on nursing from their mom for most of their daily calories until they are 4-5 months old.

Don’t be shocked if you also spot a very young foal taking a nibble on their mom’s poop though! This is normal up until around two months old.

It’s thought that this is one way foals populate their own cecum with the good bacteria they need to break down large volumes of plant fiber in future.

Some owners need to supplement their foals’ regular milk diet with extra vitamins and minerals – this is known as ‘creep feeding’.

What Do Working And Competing Horses Eat?

Since the invention of cars and tractors, most horses are kept to ride for leisure.

But humans still employ horses for all kinds of activities including to herd livestock, race, and perform in dressage events.

Each of these activities demands a slightly different diet, tailored to deliver results such as steady energy release over a long period, rapidly available energy for intense bursts of activity, or good joint health.

Maintaining consistency is the simplest way to avoid digestive upset and the health problems in the next section.

But they are prone to problems with their teeth as they get older, which means they might need their meals softened in warm water first!

Diseases Linked To What Horses Eat

Just like us, eating too much of the wrong thing too often can make horses sick.

The most common equine health problems associated with diet are:

Horses who eat too much protein-rich concentrate or get too many sugary snacks are prone to weight gain and obesity.

Horse owners can use a weighing tape and body condition charts to assess their horse’s size, and make sure they’re healthy.

Colic is the name for a collection of symptoms rather than a specific problem. Broadly, it means “stomach ache”.

Colic can be caused by eating spoiled or soiled food, or too much food at once, because their food is served in two or three large daily meals rather than being available to graze on little by little.

It can also be caused by a sudden change in diet, even if the new food is appropriate for horses.

And it is a frequent result of worm infestations.

Mild colic may resolve itself, but severe colic can require medicine or even surgery to fix.

Laminitis is inflammation of the soft tissues inside a horse’s hooves.

It is linked to obesity and other inflammatory diseases, such as colic caused by overeating lush new plant growth in spring and summer.

Because the outside of the hoof is fixed and rigid, inflamed tissues inside it cause a great deal of pain, and can begin to push the bones of the foot down through the sole.

Around 7% of horse deaths are attributed to laminitis, because severe cases can only be resolved by euthanasia.

Equine Metabolic Syndrome (EMS) is usually a combination of obesity, insulin resistance and laminitis or predisposition to laminitis.

Some equine vets now believe that laminitis is a symptom of EMS rather than a disease in its own right. But others disagree on what the definition of EMS should be, which reduces its helpfulness as an alternative diagnosis.

Obesity is the main risk factor for developing EMS, and so it is closely linked to diet.

Horses like a fairly unchanging diet of small, complete meals.

Like many animals, every individual has their own preferences about different types of forage, and whether they like concentrates or not.

All captive animals benefit from being able to practise as many of their natural behaviors as possible, so horses enjoy being let out to pasture to eat fresh plants and grasses.

And most horses have a notoriously sweet tooth, so they love a treat.

Let’s look at safe treats, and which foods to avoid, next.

What Human Food Can Horses Eat?

Riders form strong bonds with their horses. Sharing a tasty treat to say hello, or reward them at the end of a long hack or trail ride, is a very human way of saying thanks and showing affection.

So what treats is a horse allowed to share with you?

Horses have a famously sweet tooth, and the old tradition of feeding horses sugar cubes or peppermints is fine, within reason.

Too many sugar cubes can cause stomach aches, and contribute to problems like obesity and laminitis though, so they’re best saved for special occasions!

Avoid round boiled sweets, since they can be a choking hazard.

Most carbs including bread, crackers and breakfast cereals are safe in small quantities as an occasional treat.

But the best snacks to share are slices of apples, carrot and watermelon.

These satisfy a horse’s sweet craving, without upsetting the delicate ecological balance in their gut.

What Foods Are Toxic To Horses?

Not all human foods can be offered to horses.

Horses are quite specialised herbivores – meat has no place in their digestive system, so don’t put it there.

Just like dogs, horses cannot metabolise theobromines – which means chocolate and caffeinated drinks are off the menu.

From an evolutionary point of view, horses have never needed to digest lactose, the protein in milk and dairy products. So don’t offer them now, because they’re a sure fire route to digestive upset.

What About Toxic Fruits and Veg?

Unpitted stone fruits can choke horses, so always remove the stones first, or avoid them altogether.

Cruciferous vegetables such as cauliflower, cabbage and broccoli cause horses to get uncomfortable (and very stinky!) gas.

And finally, it’s not a snack you’re likely to be tucking into yourself, but never offer a horse fresh grass clippings.

Since they’re already partly broken down, they ferment too quickly in horses’ intestines, and create a toxic environment for the good bacteria there.

What Do Horses Eat? A Summary

In the wild they get it by grazing almost continuously on grasses, sedges, legumes and flowering plants.

Concentrates are usually oat or mixed-grain pellets, fortified with vitamins and minerals.

Horses are as individual as people – some seem content whatever is offered to them, whilst others have picky tastes or need a carefully tailored balance of nutrients in order to thrive.

Horse owners should consult with an equine vet regularly, to make sure their horse’s diet still best serves their needs.

Do You Know A Horse With Unusual Tastes? 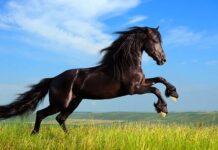 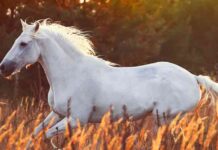 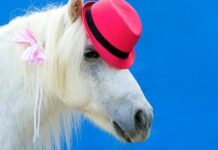