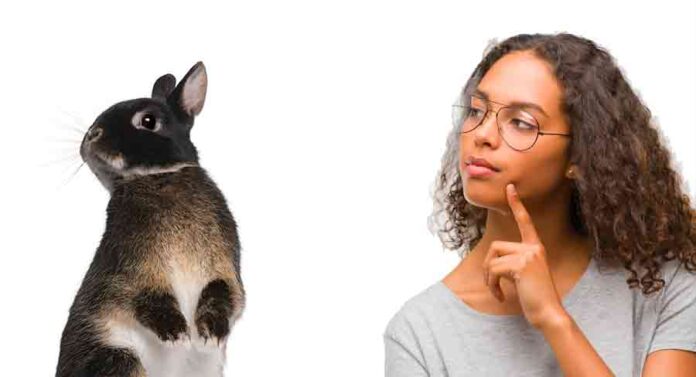 A bunny standing up on its hind legs is pretty cute! But what does this behavior mean? Some rabbits, particularly in the wild, will stand up to get a better view of their surroundings and safety. But, domestic bunnies might stand up in order to get a better look at what you’re doing, or even to get some tasty treats from you! In fact, many owners like to teach their bunnies to stand up on their hind legs as a fun trick. So, this behavior is often nothing to worry about.

Why is my Bunny Standing Up on its Hind Legs?

Standing up on their hind legs can be a taught behavior. But it is also something most rabbits will do naturally at some point in their lives. In fact, it’s also a behavior that is seen in wild and laboratory rabbits, not just those kept as domestic pets.

Rabbits might stand on their hind legs to get a better view of something – such as something you’re doing, or simply of their surroundings. Or, they might stand up in order to get something from you. For instance, if you normally give your rabbit a little treat when they stand up, or give them some attention because it’s so cute, they’ll repeat the behavior when they next want that from you!

Is My Bunny Scared When It Stands Up?

If this is a natural behavior for wild rabbits, does it mean your bunny is scared when it stands up on its hind legs to get a better look around? Rabbits are naturally prey animals. If you’ve owned your bunny for a while, you will have probably noticed that they keep a sharp eye on their surroundings, and can be easily spooked by changes in their environment.

But, even though standing on their hind legs can be a sign that your bunny is checking out the things around them, it doesn’t necessarily mean they are scared. They might just be feeling curious, or might be feeling on edge about something that has changed recently in their home. The environment they are in can also impact this behavior. One study found that laboratory rabbits in a flat, empty environment would rise up on their hind legs to get a better look around. So, if your rabbit has plenty of hiding spaces, they may feel less inclined to look around a lot, since they can run and hide if they need to.

Can I Teach My Rabbit to Stand Up on its Hind Legs?

Rabbits are very intelligent little pets. And, many owners are excited to learn that they can teach their bunnies tricks! One popular trick is to beg, which often involves standing on their hind legs, and even waving their little front paws in the air.

Teaching a rabbit a trick can be done in a very similar way to teaching a dog. You’ll need some tasty treats as a reward, so choose a healthy green veggie or small piece of fruit for your bunny during these training sessions. You can also mix up the treats, to ensure you aren’t offering too much of anything that is too sugary, etc.

At first, you may need to lure your bunny into the standing position. You can do this by holding the treat above them, so they have to stand up to reach it. Mark the correct behavior in some way, such as by saying “yes!” and give your bunny the treat. Start to pair the standing behavior with your cue (such as beg, or stand). Once you’ve been doing this for a while, try saying the cue first, and treat your rabbit when they stand on their hind legs in response to the cue!

Can Rabbits Walk on their Hind Legs?

Since our rabbits communicate through body language, it’s a great idea to familiarise yourself with different bunny signals. Here are some other guides that might help:

Bunny Standing Up – A Summary