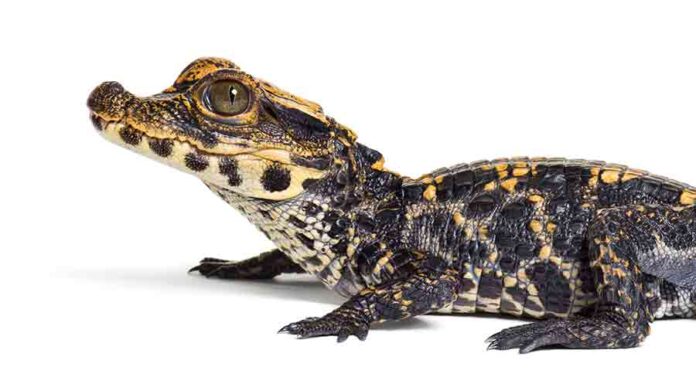 Our compendium of alligator names has hundreds of ideas for bestowing upon America’s second largest reptile. Whether you’re looking for cute, clever or scary, you’ll find all of them here.

Oh, and some awesome alligator facts for you along the way. So let’s begin, with our 50 all-time favorite alligator names.

50 Of The Best Alligator Names

Can You Get A Pet Alligator?

They’re not a species many people would think of keeping as a pet, but in fact there are indeed several thousand privately owned alligators in the United States. Laws and regulations about keeping pet alligators vary by region. Some states (such as New York) have a total ban on private alligator ownership. Some regions require a licence or permit, and others (such as Michigan) have no laws against keeping alligators at all. In fact, it’s estimated that somewhere in the region of 5,000 alligators are being kept as pets in Michigan!

However, just because you can do something, doesn’t mean you should. Alligators are incredibly difficult pets to keep in captivity. They need a specialized, high quality diet, in large quantities. They also need lots of space, and a large pond or pool to hang out in. Gators rely on buoyancy in water to support their body weight – without enough water to float in, they will literally be crushed by their own body weight. Alligators also need their habitat kept at a temperature between 82f and 92f. Which in most regions north of their usual habitat means installing a multitude of heat lamps.

Finally, captive isn’t the same as domesticated. Alligators aren’t suited to petting, or playing with, and can be extremely difficult to handle. An adult can reach 1,000lbs, and their bite can easily break the bones in a human’s arm. So, these giant reptiles are best left in the wild. And captive-bred alligators should be left to animal sanctuaries who are equipped with the facilities and expertise to look after them properly.

But that doesn’t have to stop kids (or adults) enjoying alligator plush toys, or introducing alligators characters into their games. So let’s look at some more cool alligator names, starting with some for the fairer sex.

And now some for the boys. And yes, I’ll be sticking with alliterative alligator names all starting with ‘Al’ for them too, but let’s not have an alarming altercation about it…

Ok, we can leave the alliteration behind now. What about some baby alligator names next?

Baby alligator names can celebrate how small they are, or predict how big they will get. American alligator hatchlings are small enough to fit in the palm of your hand, but can grow to over 12 feet long. Here are ten names for each end of the scale:

Kids especially like to name things after characters they already know. If that might work for the alligator you’re naming, this next category will help.

This list contains some alligator cartoon character names, plus the names of well-known gators from books and comics. There may be one or two famous crocodiles in there too…

Next, some names that pay tribute to just how long alligators have roamed the Earth.

What About A Dinosaur Alligator Name?

Alligators are modern day, living dinosaurs! The common alligator has been around for at least 53 million years, which means they once existed alongside Tyrannosaurus Rex, Velociraptors, and Brachiosauruses. It’s thought that alligators survived the asteroid which wiped out the dinosaurs because their body shape was better adapted to the dramatic change in environmental conditions.

Would you like to make your alligator sound as fierce as possible? Then this next list is the one for you!

Or is your gator funny, not frightening? Our last list celebrates the lighter side of choosing alligator names.

Alligator names don’t have to be sensible. After all, they’re unlikely to be aware of even having one, and even if they are, they won’t know what it means. So these names are a way to inject a bit of humor into alligator naming.

There’s lots to know about alligators. Here are some fast facts to impress your friends with:

What is the scientific name for an alligator?

The scientific name for the common alligator or American alligator is Alligator mississippiensis. Common alligators are found all over the southeastern United States and some regions of Mexico, living in freshwater wetlands such as marshes and swamps. But they’re not the only type of alligator. The Chinese Alligator (Alligator sinensis) lives in eastern China, where it is also known as the muddy dragon!

Did you know? There used to be six other alligator species prowling America, but they all went extinct over 5 million years ago.

The easiest way to tell the difference between an alligator and a crocodile is by looking at their snouts. Alligators’ snouts are shorter and more powerful with a blunt end – ideal for crushing prey with hard shells. Crocodiles’ snouts are long and tapered – they consume a wide variety of prey depending on their species, and what they lack in bite force they make up for in sheer aggression.

What is the name for a small alligator?

Caimans are a family of six species living in Mexico and South America, which look a lot like small alligators.

What is a baby alligator called?

What is a group of alligators called?

Large adult alligator bulls tend to be solitary animals. They are territorial, and fight off trespassers aggressively. Smaller males and females are more likely to live in groups with similar-sized individuals.

Have You Chosen An Alligator Name?

Which did you pick? Let us know in the comments box down below!

Before you leave, you might also enjoy these other articles, elsewhere on our site: