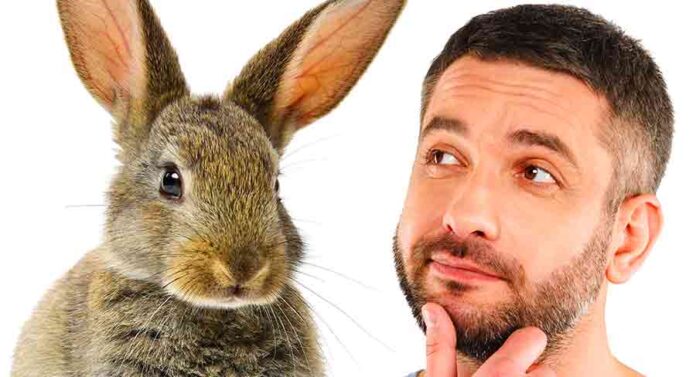 Can you keep a wild rabbit as a pet, or is taking bunnies from the wild unwise? In this article, we explore all the pros and cons of keeping wild bunnies as pets.

There are several species of wild rabbit, hare and jackrabbit native to North America. By far the most abundant and easily recognizable is the eastern cottontail rabbit (Sylvilagus floridanus), which has a brown coat, a fluffy white tail, and grows to 14 – 19 inches long. However, neither the eastern cottontail nor any of America’s other indigenous rabbits belong to the same species as the domestic rabbits we keep as pets. Pet rabbits (Oryctolagus cuniculus domesticus) are descendants of wild European rabbits.

Domestication of European rabbits started in France around 1,400 years ago, and selective breeding over hundreds of thousands of generations since then means that pet rabbits today have become a genetically distinct subgroup of the European rabbit species. As well as acquiring genes which have changed their appearance, modern pet rabbits have also been genetically hardwired to be tamer, easier to handle, and more receptive to human contact than their wild ancestors. So, the rabbits you’ve seen in the wild are not a direct substitute for a pet rabbit, in more ways than one!

Can Wild Bunnies Be Pets?

Not really, no. There are several practical barriers to keeping wild rabbits as pets:

Can You Tame A Wild Rabbit?

Researchers from Harvard, MIT and universities in Portugal and Sweden have collaborated to investigate how pet rabbits have changed genetically from their wild ancestors since domestication began. They found that pet rabbits are more likely to have genes which affect brain development and make them tolerant of being kept in captivity and handled. Wild rabbits, on the other hand, are hardwired to find these experiences extremely stressful. And no amount of kindness can overcome that.

For example, wild rabbits never expect to leave the ground. Picking them up is terrifying for them. They also perceive anything bigger than them as a potential predator, and will either freeze on the spot, or attempt to run away. Regardless of how many times you don’t try to kill and eat a captive wild rabbit, they will still perceive your next arrival as a potentially lethal threat. Since they won’t be able to escape, your presence will always be extremely stressful for them. And existing in a near-permanent state of stress isn’t just mentally miserable for wild rabbits kept as pets. It can have potentially fatal physical effects too, such as triggering a heart attack, or gastric stasis.

I’ve Found An Abandoned Baby Cottontail Rabbit – Can I Keep It?

Unfortunately, it is no more possible to tame a baby wild rabbit, than an adult one. Their wild instincts are programmed into them at such a fundamental level, that they will never really be comfortable living with people. Also, regional laws against keeping wild animals as pets apply as much to baby animals as adult ones.

So what should you do if you find a baby eastern cottontail rabbit on its own?

How To Catch A Bunny

If you need to trap a wild rabbit, the safest way is to use a humane trap. These are available online, or a professional wildlife rehabilitator may leave one in your yard and ask you to call when it has a rabbit inside it. Remember, there’s no point in working out how to catch a wild rabbit until you have a plan for what will happen to it next!

You might be able to trap an injured rabbit by sliding it into a sturdy box. Don’t try to pick one up with your hands. Besides the likelihood of being bitten and kicked, the stress of being lifted can be enough to kill a rabbit that’s already injured. Once the rabbit is in the box, keep the box on the ground if possible, and cover it with a blanket to help the bunny feel safe.

Releasing rabbits back into the wild

How long do wild rabbits live?

Once restored to their natural habitat, wild rabbits live for around two years on average. This is significantly less than a pet rabbit, due to harsher living conditions, greater risk of disease, and predation by other animals. But it’s plenty of time for a doe to successfully rear dozens of kits of her own., and keep rabbit populations buoyant!

A wild rabbit will never attack a person who isn’t trying to pick it up In fact, it won’t want to get close to you at all. As a prey species, rabbits are better adapted to run away from threats rather than try to fight them. In fact eastern cottontails can reach speeds of up to 18mph! The main danger posed to people by wild rabbits is the risk of catching an infectious disease by trapping and handling them.

Wild rabbits pose more of a danger to pet rabbits, if they graze in the same space. For example, rabbit viral hemorrhagic disease can survive in infected droppings for several days. So if you have pet bunnies, and wild rabbits visit your yard, make sure the wild rabbits can’t access the places you let your pet bunnies exercise.

A wild rabbit will only bite if you try to handle them. They will also try to kick their way free with their strong back legs. So if it’s medically necessary to try and catch a wild rabbit, use a humane trap rather than trying to pick them up with your hands.

Can I Keep A Wild Baby Bunny? Summary

Fluffy cottontails look cute in the wild, and that’s where they’re best left. The simple answer to ‘can you keep a wild rabbit as a pet?’ is no. It is impractical, risky, and likely to be an unsatisfying experience. It is also likely to be illegal where you live.

If you like to find out more about how to tame a rabbit from a domestic breed, don’t leave without reading Shy Bunny – How To Get A Timid Rabbit To Trust You.

And whilst the answer to ‘can wild rabbits be pets?’ is a firm no, you’re sure to love owning one of these pet breeds instead:

Birhane et al. Rabies surveillance in the United States during 2015. Journal of the Veterinary Medical Association. 2017.

The Humane Society of the United States