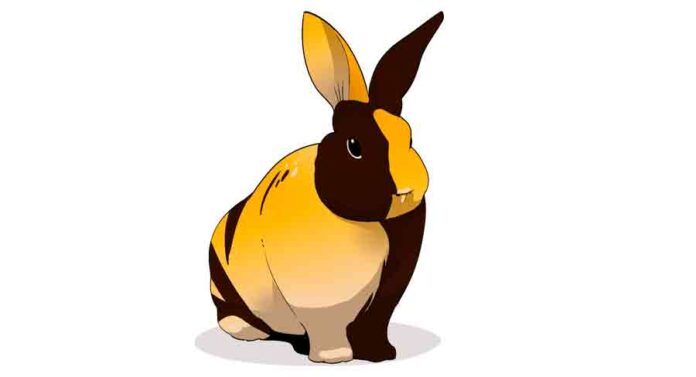 The Harlequin rabbit is famous for the checkered pattern on its coat.

They weigh 6.5 to 10 pounds, and they are popular pets for their temperament as well as their striking looks.

However, they are unusual. So you may have to travel to find a breeder, and there is limited breed-specific information available about their health and life expectancy

Harlequin rabbits are one of the few easily unmistakeable rabbit breeds, but not many people have heard of them.

Here are our readers’ most frequently asked questions about them:

We’ve got the answers to all all of these, and lots of other important information besides, for anyone thinking about bringing home a Harlequin bunny as their next pet.

What’s in this guide to the Harlequin Rabbit

You can click the links to jump around the article, or find out everything there is to know by starting here, with us!

What is a Harlequin Rabbit?

The Harlequin is a breed of pet rabbit.

It has a checkerboard pattern of colors in its coat, which is unique and distinguishes it from all other rabbit breeds.

It is recognized by the American Rabbit Breeders Association (ARBA), and the British Rabbit Council (BRC).

But the path to recognition didn’t always run smoothly…

Where does the Harlequin Rabbit come from?

Harlequin rabbits are first documented in rabbit shows in Paris in the late 19th century.

It’s thought that the Harlequin’s distinctive checkerboard markings first appeared as a mismark in the Dutch rabbit breed, and that all Harlequins are descended from those bunnies.

Despite having absolutely nothing to do with Japan, the first Harlequins were actually known as Japanese rabbits. This was part of an English trend in the 19th century for making new things sound exotic by naming them after far flung places.

Japanese rabbits, as they were still called at the time, were first recorded in the United States in the 1920s.

Then after WW2 they were subjected to another English trend, of rejecting anything with connotations of the countries they had fought against.

And so, the Japanese rabbit was rebranded to become the Harlequin rabbit.

Since the mid-20th century Harlequins have been approved, dropped and reapproved several times by both the BRC and the ARBA.

And bitter disputes have been fought between Harlequin enthusiasts and the national registries, about what the terms of their approval should be.

If you’ve ever wondered what goes into getting a bunny breed accepted by the national registries, and agreeing an ideal standard for show quality individuals, the history of Harlequins as described on their breed club website is eye opening reading!

In the UK, they are estimated to make up less than 1% of the pet rabbit population.

At the time of writing, we couldn’t find data about how many are owned in the U.S.

But there is a thriving breed club, and fans of the breed meet regularly across the country through out the year.

Since rabbits breed easily, it’s unlikely that the Harlequin is at risk of dying out.

But you might have to travel a bit further than average to purchase one.

The Harlequin bunny is defined by its looks.

The ideal Harlequin has a ‘three part frontal alternation’. This means their left ear, the right side of their face, the left of their bib, and their left front foot are all one color.

And their right ear, the left side of their face, and the right of their bib and right front foot are all a second color.

When you look at them face on, the line dividing each side should be crisp and vertical.

Overall, the shape of their body and the texture of their fur is similar to the Dutch rabbits they are descended from.

Their coat is relatively short and stiff, so that if you stroke it in the wrong direction, it flies right back into place.

The maximum size for a Harlequin bunny in show condition is 9.5 pounds.

Does (females) tend to weigh over 7 pounds.

Whilst bucks (males) tend to be slightly smaller. They usually weigh 6.5 to 9 pounds.

The harlequins are all a combination of one black-based color (black, brown or grey), and one red-based color (orange or fawn):

The sweet illustrations accompanying this article are of a brown harlequin Harlequin bunny!

The magpies are all a combination of a black based color, and white:

Harlequin rabbits are usually kept as pets. So, temperament is important to prospective owners!

Some people also enjoy showing their Harlequins at rabbit shows. It is said that trying to achieve kits with perfect markings is a fun breeding challenge.

Of course, it’s possible for rabbits to have both, but the more breeders prioritise temperament, the better pets their litters will be!

All rabbits may bite if they feel threatened.

Harlequin rabbits are unlikely to bite if they have lots of positive experiences with people from a young age.

And if you handle them carefully.

Harlequin rabbits are reasonably intelligent. They aren’t singled out among rabbit fans for being either exceptionally clever, or exceptionally dumb.

Like lots of rabbits they can learn their name, and how to perform simple tricks, using positive reinforcement training.

Since the Harlequin population is small, they are rarely represented in rabbit health research.

However, we know that they are at risk of all the same conditions which affect the rabbit population at large. The most common of these are:

The average lifespan of a pet rabbit is 5-6 years, although it is possible for them to live to 12 years with the right care and a bit of luck.

As far as we’re aware, there haven’t been any studies specifically into the longevity of Harlequin bunnies to see how they compare to the all-rabbit average.

As a Harlequin owner, you can increase your rabbit’s chances of a long life by feeding and housing them appropriately, giving them space for exercise, and housing them with another bunny companion.

How much do Harlequin rabbits cost?

Some breeders may wish to charge more for Harlequins because they are unusual.

Whilst other breeders are specifically opposed to this, because it can turn an unusual breed into a target for unethical breeders pursuing the highest profit margins.

Whilst looking for a pet rabbit, compare the going rates of lots of litters, and be wary of anybody charging much more, or much less, than average.

Caring for your Harlequin

Wherever you keep yours, you’ll need to provide them with a high standard of care, to keep them healthy and avoid unwanted behaviors.

These articles will help you get started:

Any one of these breeds is also likely to be showered with admiring comments:

Is a Harlequin Rabbit right for me?

A Harlequin that has been bred for excellent temperament as well as the classic markings is likely to be a good pet in any bunny-loving household.

Do you already have a Harlequin rabbit?

Do you have a Harlequin rabbit living in your house or yard? We’d love to hear all about them in the comments below!