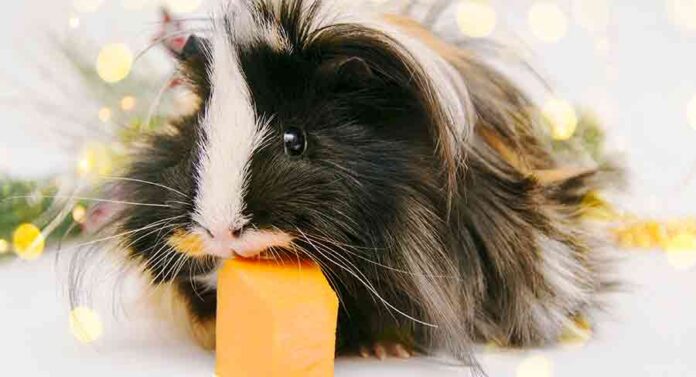 Small amounts of pumpkin are a safe occasional treat for guinea pigs.

Pumpkin contains vitamin C, which is important for guinea pigs. But it also contains sugars which can make them unwell.

Is Pumpkin Safe For Guinea Pigs?

We’re all familiar with halloween pumpkins and pumpkin pie.

But did you know there are actually hundreds of varieties of edible pumpkin?

They are all types of winter squash, which means they are harvested when the seeds inside are mature, and the skin has turned into a tough rind.

All pumpkins are non-toxic to guinea pigs in modest quantities, and have some nutritional benefits. But there are important precautions you should take to serve it safely.

For example removing the seeds and rind, and limiting their portion size.

Let’s look at pumpkin for guinea pigs in more detail.

This should be provided ‘ad libitum’. Which means there should always be enough available for them to take some whenever they want it.

Guinea pigs rely on consuming large amounts of fiber from hay to maintain a healthy and functioning digestive system.

They have a unique balance of good bacteria in their stomachs which help to break down foods high in dietary fiber.

And their gut is designed to be always ‘on the go’. In fact, if they don’t eat enough fiber, their digestive system can grind to a halt and struggle to restart – a condition known as gastric stasis.

In addition to all that hay, an adult guinea pig also needs approximately a cup of vitamin C-rich fresh produce daily.

And some people opt to give them a small serving of pellets fortified with vitamin C too, to ensure their diet is completely balanced.

Where can pumpkin fit in?

Pumpkin is over 91% water. The remaining 9% is mostly carbohydrates, and a small amount of protein.

Pumpkin is relatively low in fiber and high in sugars – great for making pies, but not very well matched to the normal dietary requirements of a guinea pig!

It is also a modest source of vitamin C, which is good news for guinea pigs. We’ll find out why in a moment.

So, pumpkin doesn’t match the nutritional needs of guinea pigs closely enough to be suitable as a significant part of their diet.

However, it can be safe and somewhat nutritious as an occasional treat.

Guinea pigs are selective grazers. Which means that in the wild, they always start each meal with the sweetest, most energy- and nutrient-dense foods they can find. Usually the growing tips of grasses and young plants.

So, lots of guinea guinea pigs are drawn to the taste of pumpkin, because it is high in sugars.

Lots of pet guinea pigs are also naturally curious, and will nibble on just about anything at least once!

However, in the wild the sweet growing tips of plants make up a small proportion of the plant overall. Meaning that a wild guinea pig would be hard pressed to over indulge on them.

But a pet guinea pig faced with a bowlful of pumpkin might not know when to stop, and could end up overdoing it.

Is Pumpkin Bad For Guinea Pigs?

But, in large quantities, the sugars in pumpkin could upset the balance of bacteria in their gut, causing stomach upset and diarrhea.

The sugars in pumpkin can also cause plaque build-up and decay on guinea pigs’ teeth.

And finally the low density of dietary fiber in pumpkin can contribute to the onset of gastric stasis.

Is Pumpkin Good For Guinea Pigs?

Pumpkin contains moderate amounts of vitamin C, which is an important part of the cavy diet.

Unlike most other mammals, guinea pigs are unable to synthesize vitamin C from other compounds in their diet.

So, they need to receive it ‘ready made’.

Pumpkin seeds are not toxic to guinea pigs, but they are not a suitable snack either.

Guinea pigs can’t digest the rind of pumpkins, and it can cause intestinal blockages.

So, they should only be offered peeled pumpkin, and never the rind.

Guinea pigs don’t need any of the fresh veggies in their diet to be cooked.

Cooked vegetables can cause digestive upset and stomach pain.

So, stick to raw pumpkin for their snacks.

Canned pumpkin takes a lot of the hassle out of preparing pumpkin pie.

But, guinea pigs are better off eating slices of fresh pumpkin.

Their teeth grow continuously, and chewing food is essential for keeping them worn down to a comfortable length.

How To Feed Pumpkin To Your Guinea Pig

If you’d like to try sharing pumpkin with your guinea pig, trim them a slice that is free from rind or seeds.

A wide slice or stick of pumpkin is a safe way to offer it, so that your piggie has to nibble off what they’re going to eat.

Offer a very small amount at first, and monitor them for any signs that they’re having difficulty digesting it.

You can offer a little more next time, if they enjoy it and tolerate it well.

Don’t exceed more than a couple of finger-sized pieces of pumpkin once or twice a week.

Their usual daily produce should be predominantly leafy greens such as kale, red bell peppers, and corn.

Pumpkin should be an occasional treat, and if you have lots of guinea pigs living together, make sure that none of them monopolize the pumpkin and eat everyone else’s portion!

This article contains a list of safe alternatives to pumpkin, for snacking on the other days of the week!

Small quantities of raw, peeled, deseeded pumpkin are a safe occasional treat for guinea pigs, but it should only forma a small part of their diet.

Witkowska et al. The Effects of Diet on Anatomy, Physiology and Health in the Guinea Pig. Journal of Animal Health and Behavioural Science. 2017.