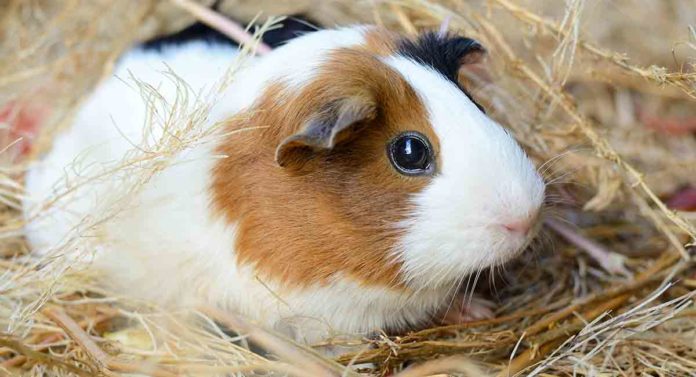 Guinea pig lifespan ranges from 4 to 8 years on average. These affectionate, friendly pocket pets are generally healthy, but their life expectancy varies a lot. Diet, nutrition, genes, breed, boredom, infections and stress all play a part. Today we’ll look at what factors increase the average guinea pig lifespan, and how to help your guinea pig live as long as possible. We’ll also look at predicting how long your pet guinea pigs will live.

There are certainly things that we can do as pet owners to help them live longer, happier lives. And of course, with guinea pigs being so adorable and cuddly, that’s exactly what we want!

How long do guinea pigs live? It’s a natural question if you’re considering bringing one of these small furry friends home. Guinea pig lifespan is influenced by factors like genetics, diet, and environment.

How long can you expect your guinea pig to live, under good circumstances? Animal welfare charities estimates range from a life expectancy of guinea pigs at four to eight years. With some concluding that most will live up to seven years at the most.

This variance can be due to the wide range of genetic and environmental circumstances that individual guinea pigs face. On the whole, they do tend to be fairly short-lived, unlike larger pets. But compared to other smaller pet animals, like pet rats, a lifespan of up to eight years seems quite generous!

Guinea pigs originated in South America, where they were domesticated long ago. Originally, the first domesticated cavies were farmed as a food source.

Still kept for the same reason in many areas, the guinea pig variant we are familiar with no longer exists in the wild. However, some closely related cousins still survive in the grasslands of South America.

These wild guinea pig relatives are quite common. However, guinea pig lifespan in the wild is typically much shorter than those in captivity, ranging from one to four years.

How Long Do Guinea Pigs Live As Pets?

On the other hand, guinea pig lifespan as a pet may be a completely different story. Sources like the ones mentioned above indicate that they can live anywhere from four to eight years on average. Of course, that’s a fairly wide range.

Several different factors can influence how long a guinea pig lives, from food, to genetics, to living conditions. We’ll talk about those in more detail a little later.

But on the whole, you can expect a domesticated animal to live longer than a wild animal. This is often simply because of regular food, vet check ups, and lack of predators. 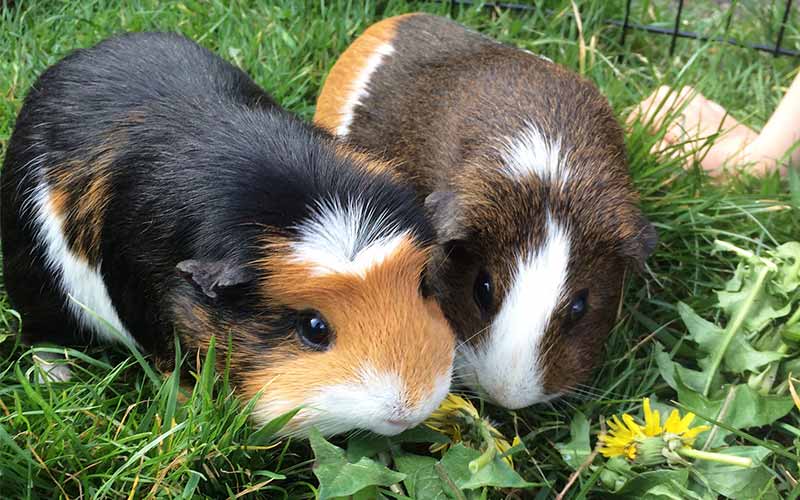 Guinea pigs have a gestation period of about two months or a little more. When the babies are born, there may be only one, or more than six or seven. The average size of a litter is three babies. Newborn guinea pigs come complete with fur and up to twenty teeth at birth. Their eyes open soon after they are born.

At just three weeks, it’s time to separate the boys from the girls. The no-longer-baby female guinea pigs are now sexually mature. Somewhere between nine months to a year, guinea pigs reach their final size and weight and become adults.

How To Tell If Your Guinea Pig Is Getting Old

Guinea pigs age at different rates, so it isn’t always easy simply to go by their actual age. Here are some possible signs that your guinea pig is entering the middle of his golden years. He may lose weight, and become less energetic overall. There may also be changes in muscle tone. He may spend a lot more time sleeping than he used to.

And health problems may seem to be more common. As your guinea pig gets older, it’s ever more important to keep an eye on their health. The older they get, the harder it is for them to recover from health issues.

There are many factors which will influence guinea pig lifespan. The genes they inherit from their parents, the food they eat, their lifestyle and luck will all play a part.

Some of these factors are beyond our control, but there are also lots of things we can do to help our guinea pigs stay healthy for longer. We’ll talk about specific health issues and what we can do to help a little guinea pig lifespan further down. Now, let’s take a look at some deciding factors.

Within all species, there is a genetic component to longevity. Our genes control the aging process at the very minutest level within our cells, and some of us simply inherit better genes for longevity than others. The same applies to guinea pigs.

You can’t test for these kinds of genes, though. So the only clues will be in their family tree, if you have access to it. A guinea pig whose parents and grandparents lived a long time might also be blessed with innate longevity.

Not only can guinea pigs can inherit a general propensity for longevity from their parents, they also inherit very specific genes which influence how long they live.

In fact, all guinea pigs seem to carry a very remarkable sequence of genes which contain the genetic code for Kurloff cells.

Kurloff cells are a specialized type of white blood cell which kill leukemic cells, and protect guinea pigs from many spontaneous tumors. Unfortunately, other genes can bring problems rather than protection. Since these genes are usually associated with specific pedigrees, we’ll look at them in the next section.

There are many pedigrees of guinea pig these days. Guinea pig pedigrees are created and maintained by breeding like guinea pigs with like. So each pedigree becomes it’s own little sub-population of guinea pigs.

This automatically imposes a degree of inbreeding, and puts a limit on genetic variation between individuals within the pedigree.

A common side effect of inbreeding to protect a pedigree is an overall loss in quality and vigor, known as “inbreeding depression.” The corresponding advantage of outbreeding is called “hybrid vigor. Introducing more variation to a genepool boosts animals’ health and longevity.

I can’t find an equivalent study in guinea pigs, but in 2013 Dr Dan O’Neill and colleagues at the Royal Veterinary College in the United Kingdom reported that mongrels live on average 1.2 years longer than purebred dogs. And it’s likely that hybrid guinea pigs also live longer on average than pedigree guinea pigs.

Is guinea pig lifespan determined solely by its genes? Definitely not! Their genes are only part of the story. What they eat and how much they weigh can also add guinea pig years or take them away.

Guinea pigs need plenty of hay, fresh greens, and an appropriate dry food. Fruit and other treats are a fun way to bond with your guinea pig and make sure they’re getting enough vitamin C, but it’s important to find a healthy balance.

Guinea pigs aren’t typically overeaters, but if their diet has too much sugar in it they could become overweight. Carrying excess weight puts strain on their heart and other organs, and can ultimately shrink their lifespan.

Guinea pigs are sociable animals. They’re also pint-sized adventurers who like mental stimulation. Loneliness and boredom can be very stressful for guinea pigs, and this is bad for their long term health in two ways.

Infections can be treated with antibiotics prescribed by your vet, but every infection also carries a risk of being fatal.

Stressed guinea pigs also produce more cortisol, the “fight or flight” hormone. Prolonged elevated levels of cortisol place a strain all of the body’s functions, including the heart and the immune system. Put simply, a bored or lonely guinea pig’s body will wear out sooner.

Guinea pigs are “very prone” to developing urinary stones. Signs of these stones include anorexia and difficulty urinating, among others.

If you see these signs, make sure to contact your vet right away. Your vet will check for urinary stones and a possible urinary tract infection.

If left untreated, this condition could become life-threatening.

Breeding within a confined gene pool can also cause hereditary illnesses to become fixed, and even amplified in successive generations. This has particularly been the case for roan and dalmatian guinea pigs.

The genes which code for roan and dalmatian coloring can also cause blindness, dental problems, and abnormalities within the digestive system. Guinea pigs with these problems often die prematurely when their digestive system fails.

Because of the way these genes are inherited, a responsible breeder can protect future pups by not breeding two roan guinea pigs or two dalmatian guinea pigs together.

So far we’ve largely looked at all the worrying information. Now let’s look at all the good news: the things we can do to help our guinea pigs live long and happy lives! Here are the most important steps you can take to give your guinea pig a long life:

Texel guinea pigs are a relatively new breed, and as such they are still being learned about.

Most breeds of guinea pig have the same hardiness and generally decent health. Therefore, most of them can expect to have about the same lifespan.

The exception, as mentioned previously in this article, may be a guinea pig of mixed parentage.

With hybrid vigor proven in other species, it’s quite likely that a mixed-breed guinea pig life expectancy may be a little longer than others.

However, factors such as environment, diet, exercise, and social requirements all still play a large part in guinea pig lifespan.

So where does it stop? How long can a really lucky guinea pig go on living?

There are many anecdotes of exceptionally old guinea pigs.

The Guinness Book of World Records entry for the world’s longest living guinea pig was a boar in England called Snowball. He reached an extremely stately fourteen years and ten months old.

More recently, but unverified, a boar in Australia called Sweetie was reported to be seventeen years old when he passed away.

These days, if you follow the most up to date advice for looking after guinea pigs, you should expect them to be at least a five or six year commitment. There’s always a chance that with good genetics, environment, and diet, you could end up with a long-lived guinea pig yourself!

It’s important to make sure that your guinea pig eats well and has access to toys. As they are social animals, it’s best for them to have companions. In the last couple of decades some important advice about keeping guinea pigs has changed.

The importance of hay in their diet is better understood and promoted, and welfare experts no longer recommend keeping guinea pigs with rabbits. Making these changes can literally add years to a guinea pig’s life.

How Old Is Your Guinea Pig?

Do you have a guinea pig? Let us know how old they are in the comments below!