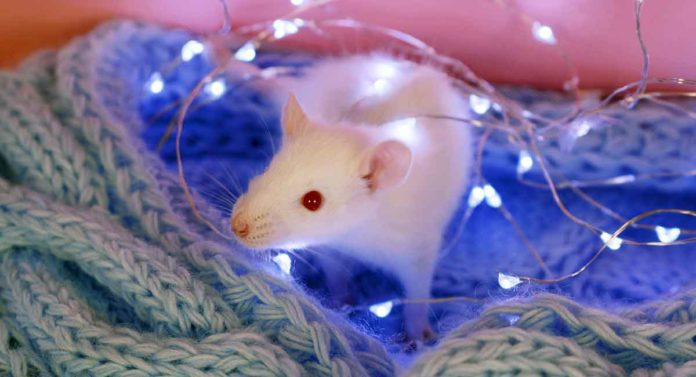 An albino rat is a white rat with red eyes. They are smart, affectionate, social and active creatures. Albino rats make great family pets for older kids to adults. With regularly handling and lots of space they quickly become very tame and friendly. Today we’ll look at where albino rat pups come from, how they are bred and how to raise your own baby pink eyed white rat. Learn dozens of fascinating albino rat facts and get your albino rat questions answered here!

Pet rats are amazing companions if kept properly. Although they have relatively short lifespans, during the time they are with you they bond very strongly to you and each other. They are playful, funny and have their own distinctive personalities. Albino rat pups are popular for their unusual and striking looks, as well as their gentle natures.

What is an Albino Rat?

The white rat or albino rat is a breed without the color pigment melanin. Albinism is a genetic mutation that occasionally appears in rats and other animals in the wild.

This affectionate and intelligent white rat with red eyes has been our beloved pet for centuries. And, few rats are as iconic as the albino rat, with its snowy white fur and famous pink eyes.

Normally, a pure white animal is vulnerable to predators. But rare white albino wild rats were often trapped and kept as pets.

Over the years, this white rat with red eyes has become more popular. This is because the white fur and pink eyes have been cultivated in domestic (or “fancy”) rats as a desired characteristic.

Are you a fan of albino rats? Here are some fascinating facts about them, perfect for any rat lover!

PEW stands for Pink-Eyed White, a common name for these rats among fanciers and breeders.

2. The albino rat is a type of Norway rat

The albino’s scientific name is the same as the Norway rat: Rattus norvegicus.

All domestic rats, including albinos, belong to this one species.

3. The first scientific description of an albino rat appeared in 1553

Swiss naturalist Conrad Gesner is believed to have written the first scientific description of a wild albino Norway rat in 1553.

It’s said he wrote it when saw two of these rats in a cemetery.

4. Albino rats spend most of the daytime hours asleep

New owners should be aware that rats are largely nocturnal animals and are active at night.

5. The pink of an albino rat’s eyes is not an actual eye color

Why are an albino rat’s eyes pink? An albino animal has no pigmentation in its hair or eyes, so the pink that you see is not eye color.

What you are really seeing is the color of the blood vessels inside the rat’s eyes.

6. Only pure white rats with pink eyes can be classified as albino

The official PEW standard calls for bright white fur with no hint of yellow, and medium pink (but not ruby red) eyes.

Pure white fur with no tinge of cream or yellow is the mark of a true white albino and not just a light-colored fancy rat.

7. A group of rats (including albinos) is called a “mischief”

Baby rats are referred to as either kittens or pups.

8. Albinos were the first pet rats

White rats born to wild brown rats were trapped and kept as pets beginning in the 1700s.

Most albino rats would not survive in the wild because their white fur makes them easier to see and more vulnerable to attack by predators than ones with dark fur.

But our pets live a much safer life than those in the wild.

9. Rats, including albino rats, dream about what they did when awake

10. Some Pink-Eyed White rats will sway back and forth

Owners notice that their pets sometimes sway or rock back and forth. Because they, and especially albino rats, have weak eyesight, they use this swaying movement to help them detect motion in their environment.

11. Albino rats share the albinism mutation with other animals, including humans

What exactly are rat albinos? Albinism is the lack of color pigmentation in an organism.

In mammals like rats, this genetic mutation expresses itself as white hair and pink eyes.

Besides mammals, birds, fish, reptiles, insects, and even plants can be albino, too.

The albino mutation is common in many kinds of animals. But rat experts say that albinism in rats is likely the first genetic mutation that was purposely bred by humans in domestic animals.

They can also start breeding as young as 2½ months of age.

A female rat can give birth to her next litter when the first pups are just 21 days old.

It is possible for one pair of rats to generate 15,000 descendants in one year!

14. Albino rats have weaker eyesight than other rats.

Are they blind? They are not blind by nature, but pink-eyed rats do have a harder time seeing than ruby or black-eyed rats.

Rats generally don’t have the best eyesight in the animal kingdom, and they rely on their other senses to compensate for this.

15. Albino rats compensate for poor eyesight with their other senses

Because albinos can have weak eyesight, they depend on their senses of smell, hearing, and touch to help them navigate their environment.

Like cats, they can use their facial whiskers to help them feel around. As they’re so dependent on their whiskers, you’ll rarely catch rats out in the open. They tend to stick close to walls and corners — surfaces their whiskers can feel.

16. Albino rats can have red tears

It is a myth that these little animals bleed from their eyes. But occasionally they do secrete an organic compound called porphyrin from a gland near the eye called the Harderian gland.

Porphyrin is thought to help protect the eye from light. It can mix in with their tears and give the appearance of bleeding.

Because they lack protective dark pigment in their eyes, these rats are sensitive to bright light.

“Dazzling” occurs when too much bright light floods their eyes and impairs their vision.

18. Wood chips and shavings can cause breathing difficulties in albino and other types of rats

Fine sawdust can be especially harmful to your rat’s lungs.

Be sure to line your pet rat’s cage with either hay, shredded paper, or a good quality commercial bedding material.

19. The albino rat is one of the most common laboratory animals

Why are they used in research? In the 1800s, hooded rats were commonly used in scientific research.

The offspring of the original albinos were tame and gentle and became the preferred rat type for lab research. One reason why white rats are used in research is how accessible they are. They breed rather quickly and cost almost nothing to be used.

Another reason why they are the perfect research specimen is their similarity to humans. As mammals, these small creatures have shown genetic, biological and behavioral similarities with humans.

Therefore, they can be used in research for cancer, human psychology, hormonal issues, and even obesity.

20. There are specific types of albino rats bred for laboratory research

Beginning in the early 1900s, different strains of these animals were bred for scientific research.

Wistar are among the most popular, first bred at the Wistar Institute in Pennsylvania in 1906.

She dedicated her story, The Tale of Samuel Whiskers to her childhood pet rat.

22. Albino and other rats make a noise called “bruxing”

How can you tell if your rat is happy?

A contented rat will chatter or grind its teeth together, called “bruxing.”

This helps sharpen the teeth and is also a sign of relaxation (but some rats will brux when stressed).

The albinism mutation hides the true color of an affected rat — without the mutation, your pale pet would be brown, black, or any other color.

If an albino is bred with a normal rat, its babies can inherit that hidden color.

24. The albino rat lifespan is the same as other fancy rats

How long do they live?

But, some can come from less healthy feeder or lab ratlines, so be sure to purchase your pet from a reputable breeder.

25. Albinos (and other varieties of rats) spend more time grooming than most other animals, even cats

Most rats do not have an unpleasant smell and don’t need to be bathed by us. However, many rats do like to swim!

26. Albino rats can be hairless

Is there such a thing as an albino hairless rat? Yes, many hairless rats were created by scientists from albino laboratory rats.

Hairlessness (and other traits found in these rats) is a desired characteristic for certain research purposes. Pet fancy rats can also be hairless albinos.

27. Dumbo rats can have the albino mutation

An albino dumbo rat is a fancy rat of the dumbo variety (big, wide-set ears) that happens to have the albino mutation.

Dumbo and albino are both recessive genetic traits, which means that they only appear in an animal when two copies of the genes are present.

28. Fancy rats, including albinos, are “neophobic”

Neophobia is a fear of new things. In rats, this especially applies to food.

Experts say that rats are cautious around unfamiliar foods because they cannot vomit. A rat will try a small bit of new food and wait a few hours to make sure it’s safe before eating more of it.

29. An albino rat named Hector was the first rat in space

The French sent an albino rat named Hector into space in 1961. He flew in a space capsule to a height of over 90 miles and was successfully recovered after his flight.

30. Albino lab rats are characters in Mrs. Frisby and the Rats of NIMH

The classic children’s book Mrs. Frisby and the Rats of NIMH tells the story of intelligent lab rats that have escaped from the National Institute of Mental Health, and help save a family of field mice.

Rats are also compassionate! A study by the University of Chicago proved that rats manifest helping behavior. When one rat was trapped in a cage, another rat present tried to free it.

Rats are also notoriously community-minded. They tend to stick together. So your rat would be grateful to have another rat in the family.

32. Albino rats are revered In a part of India

Ending on a high note, the Karni Mata temple in India reveres white rats. While the temple is home to over 25,000 black rats, just a few white rats are there.

The people believe these few white rats to be manifestations of the goddess, Karni Mata herself and her four sons. Legend has it that seeing the white rats is a special blessing.

Anyone who kills one of these rats must bring a silver or gold rat as a replacement.

So there you have it — thirty things you never knew about white rats!

I hope you’ve enjoyed getting better acquainted with the white albino rat. Especially if you’re getting one as a pet.

If you already have albino rats at home, do tell us what you think makes them unique in the comments section below.

Can Rats Eat Chocolate? Can My Pet Rat Have Chocolate As A Treat?