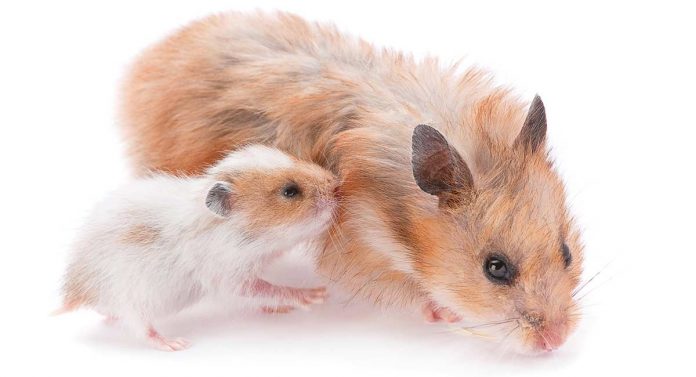 A pregnant hamster usually gives birth to a litter of 6 to 12 pups about two to three weeks after mating.

The average litter size and gestation period of pregnant hamsters varies according to their breed, and some environmental factors.

Pregnant hamsters need special care before, during, and after the birth, to protect their health and the survival of their babies.

This article contains everything you need to know about caring for your pregnant hamster and preparing for the birth of her litter.

It doesn’t matter if you have a pregnant teddy bear hamster or a pregnant robo hamster.

We’ll walk you through the whole process, from making the decision to breed from her, to helping her recover after the birth.

You can use these links to navigate to stages:

Or, join us at the very beginning of the hamster pregnancy journey.

Starting with making the decision to breed.

Deciding To Breed – The Beginning Of Your Hamster Pregnancy Journey

In a perfect world, hamster pregnancy begins with a deliberate decision to breed baby hamsters.

Of course, this isn’t always the case.

Unplanned pregnancies occur when baby hamsters sold together have been incorrectly sexed.

Or when an already-pregnant female hamster is sold or rehomed, for whatever reason.

Or if inexperienced hamster parents don’t realise how young females can get pregnant (often by just 4 weeks old!), and fail to separate them from males soon enough.

Some owners breed their hamsters to reproduce qualities they have enjoyed in the litter’s parents.

Other pet parents plan to sell the pups, and hopefully make a small profit.

Did You Know?
It’s not just pet parents who get excited about pregnant hamsters. Doctors and scientists have learned a lot about what causes ectopic pregnancies in humans, and how to increase the chances of IVF success, by studying pregnancy in the humble hamster.

Hamster breeding is not to be undertaken lightly.

Litters can be very large indeed (more on that in a moment), and you’ll need space and money to house and care for any that can’t be sold or rehomed.

Pregnancy and giving birth isn’t risk free for mom or her babies either.

Some babies may die during birth, or shortly after. Female hamsters can also die as a result of a difficult birth.

Planned hamster breeding is best embarked upon with healthy hamsters from responsible breeders, and under the mentorship of a more experienced hamster breeder.

If a female hamster shares a cage with a male, for any period of time, it’s very likely that she will become pregnant.

From then on, they come into heat every four days!

However, complications giving birth are more common in very young hamsters, and older first time moms. So experienced breeders sometimes recommend mating a female hamster for the first time between 4 and 8 months old.

Female hamsters are most receptive to mating at night, but they can become aggressive towards the males after mating has taken place.

So you’ll need to be prepared to stay up, and supervise their encounters!

The safest way to mate a hamster for the first time is by asking a more experienced breeder to guide you through the process.

A mentor can point out the behaviors which mean your female hamster is happy to be approached by a male.

And help manage problems along the way.

How To Tell If Your Hamster Is Pregnant

Once mating is achieved, how do you know if your hamster is pregnant?

Here are some examples of pregnant hamster behavior to look out for:

A swollen belly is usually seen during the final week of pregnancy.

But it’s important to be aware that a swollen belly can also be a sign of illness.

If your hamster has an enlarged belly that lasts longer than 7 days, and she hasn’t given birth, then take her to the vet.

Other than the swollen belly, you may also notice your hamster has enlarged nipples in the final days of pregnancy.

This can be hard to identify on a pregnant dwarf hamster due to their tiny size.

It can also be difficult with long-haired hamsters such as pregnant Syrian hamsters, as well.

If you think your hamster might be pregnant, but you’re not sure, ask a more experienced breeder or a vet to examine her.

Do not attempt to feel for the babies in her tummy.

The unborn pups are very delicate, and easily injured or killed by applying pressure to their mom’s belly.

How To Care For A Pregnant Hamster

While your hamster is pregnant, there are some simple ways to keep her healthy and strong, all the way through to giving birth:

Don’t handle her if you can avoid it once her bump has begun to show.

She is likely to find it stressful, and react aggressively. Persisting could cause her to abort her unborn babies.

In the last couple of days before giving birth, she will want to be left completely alone.

At this point, don’t touch or tamper with her cage or bedding. Also, be very careful when putting in fresh food or water.

How Long Are Hamsters Pregnant For?

The hamster pregnancy period is slightly different for each breed.

The Syrian hamster has the shortest hamster pregnancy length, of only 16 days.

The Robo hamster’s pregnancy is the longest, at 22 to 30 days.

The Chinese hamster is pregnant for 18 to 23 days.

Hamsters like to give birth in private, a day or so before her babies are due, you might notice your hamster retreats into her nest for most of time.

Alternatively, she might become rather listless and move around more.

An experienced breeder will be able to reassure which behaviors are normal, and which are signs she’s in distress.

Inside the nest, she’ll be cleaning them up, and starting to nurse them.

But, you must leave mom and her litter alone as much as possible for the first week after the birth.

Hamsters usually give birth during the day, and you’ll be able to tell that it’s happened from the sounds of hungry babies jostling for access to mom.

Don’t handle the pups for two to three weeks after the birth.

Attempting to touch them or pick them up too early can result in mom rejecting or even killing them.

How Many Babies Can A Hamster Have?

Did you know that hamsters can have up to 20 pups per litter?

The average is only seven, but that’s still a lot of babies to rehome!

Most litters have between 6 and 12 pups in them.

They have fewer babies when the temperature is colder than average.

Interestingly, their litters also have a higher ratio of male pups as winter draws closer. This is triggered by the days getting shorter, and improves her babies’ chances of survival – juvenile male hamsters are more likely to survive in cold weather, because they are slightly larger.

In captivity, the number of pups a hamster has is also linked to how many other hamsters they share a habitat with.

But despite being solitary animals in the wild, captive hamsters actually have more babies if they’re housed with other females!

Once your pregnant hamster has her babies, it’s important to do the following:

If you see the mother abandoning the whole litter, you should separate her from them and take the babies to your vet.

Once the babies are old enough (3-4 weeks), it’s important to start taming them.

At 4 weeks, make sure you separate any male babies from the females, or you may end up with another pregnant hamster.

Keep mom away from males as well – hamsters can conceive again within a day of giving birth.

Their fertility isn’t suppressed by nursing babies, so they can even get pregnant again before their previous litter is weaned.

You should consider separating all of the hamsters, from each other and from mom, by the time they are six weeks old.

Want to know more about taking care of the babies? You can read all about it in our complete guide to baby hamsters.

Looking after a pregnant hamster and playing a role in raising her babies is an exciting time for any pet lover.

But it’s a big undertaking, with risks to both mom and her babies.

So anyone committing to it should have a frank talk with a more experienced breeder first, and ask themselves whether they have space to raise up to 20 new hamsters if they can’t be rehomed.

Is your hamster pregnant?

We’d love to hear how it’s going in the comments box down below!

Hirose & Ogura. The golden (Syrian) hamster as a model for the study of reproductive biology: Past, present, and future. Reproductive Medicine and Biology. 2018. 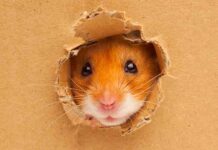