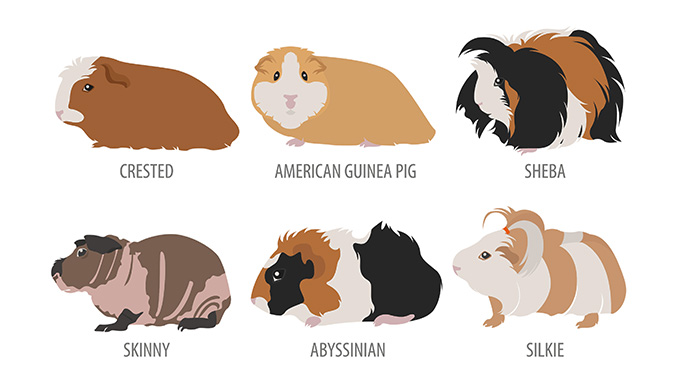 The best guinea pig breed for one person may not be the same as for their neighbor.

The best breed of guinea pig for anyone depends upon the amount of time the have for things like grooming, the habitat they plan to keep them in, and personal taste.

In this article, we take a look at what qualities might make one breed of guinea pig your own personal favorite.

What Is The Best Breed Of Guinea Pig?

I have a Rex guinea pig, an Abyssinian and an American guinea pig. They’re all awesome, and I honestly couldn’t pick a favorite from them.

But that’s partly because when I was looking for them, I already knew there were some breeds which wouldn’t suit me.

The idea of brushing a guinea pig every single day was underwhelming. And in my mind that amount of effort simply wasn’t outweighed by the prospect of a perfectly coiffed, long-haired piggy at the end of it.

Likewise, we knew our pigs would be sleeping in an outdoor hutch as much as possible.

So whilst I do feel quite affectionate towards the hairless breeds, they simply wouldn’t have felt the same way about me, once they saw their living quarters.

And finally, my daughter was very young at the time. So I knew our ideal breed would be friendly, short coated, and easy to keep.

But at the end of the day, all the other amazing and varied guinea pig breeds that also exist do so because every one of them is the best breed for someone.

So, let’s have a look at the ways you might choose the best guinea pig breed for you.

Let’s start with the most popular guinea pig breed.

Popular breeds tend to be popular for a reason – they’re good all-rounders, and fit well into lots of homes.

The most popular guinea pig breed in America is the American guinea pig.

They are the archetypal cavy, and probably the first mental image that pops into your head when you think of a guinea pig.

You’ll love an American guinea pig because they tend to be friendly, trusting, and easy to tame.

Their short coat requires minimal grooming, and they can live indoors or out.

And they’re easy to find – there are American guinea pig breeders in action all over the country!

For lots of people, smaller means cuter and better.

The smallest guinea pig breeds are:

The smallest individuals from these breeds are as little as 7 inches long, and weigh just a pound or two.

But bear in mind that this is the lower end of a natural weight range. It tops out much higher!

Most piggies achieve a final adult size somewhere between the sizes of their parents. So if having a small guinea pig matters to you, ask breeders about the size of their litter’s parents.

And bear in mind that a guinea pig’s size relative to other cavies doesn’t make any difference in terms of how much space they need.

Whatever their size, plan for at least four square feet of space per pig in their hutch or cage.

As well as being adorably small, guinea pigs can also be impressively large.

The Rex guinea pig breed grows up to 17 inches long, and can weigh over 2.5 pounds!

Rex’s also have a wiry, bottle-brush coat which stands out from their body, giving an even bigger sense of volume.

Despite its unusual texture, the Rex’s coat doesn’t require any more maintenance than a short haired breed. In fact heavy brushing can result in the brittle hairs breaking.

Since their coat does break easily, not all Rex’s are happy sleeping outdoors. Depending on your climate, they may need an indoor cage for all or part of the year.

And some vets also believe that since the same gene that makes their fur prone to breakage also affects their whiskers, it’s not really fair to breed them at all.

However it’s not presently clear how much guinea pigs rely on their whiskers as a sensory organ, relative to their other senses.

In some regions of the U.S. there’s an increasing interest in domesticating the large guinea pig breeds reared for food in South America. They have even been sold in national pet stores as ‘giant guinea pigs’.

But, despite being the same species as pet guinea pig breeds, these South American breeds have never been properly domesticated.

They tend to be very frightened around people, and strongly dislike being handled. They are also significantly bigger and stronger than traditional pet breeds.

Many end up in rescue shelters, and for that reason, animal welfare experts don’t recommend getting one in the first place.

The last couple of decades have seen a surge in guinea pig varieties with unusual, crimped or curly coats.

Clearly, fluffy cavies are the guinea pig breeds many people were waiting for!

The Peruvian and the Silkie are the original long haired guinea pig breeds. They have straight, sleek hair which can grow several inches long.

They need brushing every day to prevent uncomfortable problems like tangles, and potentially lethal ones like flystrike.

More recently, the Texel, Minipli, Alpaca, and Merino varieties have all been developed to have fluffy, scruffy, corkscrew curls.

They are cuddly and photogenic, but still relatively rare. So in some regions you may have to join a breeder’s waiting list for a pup.

They’re frequently chatty, excited to see you, and happy to be cuddled and petted.

Some breeds have a reputation for being easier to tame than others, and more docile when held.

But breed is only one factor which may affect how friendly a guinea pig is.

And we don’t actually have any evidence about how significant it is, relative to things like how much they are handled as pups, and how much effort you’ve put into making them comfortable with you.

This article is all about how to tame a guinea pig, so that whichever breed you choose will become a friendly companion.

All guinea pigs can live happily in an indoor cage.

Long haired breeds like the Peruvian may also be safer living indoors because it reduces the risk of flystrike.

And of course completely hairless breeds like the Baldwin and the Skinny Pig have to live indoors.

Even indoors, you’ll need to take care to make sure their habitat doesn’t get too hot, or too cold.

On the other hand, lots of people can’t give a group of guinea pigs the space they need indoors.

And that’s ok – they need a lot of space, and most cavies are well adapted to live outdoors anyway.

In fact, most short coated guinea pigs will thrive happily outside, provided the night time and winter temperatures in your region don’t routinely fall below 60∘F (15∘C).

Which Is The Best Guinea Pig Breed For Beginners?

With so many varieties to choose from, where should you turn if none leap out at you?

Or if you’re nervous about becoming a first time guinea pig owner?

They’re friendly, easy to find, and don’t have any additional care needs

You can read more about looking after your first guinea pig pet here!

Beauty is in the eye of the beholder as they say, and we think the same is true of choosing the best guinea pig breed!

The cavy which gets you most excited might leave other people feeling cold.

It’s these differences between us which have produced such a wide variety of breeds today – and that variety is something we can all appreciate!

Which Guinea Pig Breed Do You Think Is Best?

Does one single guinea pig breed clearly beat the rest for you?

Or are you like me, and unable to narrow it down?