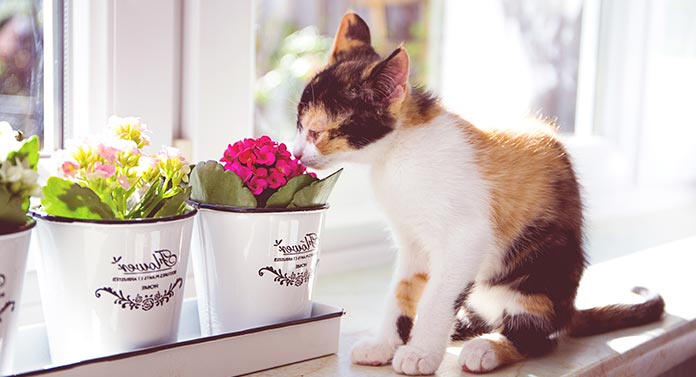 They have a more powerful nose than we can even imagine, so you might be wondering what smells do cats like to get such a clear whiff of?

Cats particularly like the smell of some plants, anything they can eat, and the other members of their social group.

They also like their own smell, and use it to label things they perceive as ‘theirs’.

This article is all about your cat’s relationship with their most powerful sense.

A cat’s sense of smell is their dominant source of information about the world.

In humans, the surface area inside our nose dedicated to bearing odor receptors covers a mere 0.3 to 0.5 square inches.

Inside the comparatively tiny nose of a cat, there are a whopping THREE square inches of receptors dedicated to trapping odor molecules and sending information about them back to the brain!

So, they can detects odors at much lower concentrations than we can.

Furthermore, they have a special organ in the roof of their mouth called a vomeronasal organ, which detects a whole category of scents that are outside our perception at any concentration. They are the nasal equivalent of being able to see in infrared, or hear ultrasound.

With such a rich and detailed sense of smell, which are the scents cats get excited to encounter?

Here are the top 10 cat-pleasing aromas, followed some they really dislike.

Catnip consists of dried leaves from the catnip plant, also known as catmint, catwort, and by its Latin name, Nepeta cataria.

It contains several specific chemical compounds which have a stimulating effect on some cats.

Cats who love catnip may

Vets and behaviorists often describe the reaction as being akin to euphoria.

But weakness for catnip is actually a hereditary trait in cats, so not all felines experience that euphoric response.

Around two thirds of cats go completely giddy for it, whilst the remaining third are resolutely unaffected.

If your cat is unmoved by the fragrance of catnip, there’s no point trying to coax them into feeling any differently – it’s a genetic trait that can’t be learned or taught.

However, they might fall in love with the fragrance of one of the following cat-friendly plants instead.

Silver vine is a close relative of the kiwi fruit plant, and so-named for its pale colored leaves.

The fruits and fruit galls from silver vine can be dried and crushed, and used in cat toys in the same way as catnip.

The effect on feline behavior is very similar to that of catnip too.

According to one study, 4 out of 5 cats love the smell of silver vine, and that includes three quarters of the cats who are unimpressed by catnip.

Whilst you may not have heard of it before, you’ll be able to find silver vine alongside catnip in most large pet stores, and online.

Now here’s a beautiful fragrance that humans and cats can agree on!

Well, half of cats.

One study specifically focussed on the Tatarian variety of honeysuckle found that about 50% of cats have a mild to intense pleasurable reaction to chemical compounds in the wood.

However, the berries of some honeysuckle varieties are toxic to plants, so if you grow this plant in your yard for the amusement of your cat, take care that they don’t consume any.

Valerian is a herb which grows widely throughout Europe and Asia. It has been used by humans as a sedative and a cure for insomnia since ancient times.

About half of cats also respond positively to the smell of cut and dried valerian root.

Except rather than go to sleep, they have a euphoric response similar to cats enjoying catnip.

This is thought to be because it contains chemical compounds which are very similar to those in catnip.

Lots of cat owners report that their pets are drawn to the scent of olive trees, and may scratch their bark to release the aroma, or break twigs off to play with.

This is because yet again, olive plants contain similar compounds to catnip.

Interestingly, several researchers are now exploring the possibility that extracts of a different compound from olive plants can have powerful antiviral effects, including perhaps the potential to combat feline herpes virus and feline leukemia virus.

But for now, your cat’s enjoyment of olive plants is purely for fun, not any medicinal purpose.

Humans have long used lavender to promote feelings of calm.

And some cats appear to have a similar response.

One small study of cats visiting a veterinary clinic found that exposure to lavender fragrance reduced behaviors associated with stress and anxiety.

But this flower seems to have a love-it-or-hate-it effect on felines, and some cats will go out of their way to avoid it.

This might be because it’s so pungent, that pleasant levels of lavender fragrance can quickly tip into being an overwhelming stench for their super-sensitive noses.

Let’s move away from plants, and onto a completely different source of smells that cats like – food smells!

Despite how powerful their noses are, cats don’t actually rely very much on their sense of smell for hunting.

But this doesn’t stop them twitching their nose at tasty aromas inside your home though.

Few things grab a cat’s full attention like the smell of their favorite dinner hitting the bowl!

Interestingly though, impregnating toys with the smell of prey animals doesn’t hold their interest for long.

Although at least that means there’s no obligation on us to keep a selection of toys impregnated with eau de dead rabbit around!

You probably don’t need me to tell you that a cat’s interest in food smells is rarely limited to their own meals!

Lots of other food smells pique a cat’s curiosity too, even if they don’t belong to something they would ultimately eat.

That’s because we serve a lot of our meals warm, which makes them extra-smelly and worthy of further examination.

So they’re intriguing for cats, even if they’re not appetizing!

From the moment they are born, kittens can recognize the smell of their mom and their nest.

Even before they can see, a kitten removed a short distance from the nest will be able to use their sense of smell to orientate towards the nest and call for help.

The smell of the nest also gives them comfort and reduces distress.

As they grow up, they also learn to recognize and appreciate the smell of other cats from their social group.

They do this by producing and detecting special scents from glands in their cheeks, called pheromones.

We can’t smell them, but cats can, using their vomeronasal organ.

Every cat has their own unique, individual pheromone signature.

Colonies of feral cats and families of pet cats also groom each other and rub cheeks to mingle their smells and create a distinctive group odor which they recognize each other by.

And it turns out that cats also respond positively to feline facial pheromones even when they aren’t being produced by another cat.

Synthetic facial pheromones in products like Feliway reduce anxiety, and promote behaviors associated with well-being, such as playing, eating well, and engaging with other people and animals.

Have you ever noticed your cat rubbing their cheeks on the walls of your house, or scratching the door frames?

When they do this, they leave traces of their own unique pheromone signature behind.

In future, when they revisit the area, they like to find their scent already there.

It’s a way of asserting their ownership of a territory, and it makes them feel confident, secure, and relaxed in their environment.

Just like cats, we humans all have our own unique body odor, and it’s something your cat uses to identify you by.

It’s also why they’ll reject a brand new cat bed in favor of curling up on your favorite sweater again.

That sweater you love to wear so much absolutely stinks of you, and your cat loves that.

Your scent triggers all the positive emotions and associations that your cat has of you, and makes them feel safe, secure, and happy.

What smells do cats dislike?

We’ve seen some smells that cats love. What about some they’re not so keen on?

Cats’ noses are very sensitive, so anything too potent is likely to be overwhelming for them.

This includes essential oils, which are so potent they can even cause respiratory problems.

It’s a smart preference, because limonene, a key compound in the rind of lemons, limes, oranges and grapefruits, is toxic to cats.

Exposure to too much causes excessive salivation, loss of coordination, shivering and dermatitis.

Cats tend to dislike spicy smells, so you may notice they retreat to a bedroom or out into the yard when you cook with them.

Many cats feel threatened by the scent of unfamiliar cats and people.

They might even react negatively to a familiar cat, if they have been taken to the vet or groomer and returned smelling “wrong”.

Creating a sweet smelling world for your cat

Understanding what smells your cat enjoys and dislikes is really useful for creating an enriching home environment for them.

Which aromas get your cat purring, and which do they clearly hate?

Let us know in the comments box!

Ellis et al. The influence of olfactory stimulation on the behaviour of cats housed in a rescue shelter. Applied Animal Behaviour Science. 2010.

Goodwin & Reynolds. Can aromatherapy be used to reduce anxiety in hospitalised felines? The Veterinary Nurse. 2018. 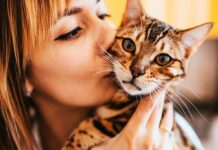 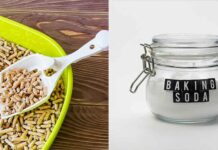 Can You Put Baking Soda in Cat Litter? 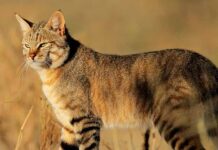