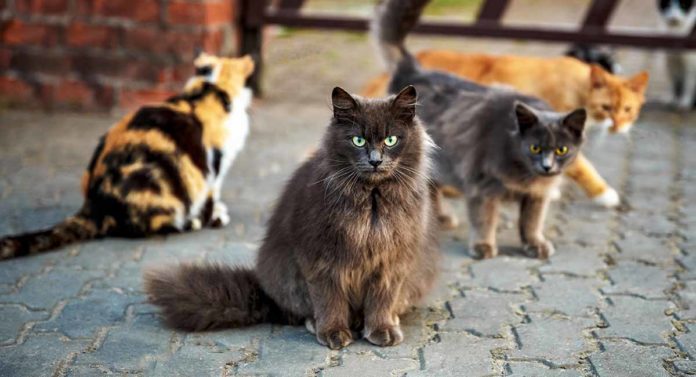 Feral cats are a type of outdoor cat, alongside strays, and outdoor domestic cats.

Outdoor cats are common sights in just about every city, town, and community around the world.

You might watch with amusement – or even bemused annoyance – as they hang out on your deck, scrabble with other cats, or go after the songbirds in your bird feeder.

While most people assume that strays, feral cats, and domesticated cats are the same thing, there are several key differences you need to be aware of. The Humane Society estimates that there are around 40 million feral cats living in the United States.

While these are the same species as domestic cats, they have never experienced domesticity – and therefore need to be dealt with in an entirely different way.

What is a Feral Cat?

A feral cat is one that is undomesticated and unowned by any humans. It will live outdoors and mostly avoid any human contact, usually not allowing itself to be touched or handled in any way.

Often – though not always – feral cats will attempt to remain hidden from humans, and only emerge at dusk to do their hunting.

Feral cats can be devastating to local wildlife, and are considered an invasive species in many areas. However, they have a unique history.

In ancient Egypt, wild cats were respected and worshipped for their abilities to kill rodents and venomous snakes, which led to them being domesticated around this time.

In North America, domestic cats also began to produce feral populations if they got lost or were abandoned.

There are several subspecies of cats in the world that are believed to be predominantly feral. These include Felis lybica var sarda, which looks similar to an African wildcat.

Felis reyi is a smaller version of this species, possessing a shorter tail and a darker fur color.

You can find feral cats just about anywhere you go, as it is the most widely distributed carnivore. Some places in the world, like the Japanese island of Aoshima, are famous for their feral populations.

Many people confuse feral cats with strays, but the two are quite distinct. A stray cat is one who has been socialized to people at one point or another, but has become homeless.

A stray cat can become feral, but it can also become a pet once again.

Feral cats, on the other hand, have never had any contact with humans at all. These cats will be extremely fearful of humans, but also able to survive on its own outdoors.

This kind of cat will never become a pet cat or enjoy indoor living. That being said, kittens born to feral cats can be domesticated if they are adopted at an early age.

To identify a feral cat there are a few key behaviors to keep an eye out for.

A feral cat will not approach you and will seek out hiding places to avoid people, often doing most of its hunting in the middle of the night to do so. They occasionally live alone, but often belong to colonies.

Nor will a feral cat make eye contact with you, and it will usually crawl, crouch, or stay low to the ground. It will protect its body with its tail and it may hiss and snarl at you when you approach.

Feral cats only purr and meow in the company of other felines.

Interestingly, a feral cat will usually be quite well-kept. Like domestic cats, they are fastidious groomers.

Males may have scars and injuries from fighting though.

Feral cats usually won’t go after you or your pets – despite common fears that state otherwise.

Feral cats are nocturnal and tend to stay away from domesticated animals and people. While they will occasionally become “friendly” toward humans who feed them, they won’t beg for food and prefer to keep their distance.

Can Feral Cats Be Tamed?

It is very difficult to tame a feral cat, and it’s not recommended that you do this unless you have extensive experience working with animals.

It is much easier to tame feral kittens being offered by a rescue shelter. Experienced feral animal handlers can humanely separate feral kittens from their mothers at six weeks of age. The younger the animal is, the easier it will be to tame.

Feral kittens often spit and hiss at humans, and have an innate fear of human contact. For the first few days you have a feral kitten, it’s important to allow it a lot of space and privacy.

Check on them regularly, talking to it in a low voice, but do not touch it.

After the first few days have passed, you can start to approach your feral kitten and offer treats and snack.

Avoid staring at him for too long, as this is an aggressive body language to them.

Instead, interact calmly and gently with your feral kitten, brushing it with a soft brush and playing with toys.

Allow your kitten to explore your home, but make sure it is fully kitten-proof. Socializing is key during this period, but you need to introduce a feral cat to other members of your home – including other animals – very gradually.

Can Older Feral Cats Be Tamed?

Most people will not have the experience or time necessary to tame an older feral cat, so it’s usually advised that you seek alternative pathways if you encounter one on your property.

If you have a feral cat hanging out on your property, catch it humanely with a Havahart or box trap.

Contact a local no-kill shelter to find out if they have any trap, neuter, return (TNR) programs. These shelters will then neuter or spay one of the cats and return it to its home.

Some humane societies will take feral cats. In rare cases, they may try to train and rehome these felines.

You can also contact local farms to find out whether they are interested in rehoming a feral cat.

You should avoid calling a shelter with standard euthanization policies. If a cat is exhibiting feral behaviors, in most cases the shelter will put it down.

Even if they do not euthanize the cat, this process can be extremely stressful for the animal – particularly if it is not eventually released.

In the wild, feral cats primarily eat scavenged food. They take this from dumpsters, trash cans, and other municipal waste sources.

However, if you encounter a feral cat, you obviously won’t have any of these foods on hand! It’s usually best to allow them to find their own food, particularly if they seem to be thriving on their own.

If it appears that nobody is caring for a colony of feral cats, though, you can choose to provide them with food once a day.

Dry food is best, and you should leave it in an inconspicuous location such as behind a dumpster. This will allow them to feed in peace.

You should try to feed and water the cats in a location that is secluded and far away from human activity to make them more comfortable.

Feed during the daytime, and make sure feeding areas are kept clean to avoid attracting other animals or causing fights among the feral cats.

If you’re interested in rescuing a feral cat, you will need to research your local cat adoption agency. The process is much different than it would be adopting a standard cat, and you’ll need to have certain resources prepared.

For example, you will need to have a safe room prepared because they will look for hiding places immediately once you get them home.

Prepare a spot to be guarded against any damage. A feral cat will not be housebroken and will be more likely to eliminate on your furniture and floor.

You will also want to have ample time set aside to train your feral cat to use a litter box.

This box should include a substrate that is as close to the natural environment as possible – such as sand or dirt – so that your cat can feel at home.

If you are rescuing a feral cat, you will need to have plenty of land available – some rescue agencies request that you keep feral cats in natural colonies outdoors – as well as spots for your cats to perch.

You will want to provide them with plenty of exercise in their new homes, too.

Remember, feral cats are very difficult – and often impossible – to rescue. Your best bet is in rescuing a feral kitten, as adult cats can be challenging to work with.

How to Tell if a Cat is Feral

Feral cats usually have small home ranges, and because they look identical to domestic, it can be tough to tell the difference between the two – particularly if you are dealing with a scared pet that avoids human contact.

Be careful approaching a cat that you suspect is feral. As with all cats, feral cats are susceptible to certain diseases like rabies, toxoplasmosis, and parasites.

Many of these diseases can be transmitted to humans – in fact, of all the people infected with rabies in the United States, 16 percent are believed to have been infected by feral cats.

The majority of cats you encounter in the daytime are more likely to be a domesticated, as they prefer to be nocturnal.

Domesticated cats will also be vocal, meowing or responding to your voice in some way. They are also more likely to make eye contact.

If you find a feral cat, you have a couple of options, but not all of them should be considered.

Do not attempt to bring an adult feral cat into your home. Instead, call your local wildlife authorities or return the cat to its colony home outside.

If you find a feral kitten, however, you may be able to socialize it for adoption. You should still contact your local rescue organization in this case.

If you love all things cat, make sure you also read our favorite cat quotes!

Or perhaps you’d be interested in learning how to cope with cat dry skin.

Driscoll et al. “The Taming of the Cat.” Scientific American. 2009.

Gosling et. al. “What is a feral cat?: Variation in definitions may be associated with different management strategies.” Journal of Feline Medicine and Surgery. 2013.

Kitchener et al. “A revised taxonomy of the Felidae : The final report of the Cat Classification Task Force of the IUCN Cat Specialist Group.” Cat News. 2017.

Slater et. al. “A survey of the methods used in shelter and rescue programs to identify feral and frightened pet cats.” Journal of Feline Medicine and Surgery. 2010. 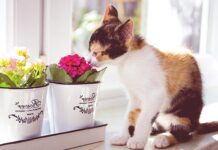 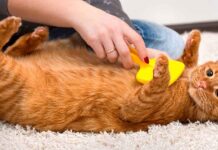 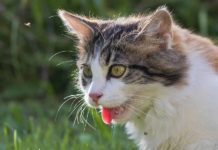