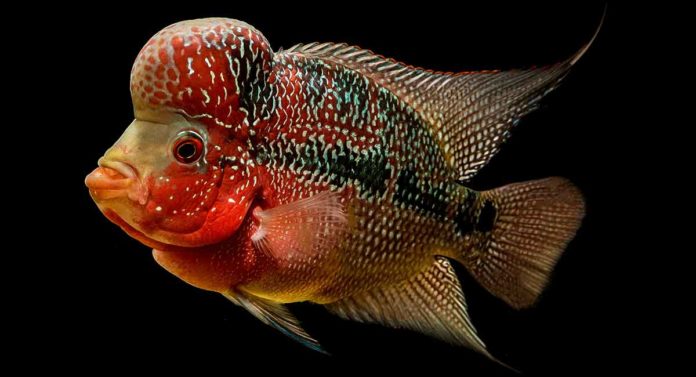 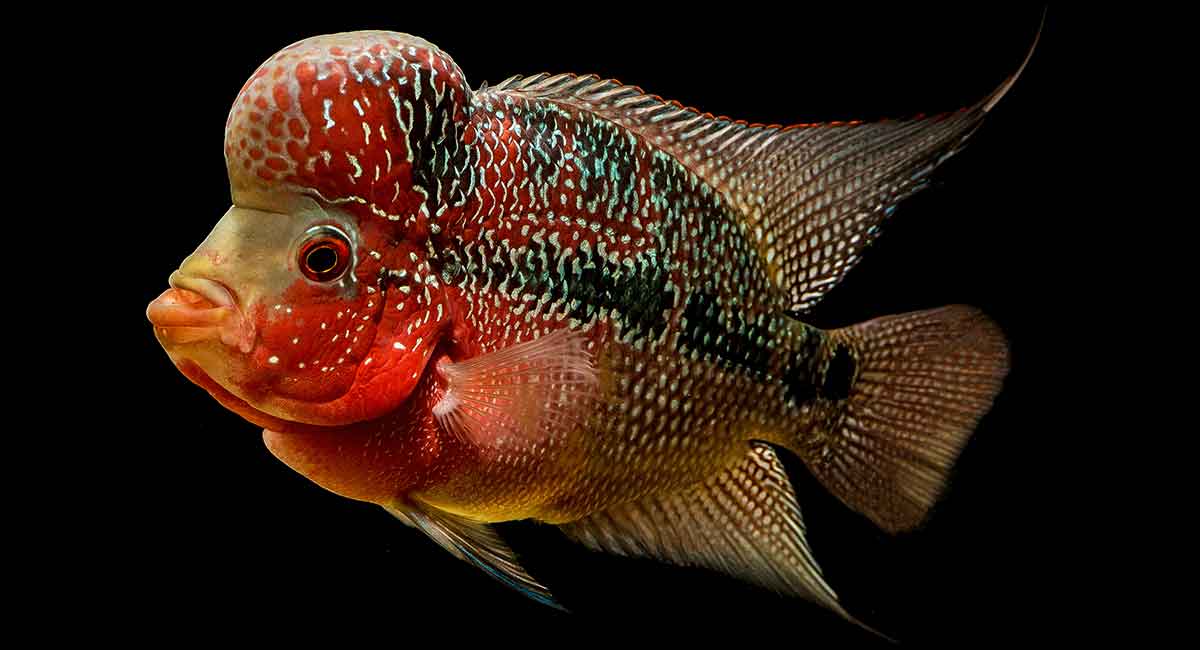 Flowerhorn fish are brightly colored cichlids with a distinctive bulge called a nuchal hump on top of their heads.

They were created in captivity by crossbreeding other cichlids and make entertaining underwater pets.

But it takes care and preparation to help a Flowerhorn fish achieve the 12-year lifespan it is capable of.

In recent years there has been increasing interest in the Flowerhorn fish.

Its distinctive appearance, most notably the huge bulge on the top of its head, is usually either loved or loathed at first sight.

However, there is more to the controversy surrounding this fish than just its bulbous head and flashy markings.

Let’s dive in and find out just what all the fuss is about regarding the Flowerhorn fish.

Where Does the Flowerhorn Fish Come From?

You might be surprised to find out that the Flowerhorn fish is actually a man-made hybrid.

It has only been around since the mid 1990s.

These fish are from the cichlid family.

Cichlids have long been popular among fish keepers, as they are known to be alert, active, and colorful.

The exact origins of the Flowerhorn ventures into the stuff of legends, according to some sources, as they suspect the exact bloodlines are a tightly guarded secret.

While it is not 100% clear what crossbreeding took place to create the Flowerhorn, it is widely thought that it involved the Blood Parrot Cichlid, along with some other types.

The Blood Parrot Cichlid itself is also a hybrid, having come about in the mid 1980s.

They are known for their abnormally shaped back and are sometimes described as resembling a love heart.

Fun Facts About the Flowerhorn Fish

The Flowerhorn’s popularity reached a peak in the early 2000s, especially in South East Asia.

The ‘kok,’ or large bulge on the head, is a feature certain fish enthusiasts greatly prize.

These fish even started to be seen as a kind of good luck charm in the region.

Some particularly flashy looking Flowerhorn fish can be worth many thousands of dollars.

The nuchal hump, or kok, can vary in size.

Genetics play a part in how big the hump will be.

Though the general health and well-being of the fish itself will influence the size of both the fish and the nuchal hump.

Male fish will develop a larger hump than females, so it appears that sex recognition may also be a reason some fish have this physical characteristic.

These fish have a wide array of colors and striking patterns which cover their body.

Colors range from reds and oranges to blues, with a mix of patterns.

Some have distinctive black patterning, others with white, some with both.

Despite being a relatively new breed of fish, there are already different varieties of Flowerhorn available, which display specific markings.

At times, people inject fish with substances to enhance their coloring.

This only temporarily enhances the color of the fish and can put its health in danger.

It is worth asking the seller whether the color you are looking at has been enhanced in this way.

You can expect one of these fish to live from 10–12 years if cared for properly.

They engage in activities normally as other cichlids do and do not appear to suffer any distress in carrying out regular “fishy” tasks as a result of their deliberate breeding.

Granted, it is hard to state emphatically whether these fish are prone to be unhealthy or not.

They have not been around long enough for many in depth studies to take place.

A study published in 2008 examined a Flowerhorn that had lymphoma, and it was concluded that this disease occurred spontaneously.

Usually, lymphoma in fish is the result of environmental factors.

This has led some scientists to speculate whether these fish may suffer a higher rate of cancer than others.

Fish are susceptible to certain parasites, so feeding them a high quality diet, keeping them as stress free as possible, and being wary of any other fish they come into contact with will go a long way to keeping them free of parasitic infections.

Perhaps of more concern than the health of Flowerhorn fish themselves is the impact they could have on the environment.

Sadly, either due to disinterest from the owner, oversupply, or deformity, some of these fish have been discarded into the wild.

These fish are aggressive and eat smaller fish.

They also display very good parenting skills, meaning they have a high survival rate when they breed.

The impact on native fish stocks they have had and will have in the future is a cause of concern among scientists.

Tank Setup for a Flowerhorn Fish

As these fish can grow up to 16 inches, it is important that their tank is big enough for them.

Generally, the very minimum size tank for one of these fish would be around 55–60 gallons, but 70+ gallons would be better if you have the room.

Remember that you will need to purchase a filter that can handle this amount of water.

A good filter is very important for these fish, as they are carnivorous, and messy eaters, at that.

Change the water in the tank bi-weekly.

And the level of nitrites in the water needs to be monitored carefully.

These are aggressive fish. So, keep Flowerhorns in a tank alone.

We will talk more about that later in the article.

So considering this, there are a couple of things you need to keep in mind when setting up their tank.

Flowerhorns enjoy a bit of “redecorating.”

They love digging in the gravel and will move it around considerably.

Do not be surprised if rocks that are light enough are also shifted.

They will undo any hard work you may have put into carefully setting up an aesthetically pleasing tank.

But more importantly, the safety of your Flowerhorn must be kept in mind.

Be sure that rocks and gravel are not sharp enough to injure the fish as they move them around.

Also be careful that rocks cannot topple over and crush or trap the fish.

If you decide to put some plants in with your Flowerhorn, know that it is common for them to eat plants that are in their tank.

If you are still keen on including plants, give them a trial run.

Some fish will be less interested in eating the plants than others.

So it is really down to the preferences of your particular Flowerhorn.

Flowerhorns are carnivores, but it is important to feed them a variety of food types.

They benefit from eating a mix of flakes, pellets, fresh, live, and frozen foods.

They will do best if a good portion of their diet is live.

This could be in the form of earthworms or crickets.

Some Flowerhorn keepers will feed them smaller live fish.

Keep in mind that other fish may carry parasites.

Flowerhorns are big eaters, and they will need to be fed around three times a day.

Make sure their diet is high quality, with plenty of vitamins.

Not only will this benefit the health of the fish, but the quality of a Flowerhorn’s diet will also affect their appearance.

Can Flowerhorn Fish Live with Other Fish?

As we have mentioned briefly, these fish live alone best.

They are very aggressive and territorial by nature and will eat smaller fish.

They will also attack fish of a similar size.

More often than not, the Flowerhorn will come out on top.

Some fishkeepers claim that they keep these fish successfully with other fish.

This is probably best left to very experienced fishkeepers. They have the right setup and understand which fish to keep with the Flowerhorn.

Is a Flowerhorn Fish Right for Me?

If you are thinking of getting a Flowerhorn Fish, make sure you check out our guide to choosing the best name!

These fish are somewhat polarizing. They have their fans and their detractors.

If you fall into the fan category, it is important to be aware that these are not low-maintenance fish that you can pop into a tank with other creatures.

They are sensitive and aggressive toward other fish.

They also require that you feed them a high-quality diet, preferably with an element of live food, which could make you squeamish if this is your first fish!

Depending on the age and appearance of the fish, a Flowerhorn could set you back a considerable amount.

Buying the right size tank, filter, and food will also require you have a sufficient budget.

All in all, these can be fascinating fish.

But they are also large fish with an even larger attitude. So remember this before you get one.

Be sure to let us know if you have a Flowerhorn in the comments below.

If you’re planning on getting a Flowerhorn fish, make sure you also choose a cool name to match him! 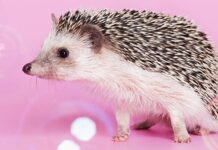 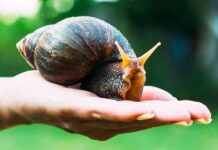 Giant African Land Snail – Can You Keep This Mighty Mollusc As A Pet?

Pet Snail – Are Snails Easy And Interesting Pets To Keep?

Your Pregnant Hamster – How To Care For Her During Pregnancy...

Why Do Rabbits Bite Their Fur Off?

Why Do Rabbits Bury Their Babies?