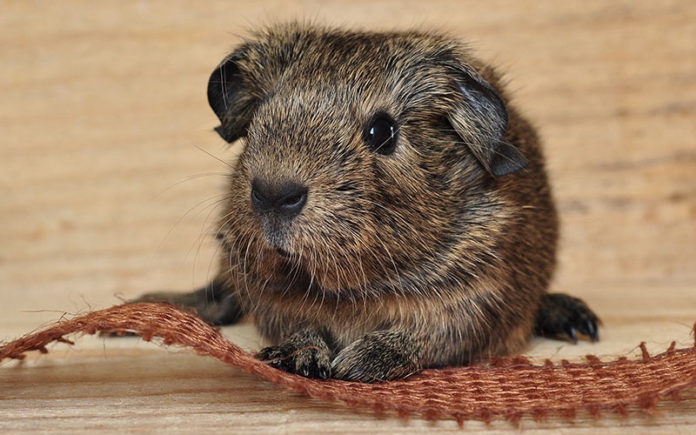 Want to find out more about the best pets in the world? Then check out our top 50 fun facts about guinea pigs!

Guinea pigs make great pets due to their kind, friendly natures. Not to mention being low maintenance and totally adorable.

But guinea pigs are not just cute and cuddly.

They enjoy a fascinating history along with unique characteristics and features.

Here you can discover 50 fun facts about guinea pigs that will totally amaze you!

Have you ever wondered where guinea pigs came from or how they got their strange name? 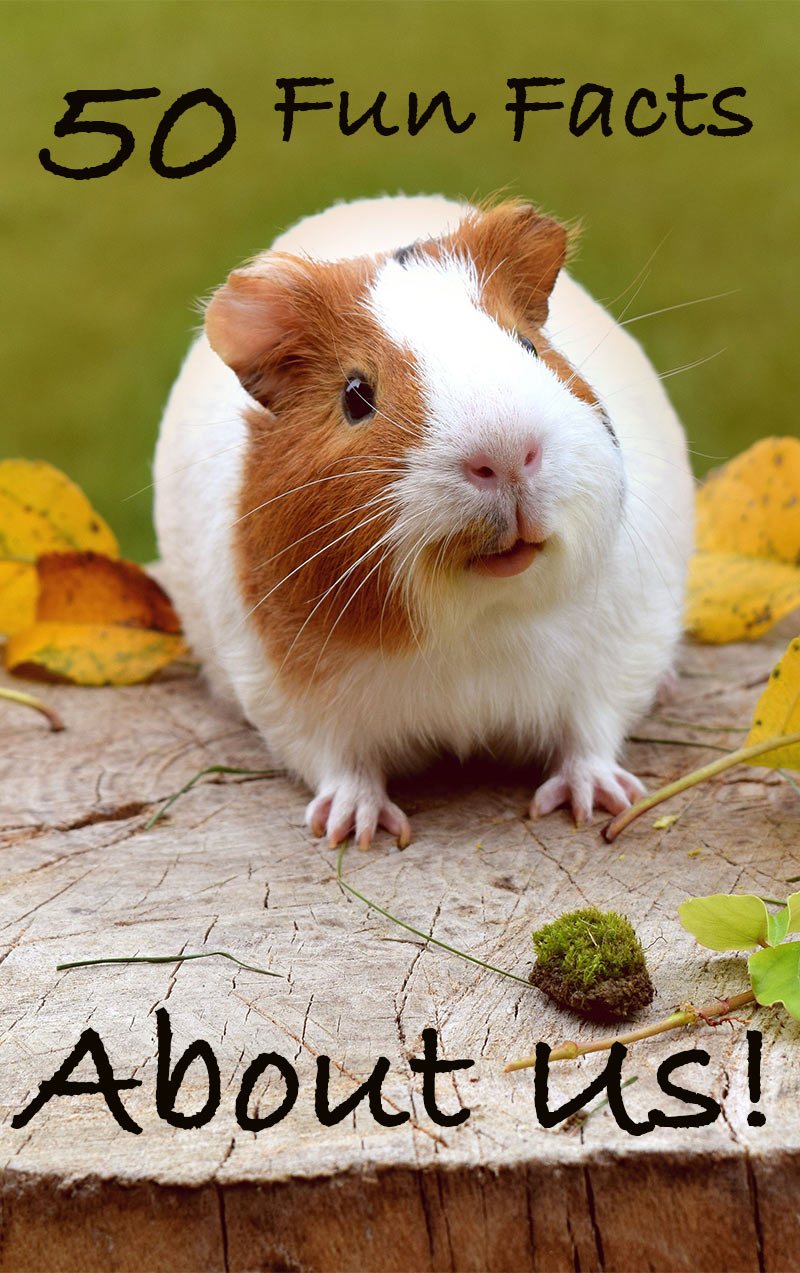 Read on to find out and learn 50 fun facts about guinea pigs!

One
Originally from the Andes, guinea pigs were domesticated as far back as 5000 B.C. by the Incas, as a source of food in South America.

It is uncertain where the name “guinea” came from, as they are not from Guinea. There are, however, several theories including:

They are not related to pigs but are rodents. They are, though, like a small pig with a large head, stout neck, rounded rump and no tail, plus they squeal like one!

They are often known as ‘cavies’ from their scientific name of Cavia Porcellus, which is Latin for ‘little pig’.

A male is called a boar; females are sows and babies are referred to as pups.

Guinea pigs grow until they are fourteen months old and measure between 20 to 30 cm long and weigh about one kg.

Guinea pigs have fourteen toes – four in the front and three at the back.

That’s quite a lot of claws to clip!

Guinea pigs have a high body temperature ranging from 99 to 103° F, so cannot cope with hot environments and can quickly overheat.

All breeds of guinea pigs have five different types of hair that make up their coat.

Guinea pigs are excellent swimmers, but will only swim if necessary as most dislike the water.

The average lifespan of a guinea pig is between five and eight years old. The world’s oldest guinea pig was called Snowball from Nottinghamshire in England. He was age 14 years and 10.5 months when he died in February 1979.

Next in our list of 50 fun facts about guinea pigs, let’s look at some cute guinea pig facts for kids! 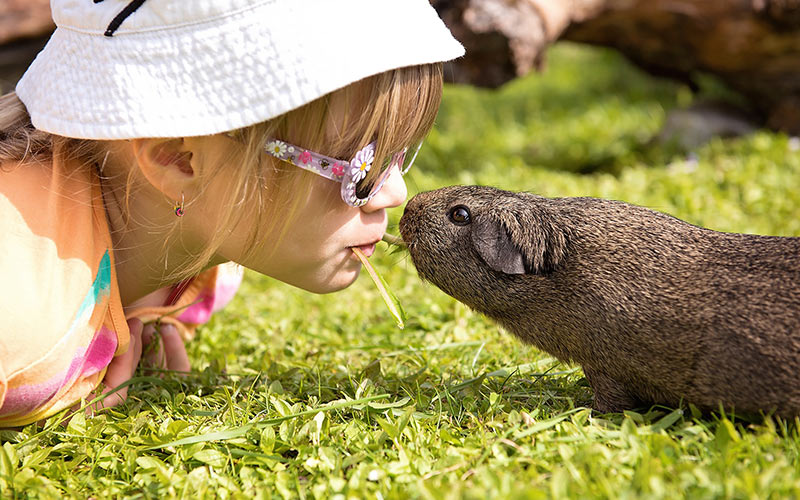 In 2012, a guinea pig named Truffles leapt into the record books for the world’s longest jump by clearing 30cm in Scotland. He beat the record holder, Diesel, by more than 9cm! His jump measured 20.5cm in 2009.

The world’s fastest guinea pig is the aptly named, Flash, who outran nine other cavies, clocking an impressive time of 8.81 seconds over 10 meters (32.81 feet) in 2009.

A guinea pig named Puckel Martin, recorded the highest jump of 20cm on March 16, 2003, in Sweden.

Guinea pigs have a “happy dance” called popcorning, whereby they run backwards and forwards, then leap into the air kicking their legs out!

The guinea pig resembles a popcorn leaping out of a pan, hence the name. Other names include pronking and pogoing.

Guinea pigs are extremely vocal and have a broad range of sounds which include purring, whining, shrieking, cooing, rumbling, hissing and teeth chattering.

These are all indications as to how it is feeling.

Guinea pigs only sleep for about four hours during a 24- hour period and usually nap from between 20 seconds to six minutes.

They mostly sleep with their eyes open in case of predators.

Guinea pigs produce a white liquid from their eyes that they use to clean themselves – it is like their very own body wash!

Imagine having a pet guinea pig that was ten feet long, five feet high had eight-inch teeth and weighed a tonne!

Scientists have discovered fossils from 8 million years ago, of an ancestor of the guinea pig, Josephoartigasia monesi, that is considered the largest rodent ever.

But we’re not done yet! Here are even more fun facts about guinea pigs! 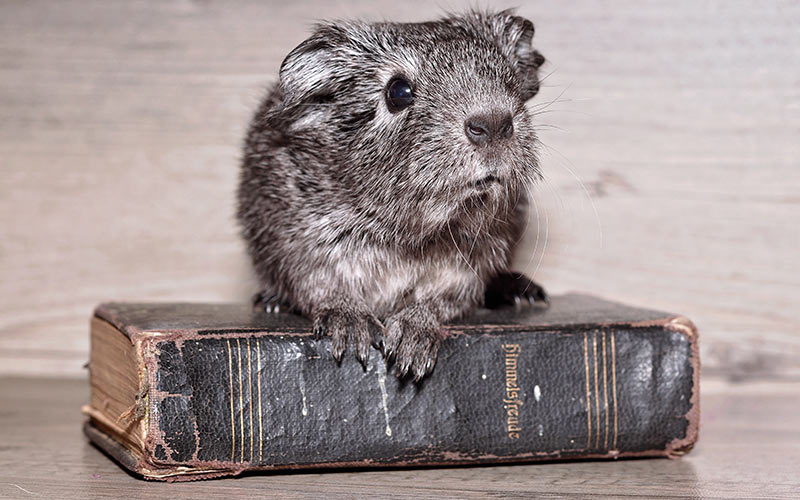 Guinea pigs have various names in different countries so probably suffer from an identity crisis! These include:

Every year in Huacho, Peru, there is a guinea pig festival. The guinea pigs are dressed up in cute little Peruvian outfits, with a prize for the best dressed.

The guinea pigs are pampered all day and given a big feast……then cooked and eaten afterwards, where there is even a prize for the tastiest! Eek!

Around 65 million guinea pigs are eaten yearly in Peru.

Apparently, the taste is a cross between a rabbit and dark chicken meat and tends to be tough and stringy.

However, it is a healthy meat as it is low in fat and high in protein. Crucially, it also an affordable, sustainable, and environmentally friendly way for families to secure enough food.

Continuing the culinary theme…. The guinea pig is cooked complete and can be baked, fried or roasted…. And lots of people eat the whole animal, from head to toe!

Guinea pigs are herd animals so should always be kept with at least one other. In Switzerland, it is illegal to own just one, and they even have a rent-a-guinea-pig service should one of your beloved pets pass away and a companion is needed!

Diana, Princess of Wales, once won a prize for “best-kept guinea pig” at school for her pet, Peanuts, and the Duchess of Cambridge, Kate Middleton, revealed how she and her sister, Pippa, were nicknamed Pip and Squeak at school, after the pet guinea pigs!

In Japan, there is an online store called Guinea Pig Fashion that produces stylish clothes and accessories for cavies.

They have everything from tank tops, hats, dresses, tiaras, tuxedos, wedding gowns and hair extensions!

Guinea pig internet sensation, Fuzzberta, had 168,000 followers on Instagram! She was famous for modelling outfits made by the owner, Monica Lu.

Continuing along the road to 50 fun facts about guinea pigs – we have some really interesting guinea pig facts.

Studies reveal that children with autism have a noticeable reduction in stress levels when interacting with guinea pigs.

Queen Elizabeth, I, owned a guinea pig and helped promote the species as a pet in Great Britain.

Guinea pigs have twenty teeth, which are “open-rooted,” meaning they continuously grow.

The hay in their diet is vital for grinding their teeth down so they don’t get overly long.

They can also be given wooden blocks to chew on.

Guinea pigs have white teeth, unlike other rodents which have yellow teeth.

There are three categories of guinea pigs – long-haired, short-haired and hairless.

Baby guinea pigs can open their eyes while still in their mother’s womb, 14 days before they are born.

Pups are born with their eyes open, have all their fur, can drink from a water bottle, eat hay and run at just a few hours old!

By three weeks old, you should wean young guinea pigs, as males can impregnate a female, who can become pregnant at four weeks old.

The next step in our favorite 50 fun facts about guinea pigs? Guinea pig breeding facts!

When a male guinea pig is trying to court a female, he will do what is called “rumble strutting.”

He will make a “rumble” sound while “strutting” his hips and have raised or puffy hair.

A female guinea pig who has no interest in the male’s attempt to woo her will squirt a jet of urine at him!

A female guinea pig is pregnant for between 59 and 72 days.

The average litter size for a guinea pig is about two to four pups. The largest litter recorded was 17.

After the age of eight months, it is dangerous for a female guinea pig to become pregnant for the first time, as the pelvic bones fuse together. As a result, she will be unable to deliver normally and require a caesarean section.

Our gorgeous guinea pigs are very much domesticated. 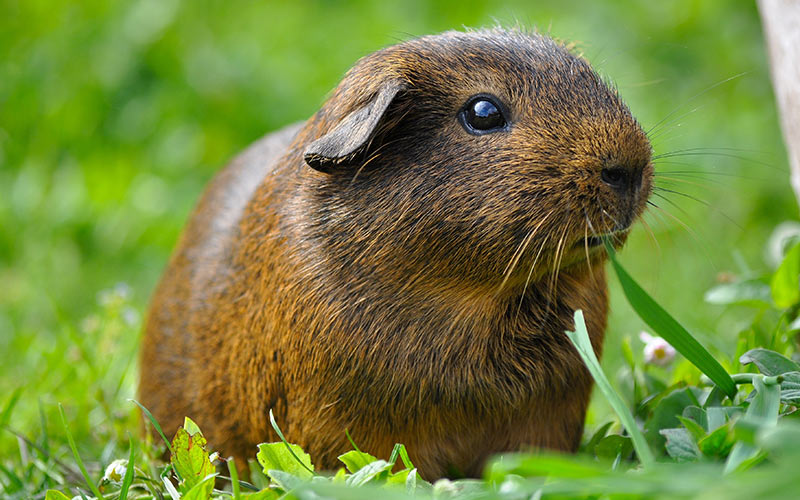 But did you know they have some fascinating wild ancestors?

Domestic guinea pigs are no longer in the wild, but there are other guinea pigs found in rocky areas, grassland and forests in South America.

These species include the Brazilian guinea pig, the shiny guinea pig and the Montane guinea pig. The guinea pig known as Moleques do Sul, is a critically endangered species, with less than 60 remaining.

Wild guinea pigs live in groups of between five and ten and inhabit burrows made by other animals to protect themselves from predators.

Feeding your guinea pig the right diet is essential. Next to come in our 50 fun facts about guinea pigs are some great diet tips.

Guinea pigs are grazing animals so will eat regularly throughout the day. Their diet should consist of grass, hay, pellets and vegetables.

Like us, they cannot produce vitamin c, so fruit and vegetables should be given or a supplement.

Don’t be concerned if your pet cavy eats his poop! It is perfectly natural and contains vitamins B and K, essential for good health.

For thousands of years and even today, guinea pigs assist in the healing of the sick in the Andes. The guinea pig is rubbed all over the body of the patient and will squeal at the affected area.

Since the 1800s, guinea pigs were experimental animals, used for medical research. Scientists discovered guinea pigs had biological similarities to humans which lead to the discovery of vaccines for diseases such as diphtheria.

The term “guinea pig” (meaning a person or animal used as an experimental subject) came from the extensive experimenting on guinea pigs and initially coined by George Bernard Shaw.