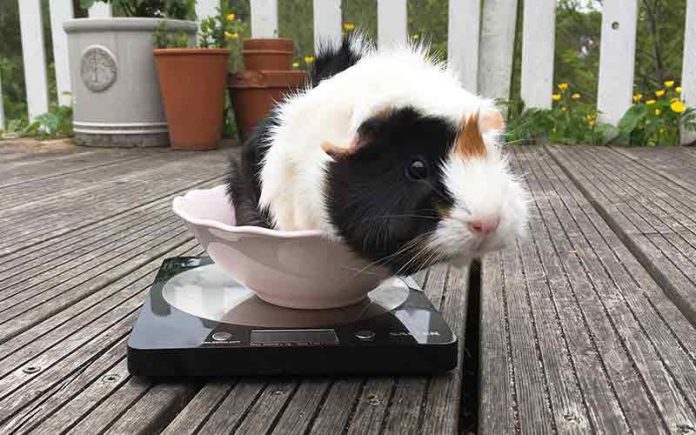 Guinea pigs’ roundness is integral to their appeal. They’re supposed to be a funny little oval shape, and it’s one of their cutest features.

But when your pet is designed to be rotund, how do you tell when they’re carrying too much weight?

Maintaining a healthy weight is just as important for your guinea pig’s health as it is to yours or mine.

So, how much should a guinea pig weigh?

Guinea pig pups weigh around 100g at birth, and reach their adult weight by around eight months old.

Whether you bring your guinea pig home from a breeder as soon as they’re ready to leave mum, or choose them in a pet store when they’re a bit older, it’s a good idea to keep tracking their growth when you bring them home.

In fact, many animal welfare charities recommend weighing your guinea pig every week! 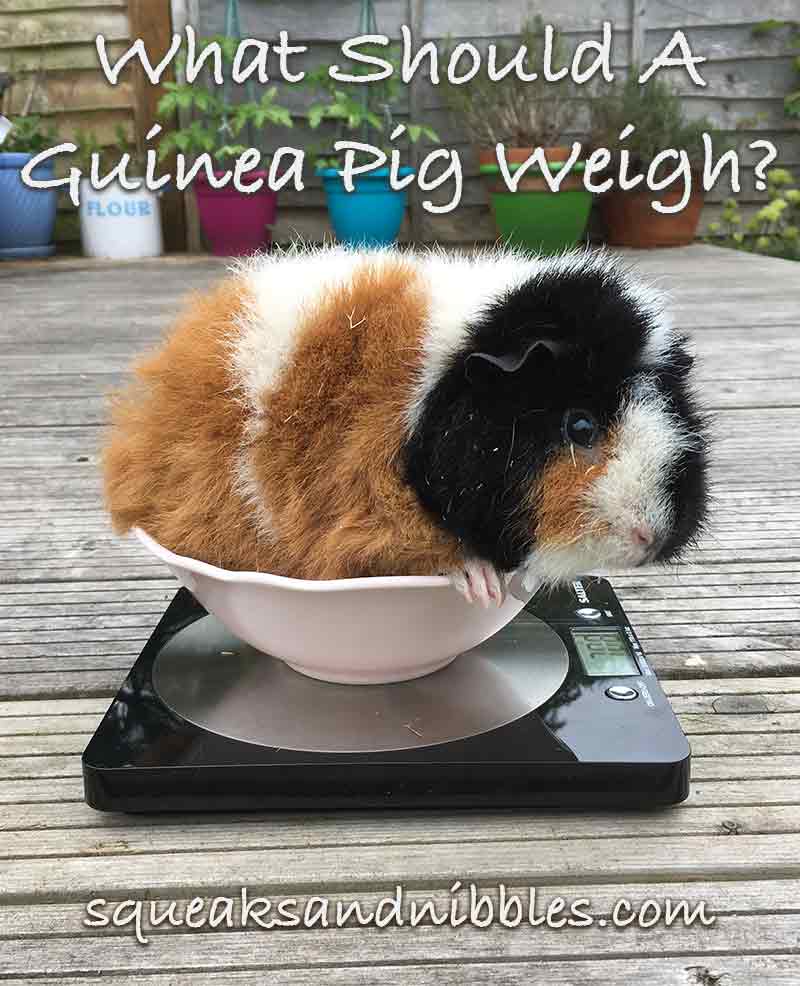 Why should I care so much about the weight of a guinea pig?

For many prey animals, a key strategy for not drawing the attention of predators is not showing when you’re in a weakened state, making you an easy catch.

So, guinea pigs don’t tend to let on when they’re in pain.

This means that when they’re injured or sick, it can take us a while to realize.

To overcome this, there are lots of checks we are accustomed to checking whenever we handle our pigs: we check their eyes, ears, nails, teeth, and the general condition of their coat and skin.

Weighing guinea pigs is another valuable way to increase your chances of spotting health problems early on.

Sure it takes a little more effort, because it involves actual equipment besides our hands and eyes. But a poorly guinea pig may lose weight weight rapidly, so it’s definitely worth it.

The easiest way to weigh a guinea pig is on kitchen scales.

Digital or mechanical scales are both fine (but if you’ve never tried digital scales, trust me, you will never look back). 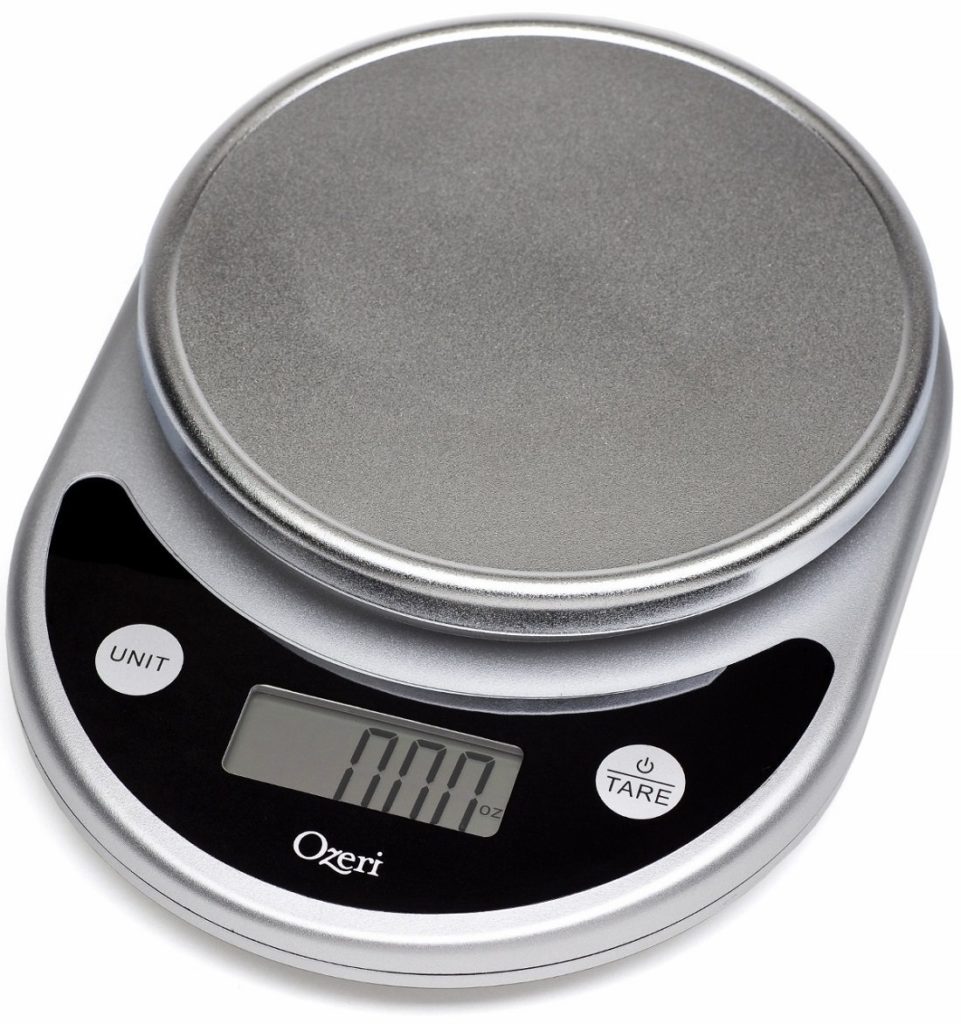 You’ll also need a bowl heavy enough that your pig can’t tip themselves off the scales, but not so heavy that adding the guinea pig tips the scale beyond its range.

Weigh your guinea pig at ground level, so that if they do tip the bowl they can’t also fall from a table or work surface.

If your guinea pig finds being handled or weighed stressful, and they have a bed box which is closed on five sides, try putting whole bed box on the scale, then resetting the scale to zero.

Gently remove the guinea pigs back to their hutch, and their weight will appear as a negative figure on the scales.

Part of working out the healthy weight for your guinea pig is getting into a routine of checking their weight regularly, so you can tell when it’s gone up or down.

Find whatever routine for weighing your guinea pig works for you.

If you find you keeping forgetting, try setting a reminder on your phone, or get into the habit of weighing them whenever you trim their nails.

What is a healthy guinea pig weight?

Just like people and other animals, guinea pigs come in different shapes and sizes.

The healthy weight for your guinea pig is the weight that corresponds with a healthy body shape.

To help you judge whether your guinea pig is a healthy weight, the Royal Society for the Prevention of Cruelty to Animals recommends using this Guinea Pig Size-O-Meter.

The Size-O-Meter is a guinea pig weight chart with emphasis on handling your guinea pig and assessing whether their body shape is healthy, rather than dwelling on what the scales say.

How much should my guinea pig weigh?

Provided they have a clean bill of health, they’re eating the right things, and they’ve got the right body shape, then weighing them several times around their first birthday will give you an idea of the right weight for your guinea pig.

Once you have a good idea what that weight is, checking for gains and losses is a helpful insight into the health of your guinea pig.

What is the average weight of a guinea pig?

But how much should a guinea pig weigh if she is the average guinea pig?

Naturally, when weights fall within a range, they tend to cluster in the middle of that range, so in fact the majority of guinea pigs are between 700g and 1,200g, or 1.5 – 2.6lb.

If your guinea pig’s weight falls at the very top or bottom of the expected range, even if they seem healthy, please consider asking a vet to check them over in case they have any underlying health problems.

So let’s say I’ve convinced you to check your guinea pig’s weight every week.

But you’ve noticed their weight fluctuates every time. One week they’re 950g, the next they’re 970g, and the week after that is seems to plummet to 940g.

When is a guinea pig losing or gaining weight a cause for concern?

If you weigh your guinea pig just after they’ve had a good meal, or been to the toilet, you’re bound to notice a bit of variation.

As a rule of thumb, fluctuations of around 5% aren’t cause for alarm.

But I would be asking myself:

If I answered yes you either of the second two questions, I’d call my veterinary surgery and ask their advice on whether to come in.

If not, I’d make a mental note to weigh my guinea pig again in a couple of days’ time.

My guinea pig is losing weight

If your guinea pig continues to lose weight over several days, or loses more than 10% of their normal weight, then it’s definitely time to arrange for your vet to see them.

Even brief loss of appetite can have serious consequences for a guinea pig.

We’ll come back to why in minute.

Why is my guinea pig losing weight?

Lots of things can cause your guinea pig to lose weight.

In this article on loss of appetite in guinea pigs, Pet MD lists the following possible causes:

Even if you think you can pinpoint the cause of your guinea pig’s weight loss, bear in mind loss of appetite and loss of weight are symptoms of many health problems, so only your vet should make a diagnosis for your pet and decide the best course of treatment.

Is your guinea pig overweight?

Being overweight can be just as dangerous as for your guinea pig as being underweight.

Giving our guinea pigs treats is a fun way to to get a cute reaction out of them, and build a bond. But sometimes it’s easy to overindulge our pets and let them get overweight – and it happens to the best of us.

Unfortunately, a fat guinea pig is not a healthy guinea pig for several reasons.

The risks of being an overweight guinea pig

Carrying too much weight puts strain on guinea pigs’ hearts, liver and joints.

It can also cause diabetes, breathing difficulties, and some cancers.

Being overweight in summer makes it hard to regulate their temperature in hot weather too.

The good news is, with some careful changes, you can always help your guinea pig get back to a healthy weight.

Never make any sudden changes to your guinea pig’s diet to try and make them lose weight.

Guinea pigs have a suicidal tendency to just stop eating when sudden changes are made to their diet.

So, phase in changes gradually, and don’t eliminate anything they have become accustomed to overnight.

Now back to business…

Always consult your vet before putting your guinea pig on a diet.

They will want to ask you lots of questions about what your guinea pig is currently eating, and it’s natural to feel a bit defensive when we’re told we’ve been getting it wrong. But just concentrate on the changes to be made to move forward.

Many vets advise against feeding muesli these days, because guinea pigs tend to pick out the sugary bits leave important roughage behind. Remember that you need to change from muesli to a high quality pellet, to do so gradually.

They might also recommend swapping store-bought snacks for a wider variety of vegetables.

Unfortunately, the treats sold in pet stores are rarely healthy, so when you want to give your guinea pig a treat, do it by mixing up the fresh component of their diet or throwing in a herb they haven’t tried before.

Exercise also has an important role to play in keeping your guinea pig the right size, so make sure they have plenty of space and opportunity to run around.

Bear in mind they tend towards being crepuscular, which means they’re most active at dawn and dusk. Try to put them in their outdoor run at these times, rather than in the middle of the day when they’ll be more inclined to rest than take advantage of the space.

As your guinea pig slims down, they’ll get healthier, happier, and hopefully even live longer too!

How much does a guinea pig weigh?

So, how much should a guinea pig weigh?

When you bring a new pig home, focus on making sure they are a healthy size using the Guinea Pig Size-O-Meter.

Try and getting into a routine of weighing your guinea pig regularly to find out how much they weigh at their healthy size.

One day having this information might help you recognize when your pig needs urgent veterinary help.

How much does your guinea pig weigh?

Once you’ve put your guinea pig on the scales, tell us what they weighed in at using the comments section below! 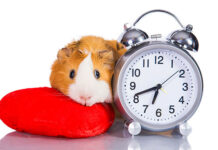 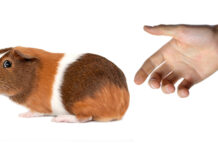 Why Is My Guinea Pig Scared Of Me? 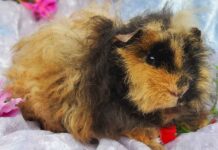 Why Is My Guinea Pig Scared Of Me?

My New Guinea Pig Is Scared!

Why Do Guinea Pigs Chatter Their Teeth?

Why Do Rabbits Scratch The Ground?