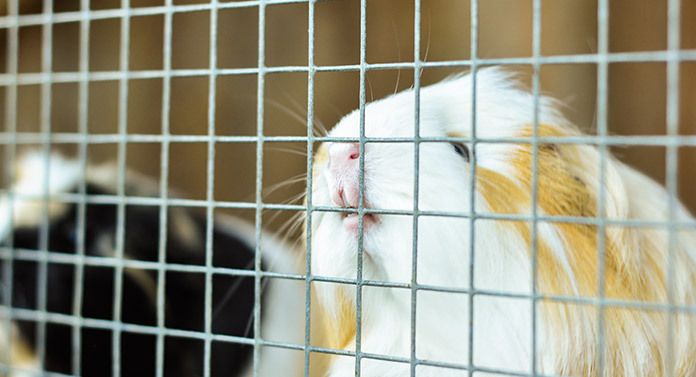 Working out how to stop guinea pigs chewing on cage bars can be a big deal for their owners. Especially when they share their home.

Not only is the noise of teeth on metal annoying, it can be disruptive to your sleep too if their cage is near to your bedroom.

But fortunately there are several things you can do to stop them.

Why do guinea pigs chew?

Guinea pigs are rodents, and as such their teeth are constantly growing.

Throughout their lives they need to work hard to keep them at a level that is not going to cause them issues.

Rescue guinea pigs that have not had enough chewing opportunities sometimes have to have their teeth clipped, just as you would with overgrown nails.

Leaving them too long can be damaging to their mouths, and ultimately even fatal if they become infected or prevent them from eating.

So chewing is really important to guinea pigs, for their health.

The first line of defence against this excessive tooth grow is their food.

What all these foods have in common is that they are hard, and when the guinea pig bites down on them it helps to wear down their teeth. 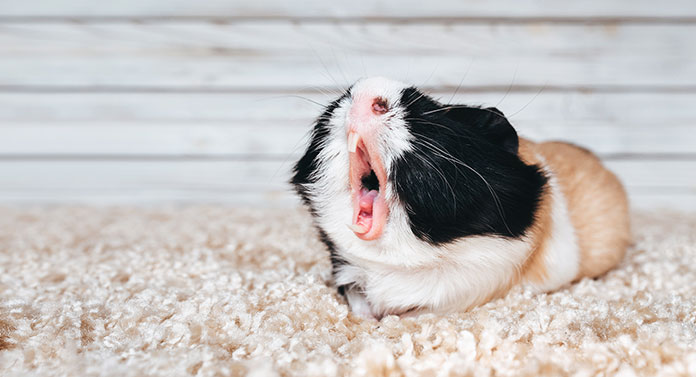 If your guinea pig is only being given soft foods like grasses, leaves and fruits then their teeth won’t wear down like they should.

However, guinea pig pellets alone won’t stop them from looking for other chewing options.

Why do guinea pigs chew on cage bars

There are a few very common reasons that guinea pigs will start chewing on their cage bars:

How to stop guinea pigs chewing on cage bars

To discourage your guinea pig from using their bars as a chew toy, you need to make sure that there is no reason for them to do so.

Your options include one or more of the following:

Although guinea pigs are social creatures, they aren’t fans of sharing.

If you have two guinea pigs, I recommend having at least three chew toys in their house.

Three guinea pigs, at least four. And so on. 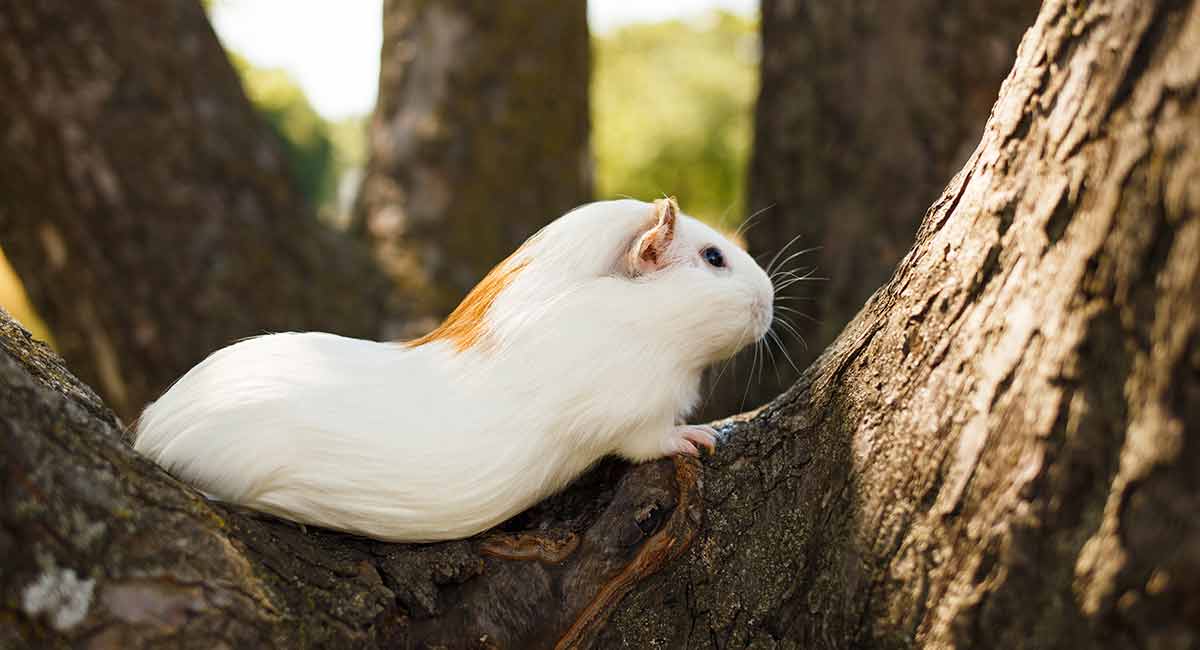 They need to have the option of one each, and another default for the inevitable one that gets ignored!

Guinea pigs like to chew on a variety of textures and materials.

You might have some great softer chew toys, like those made of hay or wicker, but what your guinea pig wants is something wider and harder to get their teeth into.

Having a range of toys of different hardnesses, textures, strengths and sizes will give you the best chance of having something that meets your pet’s current desires.

Spread out meals through the day

If you pop them in a run on the lawn they will spend much of the day happily munching away.

When we feed them their pelleted food, this is often done in one big drop once a day.

They plough through and no more food is forthcoming until the next day.

But if you spread the same amount of food throughout the day it will distract them for longer.

Give a more varied diet

Variety is the spice of life, guinea pigs would agree.

It’s vital that your guinea pigs have access to hay as well as their nuggets, but they also appreciate a range of fruits and vegetables. 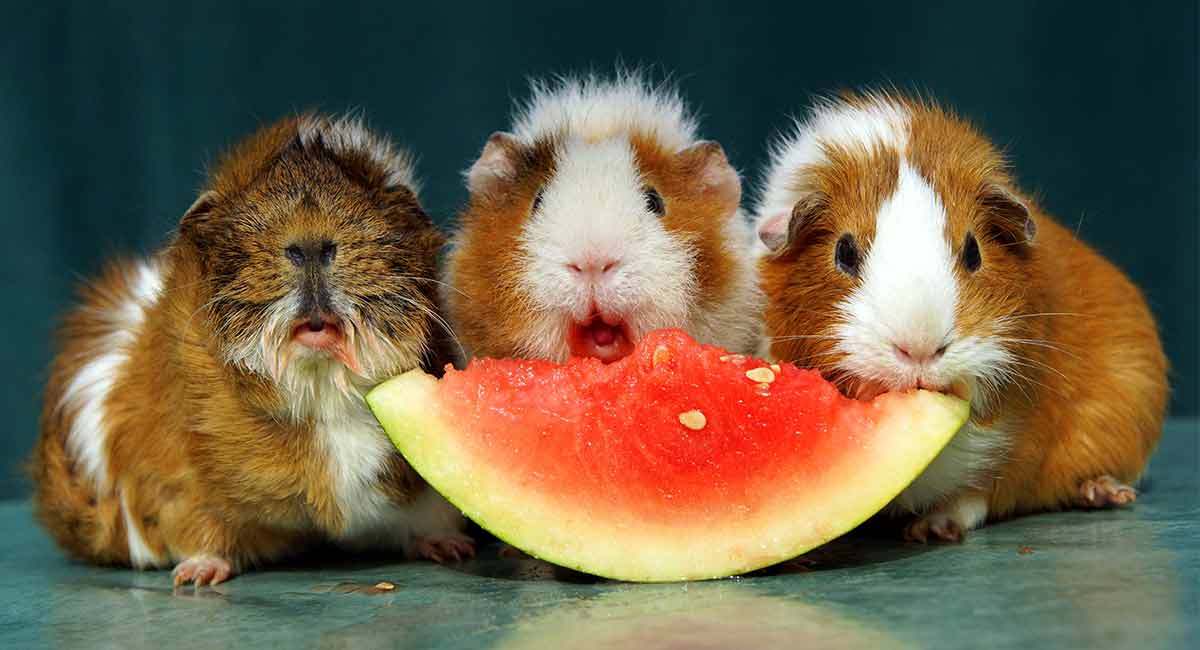 Chopping up a bunch of carrots, cauliflower, cucumber and peppers for them to work their way through will help to keep your little friends distracted and happier for longer.

Get a bigger cage

As small rodents owners sometimes mistakenly put guinea pigs into a much smaller cage than they need.

When you keep rodents in cramped quarters they will often chew the bars, either in an (ultimately doomed to fail) attempt to escape, or out of stress.

Another common cause of stress is fighting, which again is more likely when they are in a small space together.

Make sure they are not unhappy with their companions

Most animals will carry out basic tasks that their body needs them to do, as a way of avoiding or dealing with stress.

It’s like when we chew our nails when we are under a lot of pressure.

This action is carried out not because chewing our nails is particularly pleasurable, it’s what is called a displacement activity. 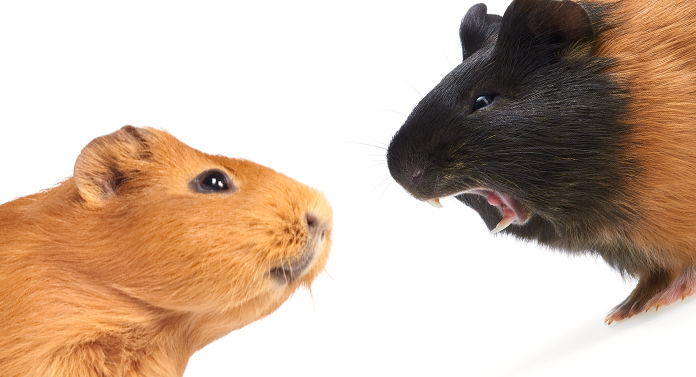 A thing your body does to distract from the source of your worry, to give you something else to focus on.

One of the major sources of stress for guinea pigs is fighting with their companions.

To help your pets get along try to give them:

How to stop guinea pigs chewing on cage bars

Guinea pigs chew on their cage bars because they are stressed, or because their chewing needs aren’t being fulfilled in other ways.

To help break the habit, make sure that they are happy in their homes and provide lots of other outlets for their chewing behaviors to be focussed on.