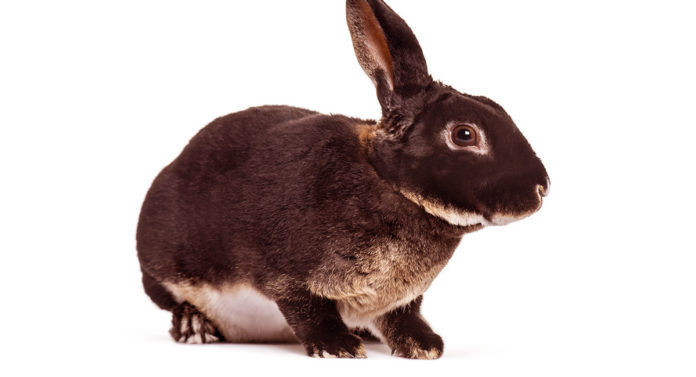 They usually belong to the Rex or Mini Rex breed.

What is a Black Otter Rex Rabbit?

Black otter rex rabbits aren’t a breed in their own right.

Black, otter, and rex are all adjectives. They describe coat color, pattern and texture respectively.

To best understand how they shape the appearance of a rabbit, it actually helps to look at them in reverse order:

The word rex describes a type of coat. It’s also used as part of some breed names, when those breeds are defined by having rex coats.

Several animal species, including rabbits, cats, hamsters and rats can have rex coats, which are caused by the rex gene mutation.

Rex coats are curly. The curls can be undulating waves, like the fur of the Selkirk Rex cat, or they can be tightly crimped.

On rabbits, rex coats are tightly crimped and springy. Each strand stands out perpendicular to the skin, and the overall texture is soft and plush.

Rabbit breeds with rex coats include the Rex and the Mini Rex.

Otter markings are a distinctive pattern of dark and light markings on pet rabbits. They are caused by a specific gene called Tan (otter), or at.

Rabbits with otter markings have a dark color over their head and back. On each strand of hair, the pigment is separated into two bands – a dark one near the tip, and one a lighter one near the root.

They have a lighter color under their chin and belly. These strands of fur are also two-tone, but this time the lightest band of color is near the tip, and a second, darker band of color sits next to the skin.

Otter rabbits also have lighter fur around their eyes, inside their ears, and in a triangle at the nape of their neck.

Finally, wherever the dark and light areas of fur meet, there should be a distinct boundary of contrast colored hairs.

Last but not least, otter markings can be black, blue, chocolate or lilac. These names all refer to the darkest color, which covers the head and back.

Black otter markings are the most common, since the gene for black fur is dominant, and the genes for blue, chocolate and lilac are all recessive.

When the dark fur in an otter pattern is black, the light color is cream and the contrast color where they meet is tan.

But to some rabbit owners, they’re so much more special than just a list of adjectives!

Even though the black otter rex rabbit isn’t a breed in its own right, you’d be forgiven for thinking on first impressions that it is!

Rabbits matching this description are so popular that they have their own owners’ clubs in both the U.S. and the U.K.

They celebrate black otter rabbits of either the Rex, or Mini Rex breeds.

And commemorate the work of the man who developed them – a gentleman called Jock Hardwicke.

It was also Hardwicke who successfully championed for his new coloring to be accepted at breed shows.

Away from the show bench though, what kind of pets are black otter rex rabbits?

Black otter Rex and Mini Rex rabbits can be expected to have the same temperament as the rest of their Rex or Mini Rex brethren.

So far, there’s no evidence that coat color affects bunny temperament for either better or worse.

But rex coated rabbits have gained popularity as pets ever since the random mutation causing their plush coat first appeared in the early 20th century.

And now, following a century of selective breeding from the sweetest and friendliest does and bucks, modern Rexs and Mini Rexs are famed for their gentle disposition.

Rex does in particular are described as especially maternal and attentive to their human families and companion rabbits.

At the time of writing, there is no evidence that black otter rex rabbits are more vulnerable to disease than any other rabbits.

Even though rabbit breeders rely heavily on line breeding (mating closely related rabbits) to fix desirable characteristics like the black otter pattern, this doesn’t seem to have the same dramatic effect on health as it does for dogs and cats.

Just like other rabbits, black otter rex bunny owners need to be vigilant for:

Other Problems To Watch Out For

Rex rabbits are also prone to brittle toenails as a result of the same mutation which causes their crimped coats.

Good breeders should discontinue breeding lines where this is a problem. Even if only because they will be penalized on the show bench.

Finally, beware of Mini Rex breeders who have pursued an overly flat face shape in the name of “cuteness” – this is a leading cause of respiratory disease.

Black otter rex rabbits require the same care as all other rex rabbits, which in turn is not dissimilar to the care of other short haired rabbits.

Their coats are low maintenance, but check them daily (and twice daily in summer) for signs of injury, infection and flystrike.

Their habitat requires daily attention to clean out dirty corners, and they need unlimited access to clean hay and fresh water.

Your sociable black otter rex also needs another bunny to live with – rabbits are not well adapted to living alone, and the stress can cause physical as well as mental harm.

For more information on the day to day business of looking after rabbits, visit us here.

They’re not a breed in their own right, but a popular example of the Rex and Mini Rex breeds.

If you’re thinking of getting a pet rabbit, we think these handsome black otter rex rabbits are well worthy of your consideration!

Do You Already Have A Black Otter Rex Rabbit?

Had you been looking for this striking color specifically, or was it happy fate?

Tell us what kind of pet black otter rex rabbits have been to you in the comments box down below!