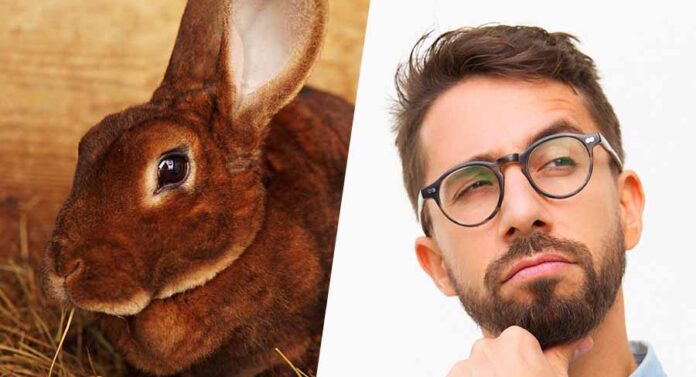 How big do Rex rabbits get? The Rex rabbit is a medium sized breed that generally won’t weigh more than 10.5 lbs when fully grown. The Mini Rex is even smaller, weighing 4.5 lbs at most when fully grown. Rex rabbit breeds usually take between 6 and 9 months to reach their adult size. But, make sure you’re giving them a well balanced, nutritious diet to help them grow and develop in the healthiest way possible!

How Big Do Rex Rabbits Get?

Rex bunnies are a popular breed, partly due to their wonderfully soft fur! A Rex rabbit will have a wonderful velvet texture to their fur, which comes in a huge spectrum of colors. They have relatively round bodies and long ears.

When fully grown, a Rex bunny is likely to weigh somewhere between 6 and 12 lbs. But, to fit with their breed standard, they must not weigh more than 10.5 lbs. Female bunnies tend to be at the lower end of this size scale, whereas males are often larger. So, Rex sizes can range from medium to large.

How Big Do Mini Rex Rabbits Get?

A large, or even a medium-sized rabbit won’t suit every home. Some owners may seek a bunny with the same popular traits as a standard Rex, but in a smaller package. And that’s where the Mini Rex comes in!

When Are Rex Rabbits Fully Grown?

Since females are often smaller than males in both varieties, they will often reach their adult size before males of the same type. So, female Mini Rex bunnies are usually the fastest to reach their adult weight and height.

Which Rex Bunny Size is the Best?

If you love the Rex bunny’s fur and temperament, you might be wondering which variety is right for you? The standard Rex will need more space and food than a Mini Rex. But, owners can be surprised by just how much space and care the Mini variety needs. Let’s take a closer look.

For all bunnies, the more space they have the better. Rabbits are social animals that are often happier when kept in pairs – so you usually won’t just be finding space for a single Rex bunny. Rabbits need enough space for sleeping, socializing, exercising, and more. All rabbits breeds are very active. They need enough space to run, hop, twist, and lie down. Many experts will recommend a minimum of 8 to 12 square feet for rabbits, with extra space for exercising and playing.

Mini Rex rabbits will need less space than standard Rex. But, both need a surprising amount of space to exercise and play. Without this, they can become distressed, unhappy, and physically unwell.

Both the standard and Mini Rex rabbit breeds need regular veterinary checks, the correct environment, and a balanced diet. They will need enrichment, such as interactive toys, and hiding spaces to help them feel safe.

Both need plenty of time dedicated to socializing. Many owners choose to get a second rabbit to help fulfil these social needs, but even with two bunnies, it’s important that owners spend plenty of time with them. This includes handling them and checking for common problems like injuries, parasites, and skin or dental issues.

Though the Mini Rex will need less food per meal than the standard variety, they will have equally high social needs. They may need less time dedicated to exercise each day, but will need similar amounts of space to remain happy. And, they will need the same regular veterinary checks and attention to their teeth and fur.

Both the standard and Mini Rex varieties will face common rabbit problems like dental issues, parasites, and skin issues. These problems are particularly prevalent for bunnies who are kept in inadequate conditions, or who are fed the wrong things.

Some Mini Rex rabbits have also been found to have urinary issues, so watch out for this if you have the smaller Rex variety. As prey animals, most rabbits try to hide any injuries or health issues. So, you should inspect your bunnies regularly.

Importance of Diet for Growing Rabbits

Providing your rabbit with a balanced and nutritious diet whilst they are growing is very important, whether they are a standard Rex bunny or a Mini Rex. All rabbits need a high fiber, low fat diet which is also low in starchy carbs. Not only will this diet help them grow healthily, but it will also help to keep their teeth ground down to an appropriate length.

Bunnies need plenty of fresh hay to eat, or fresh grass. It’s a good idea to offer them a variety of leafy greens, and many owners opt for pellets. Pellets are great because they’re guaranteed to have the correct balance of nutrients that your bunny needs. Achieving this balance is harder when you’re trying to compose their diet yourself.

You should introduce fresh hay to your bunny’s diet from an early age, as older rabbits can be quite fussy with new foods.

How Big Do Rex Rabbits Get?

Rex rabbits tend to grow to be medium or large bunnies. But, they also come in a smaller variety – the Mini Rex! So, there is a Rex size for everyone. Despite their size differences, both of these bunnies have similar care needs. Do you have a growing Rex bunny at home? How big are they so far? Let us know in the comments!