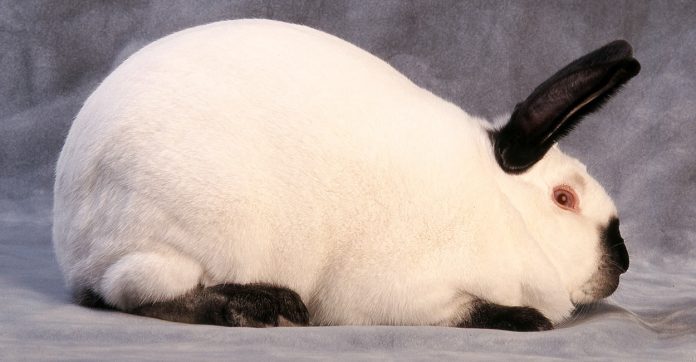 The Californian rabbit, also known as the California White, is sure to draw curious glances from visitors to your home when your bunnies are out nibbling on your lawn or reclining in their hutch!

But what’s so special about this breed of rabbit?

Do they make good pets?

How big do they get and how long do they live?

What Is A Californian Rabbit?

The Californian rabbit was reared in the 1920s in California, primarily to provide good quality meat and fur.

First, Himalayan rabbits were crossbred with standard Chinchilla rabbits. Their offspring was then crossed with New Zealand rabbits. The result was a large, well-fleshed rabbit with almost pure white fur.

These days, Californian bunnies are still reared for their meat in some countries.

Californian rabbits are also very popular as pets and show rabbits, where they are classed as a “fancy” breed, largely thanks to their lustrous, silky-soft coat and distinctive coloration.

The Californian rabbit is easy to spot in a crowd, thanks to the breed’s size and signature coloration.

Californians are white with very dark, chocolate brown “points” on the tail, ears, nose and feet.

On purebred Californian rabbits, the markings on the bunny’s nose continue on below the jaw line and upwards to the eyes. The points on the legs run upwards towards the rabbit’s body, sometimes making it appear as though the bunny is wearing stockings!

Californian’s ears are dark brown from base to tip. They are large and held erect, rather like those of their relatives, Flemish giant rabbits.

As a quirk of breeding, the Californian bunny’s eyes are a striking pink color just like those of an albino rabbit.

Californian bunnies are one of the larger breeds of rabbits.

A Californian rabbit’s weight can reach an average of between 7 lbs. and 12 lbs. Bucks (boys) are generally slightly smaller than does (girls).

Californian rabbits tend to be rounded and plump in shape with a good covering of muscle across their hindquarters.

One of the reasons that Californian rabbits are popular as pets is that they have a friendly, gentle nature.

Children should always be supervised when playing with rabbits, as bunny skin is delicate and is easily damaged by rough handling.

It’s important to remember that all bunnies are prey animals. When handling your Californian rabbits, be sure to hold them correctly so that they feel safe and comfortable and don’t struggle or become distressed.

Californian rabbits are intelligent, and with patience and time you can even teach your rabbits a few fun tricks!

Californian rabbits were bred to be healthy and robust. However, no matter how pampered they are, all pets can get sick sometimes!

If you know what health problems are most likely to affect your Californian rabbits, you’ll be able to recognize them quickly and get your pets the correct veterinary treatment right away.

Here are a few common health conditions that can affect Californian rabbits.

The Californian rabbit was originally bred to live in a warm climate. Consequently, they don’t thrive if kept in cooler temperatures.

Keep your Californian bunnies indoors or in sheltered, heated quarters to keep them cozy, especially in winter!

As one of the larger, heavier breeds, Californians can develop sore hocks if they are kept in a cage that has a wire floor.

This problem is easily avoided by providing your pets with solid floored housing, or by placing a washable mat underneath the bedding to shield their hocks and feet from the wire.

Just like people, rabbits can become obese if they eat too much and exercise too little.

Californian rabbits can be especially susceptible to obesity. As they were originally bred to provide meat, baby Californian rabbits grow rapidly and tend to lay down plenty of “coverage,” which can easily lead to them becoming overweight.

Provide your pets with plenty of opportunity to exercise and be sure not to overfeed them with treats!

Like all rabbits, Californian bunnies groom themselves constantly, especially when they are shedding.

Rabbits are unable to vomit, so the fur they ingest while grooming tends to form dry hairballs in their intestines. These hairballs can slow down the gut, causing constipation and other associated health conditions.

To prevent wool block, be sure to groom your Californian rabbits at least once a week to remove loose hair. Groom them more frequently during their three-monthly shedding periods.

Make sure their diet is high in hay and green veggies to keep things moving along and prevent blockages.

Large breeds such as Californians can find grooming themselves awkward, especially if they become overweight. This can leave your bunnies vulnerable to a nasty condition called fly strike (myiasis).

The flies are attracted to fur that has become soiled with urine and feces and the odor of the rabbit’s scent glands.

The flies lay eggs around the rabbit’s rear, and these eggs hatch into larvae (maggots) within hours!

The larvae feed on the rabbit’s flesh, causing pain and resulting in toxic shock to your poor bunny.

If you notice maggots around your Californian rabbit’s anus, you must seek veterinary attention right away.

Fly strike can be prevented by observing good hutch hygiene and by using a damp cloth to clean any soiled areas of fur that your bunnies can’t reach.

If you provide your Californian bunnies with an outside run where they can play on warm, sunny days, there is a chance that they could pick up ticks, fleas or worms.

Always ask your vet for advice on what worm, tick and flea prevention products to use on your pets, and be sure to treat them regularly in accordance with your vet’s instructions.

You can prevent parasite problems by keeping your rabbits’ housing clean and by providing them with good quality hay bought from a reputable supplier.

Be wary of collecting fresh grass for your rabbits that may be from areas where worm eggs are present. When your bunnies eat the grass, they ingest the worm eggs and infestation can result.

If you’re not planning on raising Californian rabbits, pet does should be spayed in order to prevent uterine cancer.

Rabbits’ teeth grow throughout their lives.

Be sure to provide your Californian bunny with plenty of hay and chew toys to help keep his teeth worn down naturally.

You will need to take your bunny to the vet regularly for teeth and nail trims. 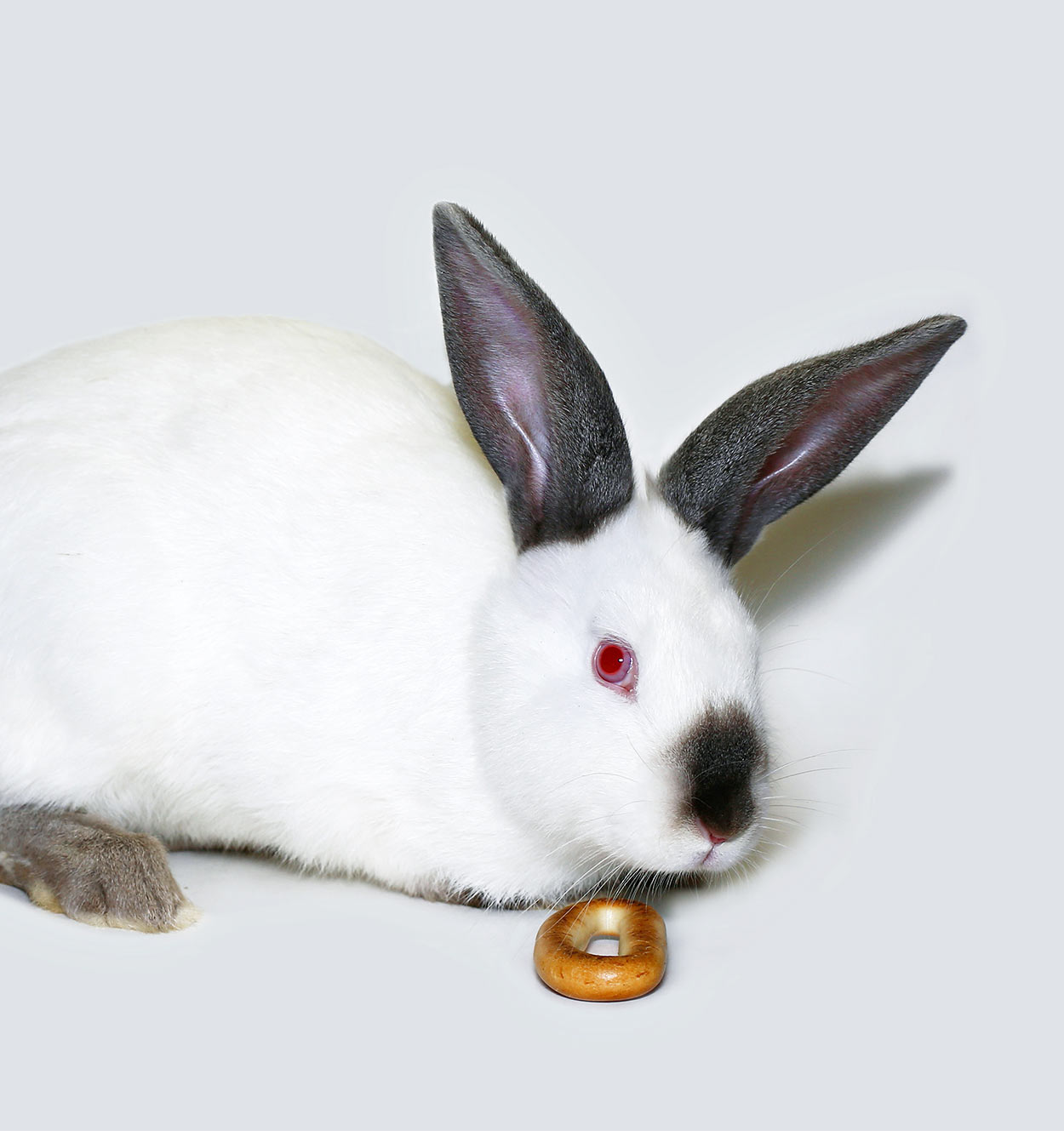 Myxomatosis is a potentially fatal disease of rabbits that is spread by fleas and mosquitoes and through contact with other infected rabbits. There is no cure for myxomatosis.

If you allow your Californian rabbits to play outside, you should first make sure that myxomatosis is not active in your area.

Check out the House Rabbit Society’s website for a list of areas in the US where myxomatosis is reportedly present. If you live within or adjacent to one of the danger areas, keep your pet rabbits indoors until the outbreak has cleared.

Although UK residents can have their bunnies vaccinated against this disease, the vaccine is not yet available in the US and it cannot be legally imported.

Early signs of myxomatosis include discharge, crusting and inflammation around the eyes, followed by blindness. Affected animals will often crouch miserably, seemingly unaware of their surroundings.

If one of your rabbits develops any of these symptoms, isolate him from his companions right away and seek veterinary advice.

Viral hemorrhagic disease (VHD) is a highly contagious disease of rabbits that is caused by a calcivirus.

Symptoms are usually very quick to appear and include:

It is not uncommon for rabbits to die within 48 hours of contracting the disease, sometimes without showing any symptoms at all.

VHD tends to occur in localized outbreaks. Before allowing your Californian bunnies to play outside, check with your vet that the disease is not prevalent in your area.

Californian rabbits can live for between 5 and 10 years when kept as pets.

Be sure to keep your bunny in a large, well-maintained cage, and feed him a healthy diet that’s full of fiber.

Allow your Californian bunny plenty of space so that he can exercise. A fit rabbit that’s a healthy weight will be less prone to obesity-related health problems that could shorten his life.

Remember, a healthy, fit rabbit will usually live longer than one who is fat and idle!

All bunnies thrive on companionship. If deprived of the company of their own species, they can become depressed and withdrawn.

Although Californian rabbits do get along with guinea pigs, dogs and cats, provided they are all safely socialized, they will be happiest if kept in the company of their own species.

Males and females are usually more compatible than two bunnies of the same sex, but you must have them neutered immediately to avoid a population explosion!

In addition, female Californian rabbits can run a high risk of developing uterine (womb) cancer, so having your does neutered is a sensible move.

Baby Californian bunnies are ready to leave their mother at eight weeks of age.

If you decide to welcome a pair of Californian rabbits into your life, it’s a good idea to choose siblings from a litter.

It is always advisable to buy a purebred Californian rabbit from a registered breeder.

Responsible breeders will be committed to maintaining recognized breed standards and raising Californian rabbits that are healthy and well-socialized.

For recommendations and breeder contacts in the US, check out the Californian Rabbit Specialty Club and the American Rabbit Breeders Association, Inc. (ARBA).

If you live in the UK, look at Pets4Homes’ website.  They advertise rabbits for adoption, sale and stud.

Is A Californian Rabbit Right For Me?

Californian rabbits can live for up to 10 years, so bear this in mind when you decide to take them home as pets. They also need annual veterinary checks, vaccinations (if you live in the UK), and regular worming and parasite treatments.

You must be able to provide your Californian bunnies with spacious indoor or heated outdoor accommodation, as they do not tolerate cold.

Californian rabbits need plenty of room for exercise in order to prevent them from becoming overweight.

Even though Californian rabbits have short hair, they still need grooming once a week and more frequently when they’re shedding.

Do You Already Have Californian Rabbits?

If you already have Californian rabbits, why not tell us about them?

What are their names?

What personality quirks do they have?

And have you taught them any really cool tricks?

Use the comments section below to tell us all about your gorgeous Californian rabbits!

Royal Society for the Prevention of Cruelty to Animals, Rabbit health and welfare. 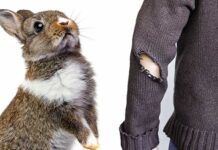 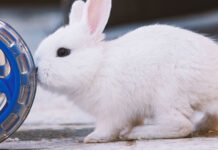 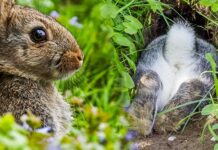 Why Do Rabbits Dig Holes?

Why Do Rabbits Dig Holes?

Why Do White Rabbits Have Red Eyes?

Why Do Rabbits Lick Things?