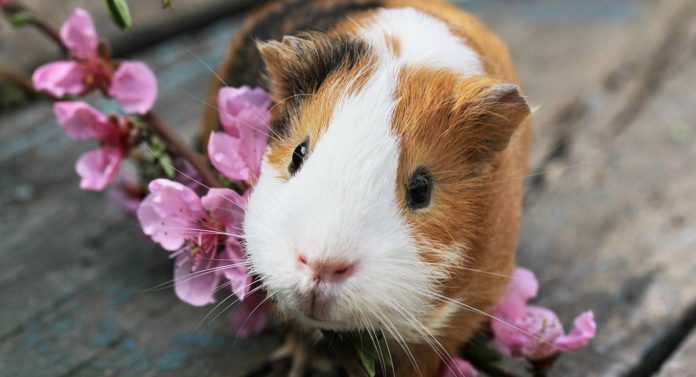 Does it really matter if you have just one guinea pig?

How does having one little cavy alone affect its health? Are there issues that arise when you keep a solitary guinea pig?

What do guinea pigs get out of living in pairs or groups?

Read on, let’s find out!

The Social Lives of Guinea Pigs

In the wild, guinea pigs (or cavies) have been observed living in large, mixed-gender groups.

They have also been seen living in smaller family groups with one male, one or two females, and offspring.

These differences in social structure may have to do with adaptation to specific environments – the smaller family groups reside in areas of high predation and low densities of ground cover.

A smaller group of cavies would be better able to protect itself in that kind of environment.

Larger males dominate the groups. Guinea pigs live in polygynous units, with one male protecting several females and their territory.

Females have a weaker hierarchy. They tend to be more flexible than males in terms of adapting to social grouping changes.

The Significance of Guinea Pig Families

Research shows that this living in groups, and the social conditions in which guinea pigs are reared, affects behavior and the degree of stress they face.

Guinea pig groups have a strong bond with one another, and relationships seem to last a long time. A lot of socialization happens in guinea pig groups.

Living in groups allows guinea pigs to acquire the skills they need to handle stratification based on dominance and other group dynamics.

This reduces their aggression levels and stress, and improves health.

Social activity in guinea pigs is tied to their hypothalamic, pituitary, adrenal glandular activity, and their nervous systems.

Can guinea pigs live alone in the wild? That doesn’t happen naturally, so no – their social relations with one another are too important.

Can Guinea Pigs Live Together?

Guinea pigs can and should live together, in groups of at least two or more!

They are able to form long-lasting social groups with one another that allow them to become socialized and stay healthy.

Guidelines for researchers who study guinea pigs suggest that guinea pigs should be kept in single-sex groups, or in stable breeding colonies.

It is best to house two or more females together. Their greater social adaptability and weaker hierarchy structure means they’re most likely to get along well.

We do not recommend housing an unneutered male and female together, unless you want to take care of babies!

Fighting rarely occurs between the sexes, so your guinea pigs will get along well! But a male and female may get along too well – if you get our drift.

A neutered male may function well with female guinea pigs.

Two or more males can also get along well, especially if they were reared together.

But, fighting and stress can occur with male guinea pigs who are unable to establish a stable dominance structure within their relationship.

In some cases, this can lead to coma and death in just a few days!

So if you’re housing male guinea pigs together, be careful in introducing them and make sure they’ll be able to get along.

If your guinea pigs can’t get along, they can suffer from stress that leads to physical issues such as weight loss, higher cholesterol levels, and other physiological problems.

The answer to this question is no, if at all possible.

One interesting thing about guinea pigs is that they are the subject of a lot of research.

That’s why we often say someone is a “guinea pig” if they’re having something tested on them.

In a way, that’s good. We know a lot about guinea pigs!

So, what does the research say about a guinea pig living alone?

Guinea pigs show a strong need to be in contact with other guinea pigs.

Keeping at least two together is, according to scientists, the most appropriate way to house guinea pigs.

The relationships between pigs influence their ability to cope with stress and to survive. The welfare of guinea pigs often depends on their social security.

Studies on guinea pigs show that isolation does not necessarily negatively affect normal mating, or influence certain aspects of guinea pig life such as maternal behavior.

However, it does lower their health and their ability to adapt to new environments. Expect pups and males to be especially affected.

It also influences their ability to defend themselves when reintroduced to a group. The age at which they were isolated may be a factor.

Socially stressed out guinea pigs can develop changes in their endocrine system that can result in internal lesions and death.

For pet pigs, being by themselves is disturbing both emotionally and physically.

Can Guinea Pigs Be Kept Alone?

If properly socialized, a single guinea pig kept alone may not suffer in terms of health – as long as you take certain precautions.

Guinea pigs that have been handled daily from an early age won’t be stressed out by human contact, and may come to see humans as companions.

So, as long as you regularly provide them with your company, they can be fine.

It is important that, in this situation, you pay plenty of affectionate attention to your pet and gently handle him or her on a daily basis.

We also recommend introducing types of environmental enrichment to allow your guinea pig plenty of exercise and play activity. They love to tunnel, chew, and hide!

If you have more than one, but can’t keep your guinea pigs together, it may be still helpful to keep them within hearing, smelling, and seeing distance of each other.

Consider playing music to prevent startling your pet with sudden noises. However, make sure the music is quiet, at background levels.

Make sure to check your pig often for any health issues arising from their solitary existence!

Can guinea pigs live alone? As you know now, it’s not recommended.

Has your old one passed away? Did you get a new one to keep your remaining pig happy?

Fortunately, keeping another guinea pig isn’t that much more work or expense than keeping just one.

First make sure you have adequate cage space – aim for  a 10.5 square feet enclosure as your minimum for a pair of pigs.

Note that guinea pig behavior may change during adolescence, so if you get a guinea pig that’s 3-5 months old, relationships between the animals may change over time.

During the first two weeks, keep your new pig quarantined to avoid any transmission of diseases.

Getting Them Started Together

Introduce your old pig and your new one in a neutral space, away from distractions such as other animals and kids.

Don’t give them space to hide. Keep an eye on them for at least an hour before leaving them alone.

Look for signs of stress in either animal – teeth chattering, nipping, fighting, butt-sniffing. They may squeak at each other, which could signal that they’re establishing a pecking order.

If they have trouble getting along, keep them separate for a few weeks and keep introducing them in a neutral space.

It may take them a few days to work it all out, but hopefully they’ll be compatible in the end!

When it’s time to house them together, make sure they each have their own shelters and hiding places so that they can spend time away from each other if they need to.

Holding Introductions at a Rescue Center

Some rescues will help with introductions if you need it, so if you’re looking for a new pig, consider getting one from a shelter!

At a rescue, you may be able to find a compatible creature based on age and mature personality, rather than picking out a baby from a breeder or pet store.

Of course, rescues will have young pigs as well.

Young guinea pigs may be more easily accepted in a group’s pre-existing hierarchy, so you should think of that as well.

So what’s the verdict? Can guinea pigs live alone?

If at all possible, guinea pigs need guinea pig companionship to keep them stress-free and healthy.

If it’s not possible for you to keep more than one guinea pig, guinea pigs need human companionship provided daily.

These are social animals, and social structures help keep them feel secure and safe.

So the answer to the question “Can guinea pigs live alone?” is basically “Yes, but…” We can’t recommend it, and you must take care to spend time with your guinea pig pal to make sure he doesn’t suffer from loneliness.

Royal Society for the Prevention of Cruelty to Animals, Can you keep rabbits and guinea pigs together?

Einon, D. F. et al (1981). Isolation has permanent effects on the behavior of the rat, but not the mouse, gerbil, or guinea pig. Developmental Psychobiology, 14(4).