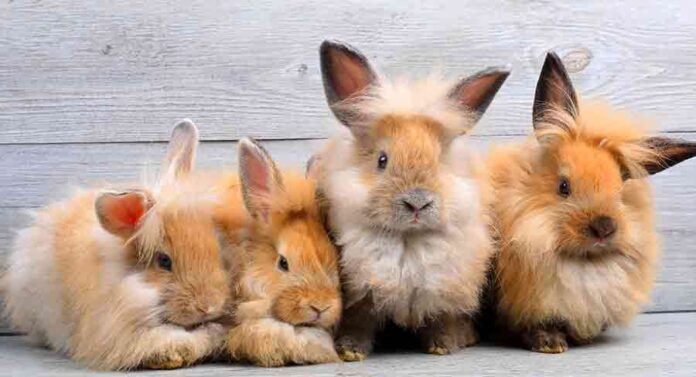 There are many types of long haired bunny.

Each one has their own unique temperament, which means there is a long haired bunny for every kind of pet parent.

Some long haired rabbits are also slightly less high maintenance than the rest. Although they all need a lot of commitment to grooming!

A long haired bunny is appealing to pet owners because we tend to think of fluffy things as being extra specially cute.

But they’re not just good looking.

Before long haired rabbits were kept as pets, they were reared commercially for their fur.

Shed fur from angora rabbits was collected and spun into soft yarns, with strong insulating properties.

Today, not only have angora rabbits been selectively bred into several distinct varieties, but many other long haired breeds have joined them on the show bench.

In this article, we present 14 must-know types of long haired bunny.

Cashmere Lop rabbits weigh up to 4 pounds and their coat is as soft and luxurious as it sounds.

This long haired bunny has a short, dense undercoat, and a long soft outer coat, which can reach up to 2 inches long.

Their fur is soft and silky to the touch, and the breed standard accepts Cashmere Lop bunnies in a wide range of beautiful colors.

Whilst they can weigh up to 4 pounds, the breed standard gives preference to rabbits weighing around 2 pounds.

And if that’s still too big, you might want to consider their miniature counterpart instead.

Mini Cashmere Lop bunnies weigh no more than 3.5 pounds, but they have the same long soft coat as a full-size Cashmere Lop.

Despite their size, an ideal Mini Cashmere Lop is quite chunky and thickset. But, this long haired bunny is still fragile, so they need to be handled with care.

Unfortunately, a lot of Mini Cashmere Lops (and their bigger cousins) have been deliberately bred for a very flat face.

This has been popular because it makes them look cute and baby-like their whole life.

But, it also increases the risk of dental diseases and respiratory problems, which are upsetting and frequently expensive to manage.

No guide to long haired rabbit breeds would be complete without admiring angoras.

Angora rabbits were originally bred to produce fiber for spinning and turning into clothes. Some owners report their Angora rabbit’s fur growing up to 8 inches long!

But they are also known for being very placid and easy to handle. So they’re popular with all kinds of people.

What Sets the Giant Apart?

The Giant Angora bunny is the largest of those.

This long haired bunny weighs at least 10 pounds, and their bulky frame is covered in three different types of hair, which are technically known as wool:

Their fur is always white, and does not shed. Owing to it’s very fine texture, Angoras need daily grooming to prevent mats forming.

The English Angora is the smallest of the angora rabbit breeds recognized by ARBA.

Unlike the Giant Angora, which is always white, English Angoras come in a range of pretty colors.

But like all Angora rabbits, this long haired bunny needs a LOT of grooming.

On the bright side, they are renowned for having a very gentle nature, so brushing them every day should be a pleasant bonding experience for you both, rather than a chore.

French Angora rabbits are large longhaired rabbits – about the same size as the Giant Angora in fact.

They are breed which still has the most in common with the original angoras – the common ancestor of all the modern angora breeds.

The French Angoras’s coat is slightly less over the top than other angora rabbit varieties.

So, their face is a little less lost in all their fluff, and they are slightly lower maintenance.

This makes them popular pets. But they still need brushing at least twice a week.

Last but not least, the Satin Angora has an exceptionally fine coat, with a sheen on their awn coat that glistens in the light.

They were developed in Canada in the 1970s by crossing French Angoras with rabbits carrying the satin coat gene.

Due to having a sparser awn coat, with a narrower shaft diameter, the Satin Angora is even more prone to matting than their other angora cousins.

They need daily brushing to keep on top of knots and tangles.

The Holland Lop’s coat is medium long, rather than super long.

But it does have a soft ‘rollback’ texture – meaning it slowly returns to position if you stroke it in the wrong direction, rather than bouncing back instantly.

Giving a feeling of luxurious depth.

Holland Lops are also highly regarded for their calm and friendly disposition.

They are one of the smallest lop ear bunny breeds, weighing just 2 to 4 pounds.

Their size, temperament, and soft fluffy coats have made them one of America’s most beloved pets.

They consistently rank among ARBA’s top 5 breeds by number registered each year.

The Jersey Wooly is something of a national bunny treasure in the United States.

It was created in the 1980s by crossing Netherland Dwarf rabbits with French Angora rabbits.

The result is a small bunny with a wooly-textured coat.

They are said to be exceptionally friendly, and their size makes them relatively easy for most people to keep.

Jersey Woolies weigh 2.5 to 3.5 pounds. Despite being small, they are very lively, and need lots of space for exercise.

Lionhead rabbits are distinctive for having a mix of fur that is long, and fur that is short.

Since long fur requires a lot of grooming, this makes Lionheads a more manageable compromise for lots of bunny owners.

Their coat can be white or tortoiseshell colored. The long haired bunny fur in their coat is isolated to their neck – giving them the mane which inspired their name – and their flanks (known as a skirt).

How pronounced their mane is depends partly upon whether they inherit one or two copies of the mane-causing gene.

Most modern Lionhead have two copies, and boast a lavish mane for their entire life. But some only have one copy. Their mane is thinner, and may disappear altogether as they mature.

Lionhead rabbits are popular pets, so lots of breeders prioritise breeding for a friendly, people-centric temperament.

Mini Lops are a dwarf rabbit breed with a medium length, lustrous coat.

Short coats are penalized in the breed standard, which means Mini Lop breeders err towards producing bunnies with longer coats.

But they pack a lot of playful personality into a small bundle. Like most rabbit breeds they’re also clever enough to respond to basic clicker training.

However, despite being small and cute, this long haired bunny is not recommended for young children. They have a reputation for being skittish and nervous, and may bite or kick a child who handles them clumsily, or frightens them with loud noises or rapid movements.

This is likely to be a trickle-down effect from the burgeoning popularity of designer dog breeds like Labradoodles the Chiweenies.

It means breeders are more likely to embrace new types of longhaired rabbit, created for docile temperaments or easier grooming.

Here are some examples of relatively new longhaired rabbit breeds, which are still quite unusual.

Lionhead rabbits traditionally have upright ears, but the Mini Lion Lop combines the mane and skirt of the Lionhead with floppy Lop ears, and packs it all onto a dwarf rabbit frame.

This long haired bunny is an adorable combination, which has already gained legions of fans in the United Kingdom since it was developed in the early 2000s.

They have yet to be recognized by the American Rabbit Breeders Association however, so they’re slightly harder to find in the U.S. and breeders may have waiting lists for kits.

Mini Lion Lops weigh just 3.3 – 3.5 pounds when they’re fully grown. They come in a huge variety of colors, with new ones regularly being added to the breed standard.

The Swiss Fox rabbit is an unusual type of long haired rabbit, which originated in Switzerland in the 1920s.

They were created from hybrids of Angora and Havana rabbits.

As their name suggests, the breed founders were trying to create bunnies with a fox-like coat.

It’s impossible to ignore the fact that they failed wholeheartedly. Swiss Fox bubbies come in a huge rage of colors, none of which look terribly foxy.

But, they did end up with a very gentle, docile bunny, with a medium-long fluffy coat that needed less grooming than the purebred angoras.

So their new creations are steadily gaining a cult following anyway.

Teddy Dwarf rabbits are a hybrid between Angoras and Lionhead rabbits.

They have a dense, medium-long coat which tends to grow outwards from their body, giving the impression of a LOT of fluff.

They are a relatively recent breeding endeavor – since the early 2000s. And whilst they’re rapidly gaining popularity across Europe, they’re still rare in the United States.

Which means they are also very delicate, and best suited to experienced bunny parents, and families with sensible older children.

The Teddy Lop breed was founded in 2009.

It is similar to the Teddy Dwarf, but a little larger. Individuals weigh in the region of 3 to 5 pounds.

And significantly, Teddy Lops have floppy lop ears, whereas Teddy Dwarves have erect ears which stand up from the head.

We’ve got a detailed article about looking after pet rabbits right here.

But here are some additional things to consider, when bringing home a long haired rabbit breed:

Do You Have A Long Haired Bunny?

What breed are they? 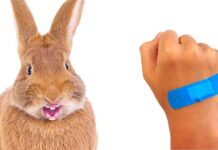 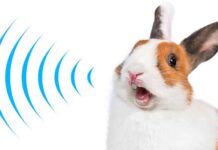 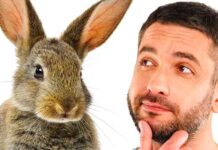