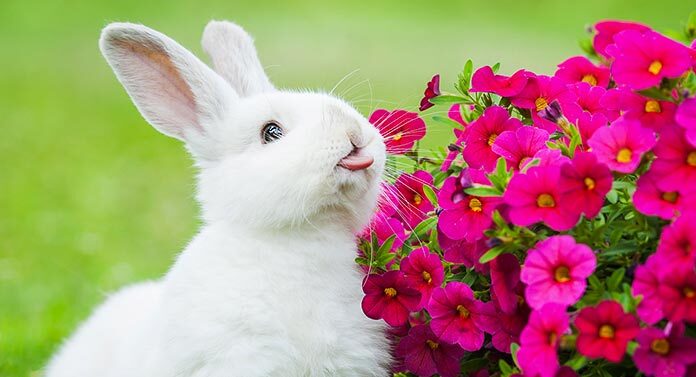 Why do rabbits lick you? Licking and grooming is a natural rabbit behavior, and a common sign of affection.

Rabbits will often lick and groom one another when they feel safe and comfortable.

Happy rabbits may try to lick you to show their affection. This is one of many ways that rabbits express feeling happy or safe.

Why Do Rabbits Lick You?

Rabbits can’t tell us what they’re feeling, so it’s up to rabbit owners to learn how they express themselves through their behavior.

Not all rabbits will lick you. But, some owners will find that their rabbits do lick them when they’re being handled.

Your rabbits may also lick each other.

Pet rabbits, just like their wild cousins, lick each other as a grooming behavior. It is a common way for rabbits to display affection to one another.

If your rabbit licks you, you can assume it’s for the same reason. Your rabbit may be trying to show you that it feels safe in your presence, and to offer some affection.

It’s not something that can be forced, but can be quite a surprise the first time it happens!

Do Wild Rabbits Lick Each Other?

It’s not just pet rabbits that show affection and security by licking you or each other. In fact, this behavior is also seen in wild rabbits.

Although they’ll only lick each other – not humans!

Studies over time have looked into wild rabbit social behaviors.

Many have observed grooming and licking behaviors in the morning, even over the span of a few hours.

Of course, we can’t ask rabbits what they’re feeling when they lick us or each other.

But, because of the times and places rabbits feel safe to groom each other, we can assume this behavior is a way to display affection to one another when they are feeling comfortable.

Does My Rabbit Trust Me?

If your rabbit tries to lick you when you handle them, when they’re near you, or even when you’re moving things around in their hutch, it’s very likely that they trust you a lot.

Grooming and licking is a way for rabbits to show affection.

So, they will only lick you if they feel a very strong bond with you.

There are a number of other behaviors that can also show that your rabbit feels comfortable and safe around you. So, let’s take a look at them next.

Other Signs of Rabbit Affection

There are a number of behaviors you can watch out for in your rabbit to see that they have a strong bond with you.

Your rabbit might only do a few of these, or they might do every single one! How many do you recognise?

Another way that rabbits may show you affection is by gently nibbling you.

Of course, this isn’t to be confused with hard bites or nipping. If your rabbit does this, it usually means they’re angry, or feeling unsafe!

Gently nibbling on your hands, like licking, is more likely a sign of affection, and not an attempt to hurt you or defend themselves.

Stretching Out On Their Bellies

If your rabbit lies stretched out on their bellies, with their hind legs far behind them, they’re putting themselves in quite a vulnerable position.

This is a sign that they feel very safe around you, and don’t view you as a threat at all.

Especially if they flop over so that you can see their belly!

Jumping and Twisting in the Air

This behavior has a few names. Some people call it ‘binkying’, others call it ‘boinking’.

No matter what you call it, it’s a sign that your rabbit is happy around you.

If they twist and jump excitedly, they feel safe and happy. They may do this in their hutch, or out in the open in your company.

A sudden flopping behavior might worry you when it first happens! But, dramatically flopping over onto their side usually just means that your rabbit feels safe and comfortable around you.

Particularly if they expose their belly.

Nudging You With Their Nose

This is another one of those behaviors that could mean one of two things depending on the context.

If your rabbit is nudging you quite aggressively when you do something they don’t like, they may be feeling annoyed by you, and be attempting to get you away.

For instance, if you’re between them and their food.

But, approaching you and gently nudging you is usually a sign of affection, and may even be a request for strokes and cuddles.

If it is accompanied by licking, you can assume that your rabbit is trying to show you some affection.

Clicking teeth is another sign that your rabbit is happy around you.

Many people compare it to a cat’s purring.

If your rabbit clicks their teeth when you’re petting them or when you come near them, it’s a sign that they’re comfortable around you.

It is possible this behavior can also happen when your rabbit is distressed, so make sure they aren’t showing any other signs of discomfort.

Rabbits have scent glands underneath their chins. So, they may rub their chins on objects – or on you – to mark out their territory!

If your rabbit rubs their chin on you, they see you as theirs, rather than as a scary predator.

What If My Rabbit Doesn’t Lick Me?

You shouldn’t be too concerned if your rabbit doesn’t lick you. It doesn’t mean that they don’t feel safe or affectionate towards you.

There are plenty of ways that pet rabbits will show their feelings. And it can take a long time to build a really strong bond with your bunny.

If you’d like to get to the stage where your rabbit shows affection by licking you, make sure you interact with them regularly, and only ever handle them gently.

You can build a strong bond by hand-feeding your rabbit yummy treats, and spending time with them outside – making sure they’re safe from any predators.

Some rabbits may never try to lick you. But, that doesn’t mean they don’t feel affectionate towards you.

Perhaps they’ll show their trust and love in a different way, such as one of the other rabbit behaviors we looked at above!

Why Do Rabbits Lick You? A Summary

So, if your rabbit is licking you whenever you pet it, or when you’re moving around in their hutch, you can relax!

It simply means they trust you, and are trying to show you some affection.

In fact, this behavior is common from one rabbit to another. See if it’s paired with any of the other affectionate behaviors we looked at!

Do you have a rabbit that loves to lick you?