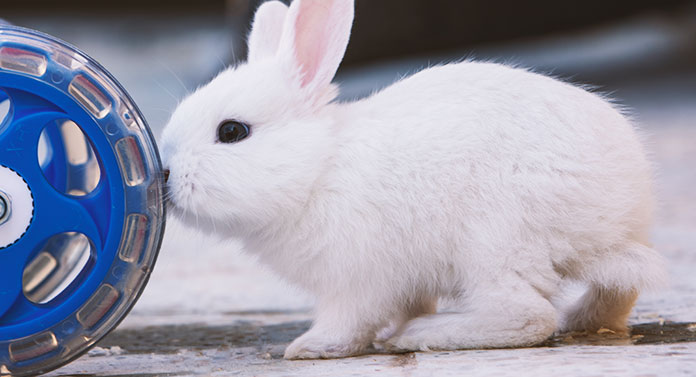 Lots of pet rabbits also nudge their owners are a friendly greeting or a way to get some attention. This behavior is sometimes called nose-bonking.

Observing what things your rabbit nudges, and when, opens a little window into what they’re thinking about.

This article is all about deciphering rabbit nudging behavior, so you can better understand your bunny!

The reasons why rabbits nudge things basically fall into one of two categories:

Why Do Rabbits Nudge Things To Explore?

Anyone with a pet bunny knows that they are curious little souls.

And they have lots of sensory tools at their disposal to help them make sense of the world.

For example, the range of sounds they can hear is nearly twice the size of ours. And their field of vision extends nearly 360 degrees.

(Of course, their super hearing and vision don’t just help them gather information for curiosity’s sake. They also protect them from being caught by predators!)

Nudging things is another way rabbits can use their senses to collect information.

Nose Nudging As A Way Of Gathering Information

Nudging is a tactile sense.

By answering these questions, nudging things satisfies rabbits’ natural curiosity to find out more about their environment.

Why Do Rabbits Nudge Things To Get Attention?

Another reason why rabbits nudge things is to get attention.

It could be as simple as a friendly greeting.

But some rabbits nudge their owners quite persistently, to try and coax treats and cuddles out of them! When this happens it is a learned behavior.

Nudging as a Learned Behavior

And that moment taught the rabbit a connection between nudging, and getting a reward.

That connection was likely reinforced by the same pattern of nudge and reward happening over and over again.

In fact, us humans quite often participate in reinforcing behaviors like this without even realising it at the time!

Being able to bash something gently with one’s nose doesn’t appear at first like a sign of great genius.

But now we’ve seen how some rabbits learn a connection between nudging their owner and getting a treat, we can use that learning ability and transfer it to other scenarios.

In fact, rabbits’ ability to respond to positive reinforcement is well established.

For example, why not practice holding your palm outstretched and perpendicular to the floor, close to your rabbit’s nose.

Wait for them to touch it, and give them a treat.

Over time, you can start giving them treats for just the most purposeful nudges, and move your hand a little way from them in between, so they have to move forward to nudge you.

Now can you make a simple obstacle course from scatter cushions, and lead them round it?

Next, why not try putting a treat into the bottom of an empty cereal box. Can your rabbit nudge it over to get the treat?

What about if you have two or three boxes, but the treat is always in the same one. Can they recognize it?

Teach your rabbit to ring some bells by nudging them.

The easiest way to do this is by hanging some bells in their habitat, and giving them a treat when they nudge them.

Once they’re confidently nose bonking those bells for treats, you can try teaching them a cue word, so they do it on command.

Then you might want to take the bells back out, and control when they have access to them!

A true connoisseur of bunny behavior might also notice that they do other things, which look like nudging, but aren’t quite.

Here are some similar, but also importantly different behaviours:

Rabbits have scent glands under their chins, and transfer that scent to objects by bumping and rubbing them.

They do it to mark their territory, decide and maintain social hierarchies, and feel good about themselves.

Was that nudge actually a surreptitious lick?

Rabbits use licking and grooming to build social bonds.

Rabbits without other rabbit buddies to live with things might try nudging and licking fluffy objects like push toys as a substitute for this behavior.

The Importance Of Nudging As Part Of A Natural Behavior Repertoire

It’s only been about 400 years since pet rabbits were domesticated from their wild cousins.

This means it’s important for pet rabbits’ welfare that they still have lots of opportunities to carry out all the wild behaviors which come instinctively to them.

Some rabbits are bolder, and more adventurous explorers, whilst others are more anxious and naturally wary.

So make sure their hutch includes a mix of tunnels and dens for hiding in, and toys to play with by nudging or chewing.

All rabbits also benefit from daily access to an outdoor exercise area, such as a run.

A great example of an enrichment activity for their run is to put a branch on the ground for them to chew on, and nudge their way through the twigs and leaves of.

Branches from apple, pear, birch, maple, willow and sycamore trees are all safe for rabbits.

Rabbits nudge things as a means of exploring them. They’re also quick to learn that they can get our attention by nudging us!

Nudging things is a normal part of rabbit behavior, and a sign that they are happy and confident exploring and interacting with their environment.

Does your rabbit nudge things?

What do you think they’re trying to achieve by it?