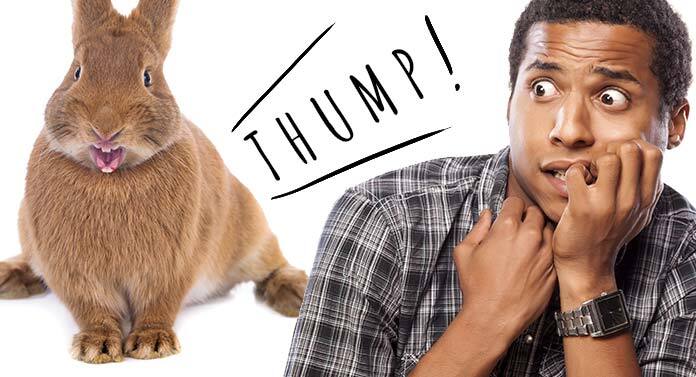 Why do rabbits thump? Are they worried, happy, or something else entirely!

Rabbits often thump their feet on the ground because they feel like they’re in some sort of danger.

However, it can also be a reaction to stress, or a way of expressing their annoyance. Some people even suggest it could be because of boredom!

Luckily, it doesn’t automatically mean you have to worry. Let’s take a closer look at rabbit thumping and how to prevent it.

Why do Rabbits Thump?

Sadly, our rabbits can’t talk to us to express how they’re feeling.

Instead, they communicate with us, and with other rabbits, through their actions and behaviors.

So what does it mean when a rabbit thumps on the ground? Here are some of the most commonly suggested reasons:

As you can see, some of these reasons are more serious than others. And, it can be hard to find out which one is causing your rabbit thumping.

But, learning which one is causing your rabbit to thump their legs on the ground can help you figure out how to stop the behavior.

We’ll look at this a little more at the end of this guide. But for now, let’s find out more about the behavior itself.

Your rabbit will usually thump one or two of its back feet. Its front two feet will often be on the ground whilst it is thumping.

It can be hard to predict when a rabbit will thump its feet.

So, you’ll likely notice it by hearing that loud ‘thump’ noise!

Rabbit thumping is surprisingly hard, and can hurt if it happens whilst you’re holding your rabbit on your lap.

We know rabbit thumping can happen in response to danger. But, what seems dangerous to a rabbit?

What Do Rabbits Think is Dangerous?

Rabbit thumping can happen for a number of reasons. If it is in response to something they see as dangerous, you might not know what it is at first.

Because, rabbits have a very different idea of danger to us.

Something that seems completely harmless to us could be scary to our pet bunnies!

For instance, a lit fire in a fireplace, loud noises from the TV, or sudden movements by you or an animal outside.

There are any number of things that could be scaring your rabbit. So, try to look at the circumstances in which your rabbit is thumping.

Is there a pattern to your bunny’s behavior?

Am I Scaring My Rabbit?

Sometimes, when you can’t find any other cause, you may worry that you are doing something to scare your rabbit.

Is your rabbit thumping when you move suddenly, or make a loud noise? If so, your rabbit might be startled by your action.

Alternatively, are you stopping your rabbit from doing something it wants to do?

Some people suggest that our bunnies thump their feet when they are annoyed by something.

If you’re stopping your rabbit from doing something it wants to, it could thump its feet on the ground out of frustration, rather than fear!

Should I Be Worried if my Rabbit Thumps on the Ground?

A rabbit thumping on the ground is most often in response to danger. So, you should make sure that there’s nothing in the immediate area that could hurt your rabbit.

Sometimes it can be a sign that your bunny is stressed out by something. Although this usually won’t cause any physical harm, it can be bad for your rabbit’s mental wellbeing.

So, if you suspect your rabbit is stressed by something, try to find out what it is.

If rabbit thumping is happening because something is annoying your rabbit, you often won’t need to worry about it. But, make sure there’s no immediate danger to your bunny.

And finally, in a small number of cases, rabbit thumping can be a sign that your pet bunny is unwell.

So, if you’ve eliminated all other causes, or have noticed any other signs of strange behavior in your bunny, take them to the vet for a check up.

How to Stop a Rabbit Thumping on the Ground

So you’ve learnt the most common reasons about why do rabbits thump. But, should you try to stop it?

Rabbit thumping is a normal behavior that most bunny owners will witness at some point over their rabbit’s life.

So, it isn’t necessary to stop your rabbit from thumping.

This behavior is a natural way that rabbits communicate with one another in the wild. So, it’s not always a bad thing that your rabbit is thumping on the ground.

If your rabbit thumps when you do something that annoys it – like not letting it into certain parts of your house – you won’t be able to stop it thumping.

Never do anything to hurt your rabbit. This will only stress it out, and make it more likely to thump its feet.

To stop your rabbit from thumping, it’s best to try and eliminate anything that your rabbit could perceive as a danger.

To minimise your rabbit thumping its feet on the ground, try to eliminate anything in your home that could be seen as a danger to your rabbit.

Or, try to remove anything that your rabbit has reacted to with thumping before. They could be scared of this.

Recognizing patterns in your rabbit’s behavior is the key to removing things your pet sees as a threat.

Ultimately, though, thumping is a normal behavior for most rabbits.

So, your rabbit could thump his feet even if you’ve removed everything he has reacted to in the past.

If your vet has checked, and knows your rabbit is in good health, and you are doing everything to make your rabbit feel safe and happy, you shouldn’t worry too much about thumping.

Why Do Rabbits Thump – Summary

Have you found out the most likely reason for your rabbit’s thumping behavior?

Luckily, rabbit thumping usually isn’t a sign that anything is wrong with your rabbit. But, it can mean that something is stressing them out or scaring them.

So, to minimize this behavior, try to make your rabbit feel as safe and happy as possible.