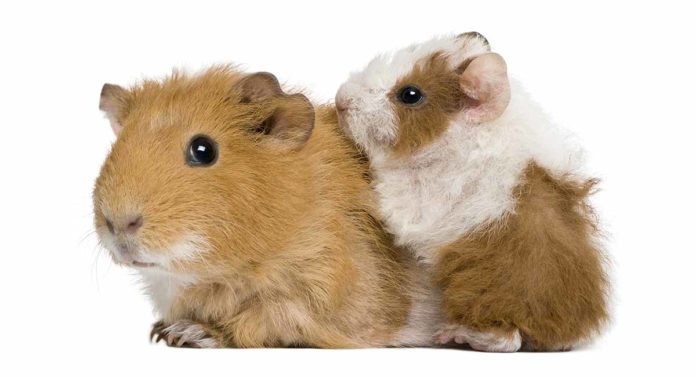 The sow (female) and boar (male) need to be together for at least 17 days, and the gestation period is then around nine weeks.

There is also quite a small window for safely breeding your female guinea pig.

Before 6 months old they will be too young. But after a year their pelvis may not cope with birth if it is their first time.

You will need to plan their mating carefully to fall between these windows, taking into account their nine week gestation period.

To be on the safe side make sure that the mating takes place at least eleven weeks before they have their first birthday.

Breeding guinea pigs is not without its issues. These can impact both the sow and her babies.

Female guinea pigs can struggle to give birth if their first mating is after their first birthday.

This is due to their pelvic bones fusing in position, and struggling to allow the fully formed baby to pass through and out into the world.

It’s important to monitor your piggy when she is close to giving birth for any signs of complications. And to ensure that you have enough funds saved up to get her veterinary attention if she seems in distress.

When breeding animals, stillbirth is always a risk. Guinea pigs may have litters with one or more stillborn babies. In the worst case scenario it’s possible neither the babies or the mother will survive.

You need to ensure that you are mentally prepared for this. Protect young family members from this reality by checking the cage first. Prep them with the knowledge of this reality if you feel they are emotionally old enough to deal with it.

Before breeding guinea pigs you need to know exactly what you are going to do with the babies.

There will potentially be as many as 8 in a litter, if you are lucky!

Not only do they need to have potential homes lined up, but you need to have cage or hutch space enough to keep them all if these homes fall through.

Our sows mostly live in a big commune, where there is plenty of space for new additions. The boars however often do not get along and need to be isolated.

Males from the same litter can live happily together for their lifetimes.

But, there is no guarantee. In thirty years of guinea pig owning I have only ever known two sets that were truly squabble free.

Your litter will need:

If you intend to keep the female babies then ensure that you have enough space for up to 8 additional members of the group.

As well as the finances to pay for the additional food, hay and care needs.

You will need to have plenty of time for cuddles and treats for all of them.

Even if you intend to rehome your babies, they will need to live with you for around the first six weeks of their lives.

But, after a month the baby boys will start to show far too great an interest in their mother and female siblings!

That’s right, guinea pigs have no qualms about mating with their close relations.

So it’s vital that you separate them for the health of the sows.

Carrying a litter immediately after giving birth, or when you are a few weeks old yourself, is very risky.

Not to mention the genetic risks accompanied by such a close relation.

Make sure you have space for the boys to live away from their mother but with you until they are 6 to 8 weeks old and ready for their new homes.

If you are rehoming any babies, be prepared that at any point in their lifespan an owner may no longer be able to keep them and might want to return them to you.

You will need to know beforehand what your policy will be on bringing any unwanted babies back into the fold.

Happy with all the potential problems and rehoming worries of breeding guinea pigs? Great! It’s time to put those piggies together.

Although it’s possible that the sow and boar won’t get along, it’s unlikely.

Bring your female guinea pig to the male and pop her into the cage with him. Don’t be tempted to sit around watching them, as being moved and put in with a new partner is stressful for your girl.

Give them both space, checking periodically that they are not fighting and to make sure they’ve got enough food, water and hay.

The boar will make a loud humming purr to show his interest.

A female guinea pig’s heat cycle lasts around 16 days, so to be sure that they have mated at the correct time you will need to leave them together for this time as a minimum.

Do not leave the sow with the boar for more than 8 weeks.

He can get her pregnant immediately after the babies are born, but this will be too soon for her little body to safely cope.

He might also accidentally hurt the babies if they get underfoot.

If no babies arrive ten weeks after they are separated, then you can try putting them together again. But only if your girl will still be under a year old at the time of birth if it is her first litter.

A female guinea pig will often look very pregnant after a few weeks.

They can double their weight, and their sides will have a distended look that is a clear departure from the usual guinea pig oval shape!

Make sure that you check her water more regularly as she might drink more. Continue with an excellent diet with lots of vitamin C packed veggies as well as constant access to hay.

It’s okay to gently handle her in the early weeks, as long as she is a confident character normally.

If she’s a nervous pet normally then avoid stressing her with over handling during this period.

In the days before birth it’s best to look, pet, but not lift her up unless you need to.

Hopefully, approximately nine weeks after your male and female guinea pigs meet, a litter will be born.

Anywhere from 1 – 8 babies strong, the usual number is more like 3 or 4. And they will be born running!

Baby guinea pigs are fully furred, with open eyes and although they will nurse for a few weeks from Mom they will begin eating from day one too.

Although it’s safe to handle them at this point, make sure that you don’t distress their mother by interacting with them too much in the first few days.

Newborn guinea pigs will be up on their feet within minutes of being born.

If you happen to be around when their Mom is giving birth, then unless she appears to be in distress just give them some space for half an hour before coming back to check on her.

She will clean the babies and eat the placenta, so don’t worry if you see something bloody hanging from her mouth!

She might also eat the bloodied sawdust on the floor if this is your bedding of choice. This is a natural response to discourage predation.

The babies will be wet and wobbly for a little while, but will quickly appear to be simply miniaturized versions of their adult selves.

We have all heard tales of pet store guinea pigs being inaccurately sexed. But the process is actually fairly straight forward if you know what you are looking at.

The female babies will have “Y” shaped private parts, and the boys will look more like an “i”.

As they grow over the first few weeks the differences will become more obvious. After a fortnight you will see the boys’ penis extending from the area if you push just above it gently.

If you are unsure, have a look at your sow and boar and compare them with the babies.

Should You Breed Your Guinea Pig?

Some people believe the pet guinea pig population is big enough, and new litters shouldn’t be bred while abandoned pets still wait to be adopted.

Personally, I see no harm as long as you have an iron-clad plan for keeping those babies safe for their lifetime.

Guinea pigs are wonderful pets, but they are sadly short lived compared with us humans.

We breed our pets occasionally to continue to enjoy their lines.

We never inbreed within families, and we make sure there is a healthy pot put aside for covering any medical problems that might come up.

When deciding whether to mate your guinea pig make sure she is the right age, in great health and that you are fully prepared to deal with any of the consequences, bad or good.

You should breed your female guinea pig no more than every six months. And not at all if you have missed that pelvic problem window for her first litter.

Do You Have Experience Of Breeding Guinea Pigs?

What advice would you give someone thinking of breeding guinea pigs for the first time?

Let us know in the comments box! 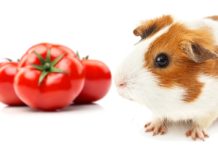 Can Guinea Pigs Eat Tomatoes Or Is This Fruit Bad For Them? 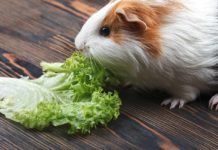 Can Guinea Pigs Eat Tomatoes Or Is This Fruit Bad For...

Vitamin C For Guinea Pigs – Keeping Your Piggies Fit and...