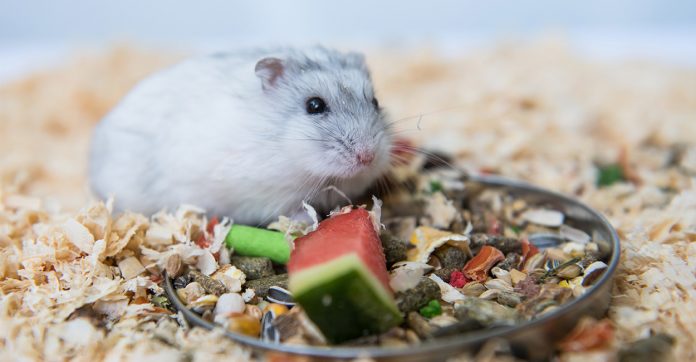 You’d love to share a refreshing treat with your furry friend, but can hamsters eat watermelon?

The quick answer to the question  is “yes,” but the complete answer is, “only in moderation.”

Watermelon is ruby-red, crunchy, sweet, and juicy. Obviously! But is it a fruit or a vegetable?

The answer may surprise you! Would you believe it if I told you that watermelon is both?

More on that later!

Watermelon signals summer like no other fruit, er, vegetable. The sight of a giant, oblong, verdant striped melon makes me want to stockpile them and eat as much as I can while the watery goodness lasts through the sizzling summer months.

Which is why we need to be careful about feeding a hamster watermelon. It’s natural to want to share our treats with our pets, but like us, they can sometimes overindulge on goodies.

Part of the reason hamsters should only eat bits and bites of watermelon lies in its name: watermelon. This awesome delicacy is more than 90% water, and too much water will give your hamster diarrhea.

On the other hand, watermelon is a healthy snack, loaded with nutrients that are good for both people and hamsters.

We’ll answer these questions more completely below, but first let’s take a closer look at this unique “fruit-vegetable.”

Most of us eat watermelons with the classic rosy-pink to deep-red flesh. But the succulent treat also comes with white, pink, yellow, and orange flesh.

Watermelon is considered indigenous to Africa, although its exact birthplace is the subject of some debate. It appears that even King Tut was a fan of the sweet treat, as watermelon seeds were among the items discovered in his tomb.

By the 7th century watermelon had reached India, and by the 10th century the Chinese were growing watermelon. Today, the Chinese are the world’s largest grower of this liquidy snack.

Nowadays watermelon is a universal food, although not exactly in the same form as the original. Have you ever had seedless watermelon?

So-called seedless watermelons contain crude seed structures that remain white, soft, and undeveloped. You’ve no doubt noticed that these nuisance-free melons are a bit pricier than the traditional watermelon?

A large part of the reason is that the seed production for seedless melons is extremely labor-intensive, a cost that is passed on to the consumer.

Japanese researchers developed the seedless melon in 1939 but it wasn’t until the last 20 years or so that it has come to rival the seeded variety. It’s been estimated that, as recently as 2014, seedless melons represented the vast majority (almost 85%) of sales in the U.S.

The U.S. comes in at 6th place in terms of global watermelon production, with California, Florida, Texas, and Arizona among the highest producing states. Watermelons thrive in warm climates and since they have a 90 day growing cycle, the southern states provide the largest production window.

Eventually Japanese farmers took the watermelon experimentations one step further by growing square melons. Why? In theory cube-shaped melons are easier to transport.

But in fact these melons are almost three times the cost of oblong ones, making them rather rare.

As we mentioned, watermelon is aptly named, since it is nearly 100% water. As you would expect, it is low in fat, making it an excellent low-calorie sweet.

One cup of diced watermelon contains around 43 calories.

Can watermelon help us in the quest to stay healthy and fit? Most experts would agree that it doesn’t hurt.

Studies have shown that the risk of developing asthma is lower in individuals who consume high amounts of certain nutrients. Vitamin C is one of those nutrients, and one can gain 10% of the daily recommended value of vitamin C from a 100 gram serving (approximately 2/3 cup) of watermelon.

In addition, vitamin C is essential to the production of collagen, which is key to healthy skin and hair.

Watermelon flesh also contains healthy carotenoids, including lycopene. One study found that intake of watermelon extract enhanced the health of the circulatory system in adults with prehypertension or stage 1 hypertension.

Researchers concluded that a diet rich in lycopene may be helpful in the fight against heart disease.

Only tomatoes have more lycopene than watermelon! But remember this: If you eat watermelon for its lycopene content, red watermelons have the highest concentration of lycopene (4–5 milligrams per 100 grams) while orange and yellow watermelon have lesser amounts.

Unlike the fragrant flesh of the watermelon, the rind, while edible, is not commonly eaten. It contains citrulline, a sharp-tasting amino acid, and it is not nearly as pleasant-tasting as the meat.

Can hamsters eat watermelon rind? You can offer them a nibble, and see how they respond as it will not harm them.

But the chances are that they, like us, will not be as pleased with the rind as they are with the flesh.

If you do give a bit of rind to your hammie, be sure that it has been thoroughly washed to remove any traces of pesticide.

While humans can and do eat watermelon seeds, they are not recommended for hamsters.

We could not find any research on hamsters and watermelon seeds, which likely means it hasn’t really been studied much. For that reason alone, you should probably forget about feeding watermelon seeds to your hamsters – we simply don’t know if seeds might be a choking hazard, or if it could scratch their cheek pouches.

Eating watermelon is an excellent way to stay hydrated. But ironically, one of the best reasons for humans to eat watermelon results in one of the worst outcomes for hamsters: diarrhea.

It’s all too easy for a hamster to ingest too much water by eating watermelon, with watery stools and diarrhea the end (ahem!) result. Vomiting and gastrointestinal upset are other potential side effects.

The high sugar content in watermelon can also disrupt the digestive system, another reason to introduce watermelon slowly and in small pieces.

If you want to treat your hammie to watermelon, do so gradually. A small bit once or twice a week should be enough for you to get an idea of how he tolerates watermelon.

The Syrian hamster is the best known of the various hamster species, and the type that you most likely will meet in the store.

Although commercial hamster food contains the nutrients necessary for Syrian and Dwarf diets, hamsters enjoy fresh fruit and vegetables, too. Celery, carrots, and broccoli are some of their favorites!

So, is it okay to supplement their favorite vegetables with fresh watermelon?

While watermelon is unlikely to do serious or lasting harm to your little one, it contains high amounts of sugar, something that hamsters don’t require in their daily diet.

A watermelon by any name tastes just as sweet

Watermelon is closely related to squash, cucumber, and pumpkin. In the U.S. we eat watermelon more than any other melon (by weight).

There are over 100 varieties of watermelon available, some with evocative names such as Yellow Baby, Sangria, Jack of Hearts, Cotton Candy, and Crimson Trio.

When the warm currents of summer settle in, I’m among the first in line for the earliest watermelon of the season.

Have you ever walked by a watermelon stand and witnessed people thumping, shaking, sniffing and generally acting a bit odd with the watermelon? It’s all in the name of sizing up the ripest, juiciest melon in the bunch.

Every watermelon aficionado has her own tried and true way of judging the perfect watermelon. But some methods seem to work better than others.

So we went straight to the experts to learn what to look for when choosing the ideal watermelon for you (and maybe your hammie, too!). 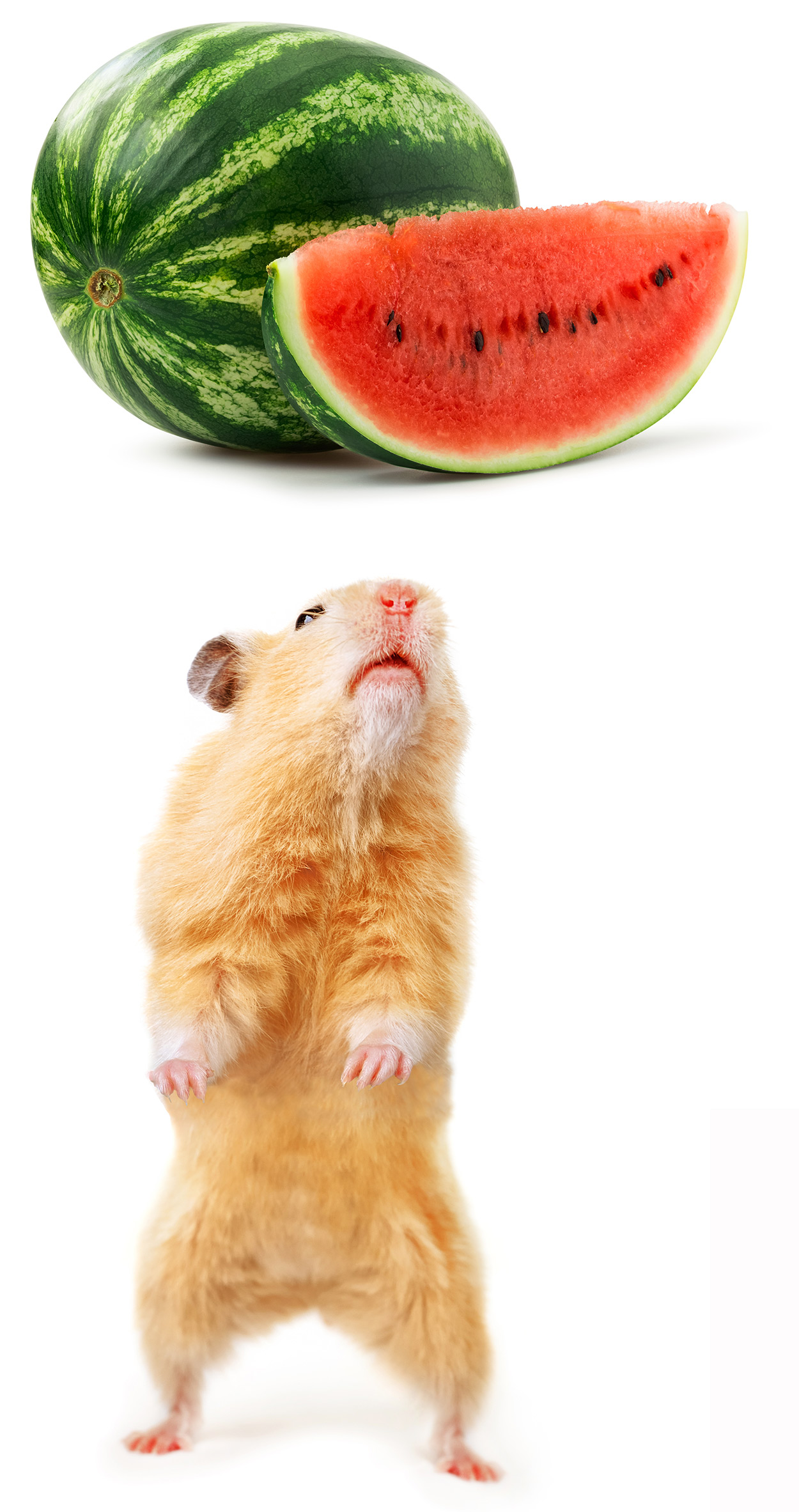 How to pick the perfect watermelon

First off, professional watermelon pickers turn the melon upside down, looking for a pale yellow spot where the rind rested against the earth. To them, this buttery mark indicates ripeness.

In the supermarket you should do the same, since unlike some produce, watermelon does not ripen after being removed from the vine.

A pale green or white spot under the melon indicates that it was not ripe when picked.

Next, perform the, “eyeball test.” Look your watermelon over carefully, insuring that there are no cuts, bruises or soft spots.

Sometimes the vendor will halve a melon and set it on display next to the uncut melons. While there is no guarantee that every watermelon will have the same internal characteristics, the cut one should display a deep, red color that is flecked with mature (dark brown or black) seeds.

Uncut watermelon can be kept at room temperature for a couple of weeks. Once you’ve sliced into the melon, cover the remaining pieces in plastic and keep for about 2-3 days in the refrigerator.

If you do offer a bite of watermelon to your hammie, make sure it is a small bit, not more than she can eat within the day.

It goes without saying, but leaving fresh food too long in your hamster’s cage invites mold to set in, as well as inviting your pet to eat more than may be good for it.

Which is it? Fruit, or vegetable?

To end the confusion once and for all, I think we should refer to the highest authority within the field for the answer: The National Watermelon Promotion Board (NWPB).

The Florida-based non-profit group was formed in 1989 and represents 1,500 watermelon growers, importers, and shippers nationwide. Part of the NWPB’s goal is to educate the public about the nutritional and culinary benefits of watermelon.

What does the group have to say about the watermelon’s dual personality? They unabashedly, unreservedly proclaim the watermelon to be a fruit—botanically speaking.

The NWPB website states, “It is the fruit of a plant originally from a vine of southern Africa.”

But, the NWPB  claims it is also a vegetable, based on the Webster’s Dictionary definition that says a vegetable is anything made or obtained from plants. The site’s FAQ notes that watermelon is a member of the cucurbitaceae plant family, and is cleared from the field like vegetables.

There you have it. Watermelon can be considered both a fruit as well as a vegetable!

No matter what you call it, we can all agree that watermelon is a one-of-a-kind taste treat.

Can hamsters eat watermelon? – A Summary

If you introduce your hamster to tasty watermelon, it’s a good idea to watch as she explores and tries the new treat. You’ll know pretty quickly if she likes it or not.

If your hammie gives paws-up to the new snack, remember that moderation is key.

Provide a taste of watermelon once or twice a week, and never in an amount that she can’t eat within the day. Side effects of the ruby-red fruit are most likely to be watery stool and diarrhea.

As part of a balanced diet, watermelon has shown the potential to affect the course of certain human, health-related issues.

But hamsters can get along just fine without watermelon. The choice to share a tiny piece with your pet is really up to you! 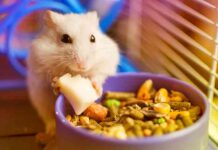 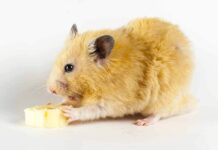 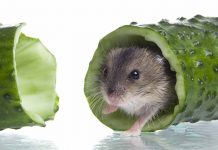