A pregnant mouse carries her babies for three weeks, before giving birth in her nest.

Pet mice might become pregnant as part of a planned breeding program. Or by accident because two cage mates were incorrectly sexed.

Either way, a pregnant mouse needs the same care in the lead up to the birth of her pups.

Read on for tips and guidance to care for a pregnant mouse.

If you don’t yet know anything about it, there are a lot of interesting things to discover about pregnancy in mice.

You can click above to find out more about each of these things.

We’ve got lots of facts and insight about mouse pregnancy in this article.

But what we don’t have is space to cover is an in depth exploration of the pros and cons of breeding mice.

So if you’re still deciding whether to breed from your mouse, bear in mind there are lots of things to plan for besides the pregnancy.

But for now, let’s get back to dealing with the nitty gritty of mouse pregnancy, starting with some pregnant mouse facts!

Female mice can get pregnant from around 6 to 8 weeks old.

So if you want to avoid responsibility for a pregnant mouse, make sure males and females (including siblings!) are separated from 5 weeks old.

Their fertility ends (meaning they can no longer get pregnant), approximately 7-8 months later – typically between 9 and 10 months old.

Female mice can get pregnant all year round. Unlike humans, who are fertile once a month, female mice come into estrus every 4 or 5 days!

The average gestation time for mice is 19 to 21 days.

How Can You Tell If A Mouse Is Pregnant?

Whether you’re trying to identify an unplanned pregnancy, or confirm a premeditated one, alas there is no such thing as a mouse pregnancy test to supply the answer!

But there are some signs to look for.

If you’ve deliberately placed your female mouse in with a male in order to breed from them, you can check her every morning for evidence that they have mated in the night.

Female mice who have mated successfully form a waxy off-white plug at the entrance to their vagina. It is usually quite easily visible if you very gently take a look.

You’ll need to check for it quite early in the morning – it will fall out of its own accord by lunch time.

The plug doesn’t guarantee that you have a pregnant mouse. But once you have established that she is pregnant, it will give you a pretty clear idea of when she’s likely to give birth.

Even before you can see that she’s expecting, a pregnant mouse’s instincts will kick in. And planning a safe place to give birth will be her top priority.

She’ll build an extra large nest, and spend lots of time preparing it, adjusting it, and making it just-so for the arrival of her pups.

But others – especially those expecting big litters – end up looking like they’ve swallowed a tennis table ball!

Mice are rarely visibly pregnant in the first week, but their nipples may start to appear more prominent.

If you’re actively looking for signs of pregnancy, you might notice a pregnant mouse’s waistline start to expand during the second week after mating.

In the third and final week of pregnancy, most pregnant mice are obviously thicker around the middle.

But if this is your first warning that she’s carrying babies, you don’t have long left to prepare!

Do you pride yourself on being closely attuned to your mouse’s little habits, preferences, and idiosyncrasies?

In that case, you might notice some changes in your mouse’s behavior which give away her pregnancy before you can see it!

Besides nesting, pregnant mice might start hoarding food and avoiding her cage mates – especially the male mouse, if she’s still in with him.

She might also go off being handled, even if she is usually friendly.

How Long Is A Mouse Pregnant For?

Mouse pregnancy lasts for 18 to 22 days – or three weeks.

Variation in the length of pregnancy is largely genetic, but other factors influence it as well:

It’s almost hard to believe that a mouse pup can go from sperm and egg to ready to be born in just three weeks.

Let’s see what you can expect from each stage of such a lightning fast pregnancy.

Let’s take it week by week:

There’s not an awful lot to see in week one, but inside her body the pregnancy is busy getting established.

During the first 5 days of this week, a newly pregnant mouse is susceptible to the Bruce Effect, also known as pregnancy block.

If she is exposed to the scent of an unknown male mouse during this period, her body will terminate the pregnancy.

So to preserve a pregnancy, make sure she isn’t exposed to strange male mice, or their soiled bedding.

Towards the end of the week your pregnant mouse might also have a visibly wider waist line.

If the buck is still in the cage with her, she is likely to start avoiding him. Remove him as soon as you have confirmed the pregnancy, since he may try to kill the babies when they’re born.

At the end of the second week, it is usually possible to feel a pregnant mouse’s pups inside her belly.

However, we don’t recommend trying to do so! Her pups are very fragile, and easily injured or killed inside the uterus if you press or squeeze them too hard.

Physical exams to confirm pregnancies are best left to vets.

During the final week of pregnancy, mice gain weight rapidly.

When you look down on a mouse from above this week, her pregnancy is likely to be obvious.

You might even see the babies pushing the outline of her abdomen into irregular shapes!

Towards the end of the week, the pregnant mouse may become listless and fidgety. Or hunker down and get ready for the birth.

Parturition (the action of giving birth) is very quick – it’s usually over and done within three hours.

On the whole, pregnant mice are capable of giving birth without any human intervention, and prefer to do so.

If that describes your mouse, we recommend getting advice from a veterinarian or more experienced breeder ahead of the big event.

After a successful birth, you’ll be able to hear the pups squeaking for their mom’s attention inside the nest.

Don’t disturb them for the first seven days though, and only open the cage to put fresh food and water down.

Baby mice are born deaf and blind, but by the time they’re two weeks old they will have developed so much that they look like small adults.

How Many Babies Do Mice Have?

In a single pregnancy, a female mouse may carry anything from 4, to over 12 babies, which are called pups.

Fertility and litter size is affected by inbreeding, so breeders pursuing a specific appearance by line breeding (mating related individuals) may see a decrease in litter size.

Over a female mouse’s entire reproductive lifetime, she can carry up to 15 litters a year, producing nearly 200 pups!

Caring For A Pregnant Mouse

Mice have the potential to be prolific breeders – just ask anyone who has them as unwelcome guests in their home!

And for the most part a pregnant mouse can see a pregnancy through and raise her litter quite independently.

But that’s not to say that there’s nothing you can do to make her life more comfortable!

Keep her cage somewhere warm and quiet, and make sure she experiences normal daylight cycles – either through a window, or by using a daylight lamp.

A pregnant mouse may abort their pups or eat them straight after delivery if they don’t have enough food or water, or their housing is overcrowded.

So keep providing fresh food and water everyday, and make a frank assessment of whether there is enough space in your cage for your expanding brood.

Ahead of the birth, provide your pregnant mouse with plenty of clean nesting material, such as shredded paper or cardboard.

Don’t try to handle her if she loses interest in interacting with you for a while – she’s got her mind on other matters!

And finally resist the urge to try and find the pups or handle them in the first week after they’re born.

A pregnant mouse has just three short weeks in which to get ready between mating and giving birth.

She’ll take matters in paw by building a cosy nest, and hoarding food in it ready for the nursing period.

When she gives birth, there can be upwards of 12 pups in her litter.

She won’t need much in the way of help from you during pregnancy and parturition.

Just keep maintaining the same high standard of care you always give, and give her space if she would prefer not to be handled during this time.

Do You Have Experience Of Caring For A Pregnant Mouse?

We’d love to hear your story – please tell us how it went in the comments box down below! 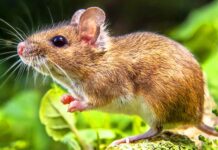 What Do Wild Mice Eat? 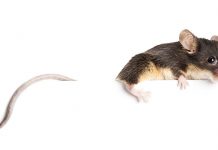 Can Mice Climb Trees, Walls Or Even Glass? 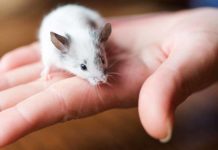