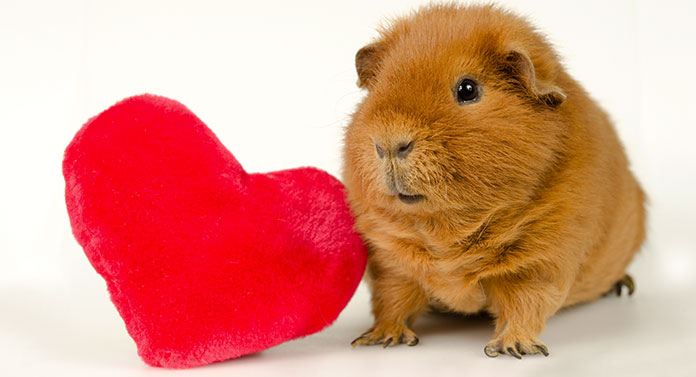 This is a complete, fully-researched guide to the Rex guinea pig breed. If you want to know what sets Rexes apart from other guinea pigs breeds, if they make friendly pets, and whether they’re easy to care for, then we’re here to help.

Rex guinea pigs are known for their short, wiry coats, which stand out from the body. They have a low international profile but a loyal fanbase in the United Kingdom.

These are some of our readers’ most frequently asked questions about the Rex breed:

What’s In This Guide to the Rex Guinea Pig

Or you can join us to find out everything their is to know about the cuddly Rex, including:

What is a Rex Guinea Pig

The Rex guinea pig is a short-coated coarse-coated breed. It is affectionately known as one of the ‘potato’ breeds, because the way its coat stands out from its body tends to give it a rather potato-esque silhouette.

The Rex belongs to the same species as all other pet guinea pigs: Cavia porcellus. It’s coat is the most significant difference between it, and the other guinea pig breeds. A common misconception is that ‘Rex’ is the British name for the Teddy guinea pig. But they are actually different breeds, and their coats are caused by different genetic mutations.

Where Does The Rex Guinea Pig Come From?

The Rex breed was founded in Britain in the 1970s and 80s, from a single red-colored boar with a Rex coat, owned by a gentleman called Fred Holmes. Holmes’ boar carried a recessive genetic mutation which gave him a short, crimped coat, and all Rex guinea pigs can trace their lineage back to him! Coarse coated guinea pigs were unusual in the UK at the time, so the new breed quickly caught people’s attention and grew in popularity. The British Cavy Council agreed a standard for the new breed in 1984, and the Rax Cavy Club was formed in 1991.

Today, almost all Rex guinea pigs still live in the UK. A small number are bred in other countries, including South Africa. But so far they haven’t gained much of a foothold in the U.S. This is likely to be because they’re very similar to the Teddy guinea pig breed, which is already well established there.

Are Rex And Teddy Guinea Pigs The Same?

Rex and Teddy guinea pigs look very similar, but they get their distinctive coats from different genes – known as the rex gene and the teddy gene respectively. Here’s how to tell the difference between a Rex vs Teddy guinea pig:

What else do you need to know about Rex guinea pig appearance?

The Rex’s coat is short – usually shorter than half an inch. Each hair follicle is crimped, including their whiskers, which can have eccentric bends in them. Rexes are allowed at breed shows in all colors, but the agouti colors are the most popular. Agouti coats have bands of color on each shaft of hair. Some Rexes have curly or wavy hair on their belly, but they should never have rosettes.

Rex guinea pigs grow 8 to 10 inches long, and weigh 1 to 3 pounds as adults. This is about the same as all other guinea pig breeds.

So far, there’s no credible evidence that different breeds of guinea pigs have distinct temperaments. All guinea pigs are curious, chatty, amusing, and affectionate with each other, and their humans. Since they are naturally a prey species, they can be wary of people at first, and panic if you loom over them, or reach for them suddenly. But if you approach them gently and bring treats, they will quickly warm up to you.

To find a Rex guinea pig with a lovely personality, chat to breeders, and ask to meet their breeding stock. All breeders should breed for good health, but some breeders pursuing perfect show-quality cavies might make compromises on how sociable they are. Make sure your breeder handles their baby cavies regularly, and invest some time introducing yourself and building up a bond with them when you bring them home.

Guinea pigs rarely bite. When they are frightened, they try to get away instead. But they might deliver a nip if they are scared enough, and they can’t escape. Guinea pigs have also adapted to graze almost continuously on food as a survival strategy, and some pigs will nibble just about anything once to see if it’s food. This usually tickles rather than hurts, but it can startle young children!

Well-bred guinea pigs are robust little pets that live between 4 and 8 years. Common health problems of cavies include:

There aren’t any documented health risks which are specific to the Rex breed, but something that hasn’t been properly investigated is the impact of having broken whiskers. The rex gene which causes their coat to be wiry and crimped also affects their whiskers, which tend to be bent and break easily. And whilst we know that guinea pigs don’t rely on their whiskers as much as rats and mice, we can’t rule out that they may use them for tactile social behaviors, or as an early warning system to protect their eyes when they explore. If this is the case, then deliberately breeding cavies with broken whiskers poses a welfare issue.

Rex guinea pigs can live indoors, or outdoors if your climate is mild enough. They only have a single coat without guard hairs, so they are slightly less suited to cold temperatures than other breeds. In their hutch they need:

You can line their hutch with sawdust that you replace every few days, or with a fleece liner that goes in the washing machine.

Guinea pigs are a social species, so they need the company of at least one other guinea pig. Unrelated males may fight, so brothers, unrelated sows, or sows and a neutered male are the best combinations. There’s no reason why you can;t keep your Rex pigs with other breeds, such as the Abyssinian or the American.

No. In dogs there is a persistent myth that many curly- and wire- coated breeds are hypoallergenic. This isn’t actually true of dogs, and unfortunately it isn’t true of guinea pigs either. If you suffer from a guinea pig allergy, then you are likely to have an allergic reaction to Rexes too.

How Much Does A Rex Guinea Pig Cost?

In their homeland, Rex guinea pigs typically change hands for about £30. But, breeders might be able to ask a little more for a show quality pig, a litter with unusual colors, or if they live in a region where demand is greater than supply. Outside of the UK it is hard to predict the price of a Rex guinea pig because they are so rarely owned or offered for sale. But it’s likely to be in the same ballpark as other breeds sold in your area.

Is a Rex Guinea Pig Right For Me?

The Rex guinea pig is a cute, relatively low maintenance variation on a textured coat. Realistically, they’re most likely to be an option for you if you live in the United Kingdom. They have a lively and active breed club, so they might be a good choice for you if you’re keen to get involved in the social side of owning guinea pigs.

Elsewhere in the world, you might want to consider one of these alternative cavy breeds with curly coats instead:

Do you have a Rex Guinea Pig?

Do you have a Rex Guinea Pig living at home with you? We’d love to hear all about them in the comments below!

Fawcett. Management of husbandry-related problems in guinea pigs. In Practice. 2011.

Witkowska et al. The Effects of Diet on Anatomy, Physiology and Health in the Guinea Pig. Journal of Animal Health and Behavioural Science. 2017.